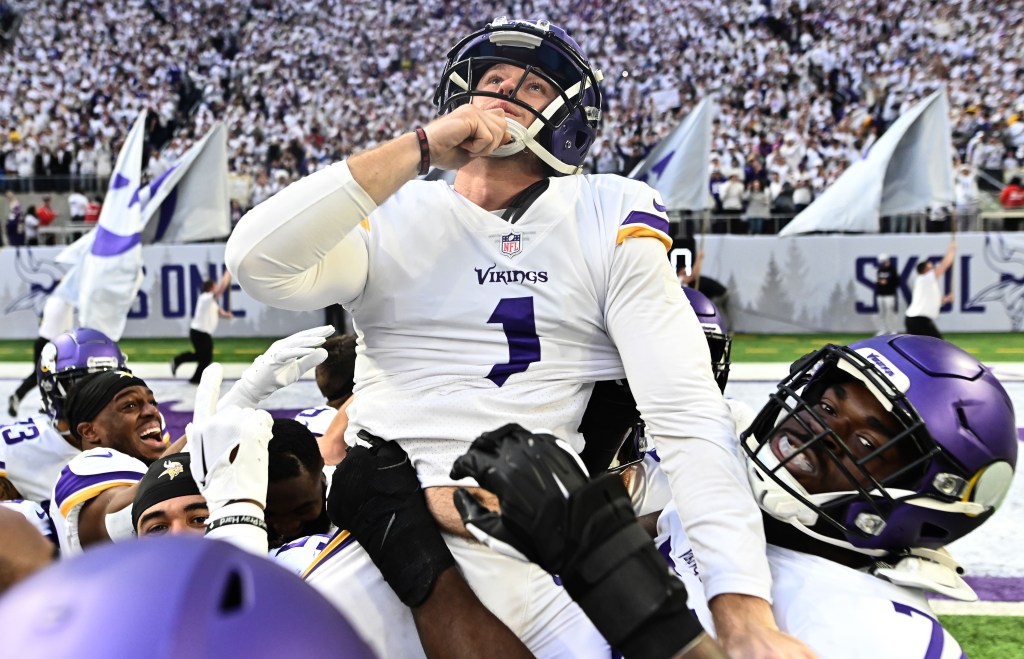 To achieve a 13-4 record and secure the No. 3 seed in the NFC, the Vikings had to rely on their star power. With 1,809 receiving yards, Justin Jefferson surpassed Randy Moss’s previous record. Kirk Cousins — yes, Kirk Cousins — was occasionally mentioned as a candidate for MVP. Dalvin Cook completed his fourth consecutive season with at least 1,100 yards rushing.

Here are five more things to know about the Vikings heading into Sunday’s wild-card game versus the Giants, including statistics and trajectories of lesser-known players who might have significant influence.

According to Vikings.com, Greg Joseph’s 61-yard game-winning field goal in the first meeting was the longest in franchise history, but not quite long enough to crack the top 10 in NFL history.

Greg Joseph is supported by teammates after kicking the game-winning field goal from 61 yards out in the Vikings’ 27-24 victory over the Giants during the regular season.

Nonetheless, the 28-year-old kicker has never attempted a field goal of that distance in a game before; his previous best was 56 yards. However, his last-second field goal stunned the Giants, who are no strangers to losing on such unbelievable kicks. Just ask their current kicker, Graham Gano, who made a 63-yard field goal to beat the Giants when with the Panthers in 2018. This item ranks among the top 10 (really top 14 due to ties).

The Vikings and Giants had faced 30 times in the past, but on December 24, a Minnesota tight end surpassed 100 receiving yards against Big Blue for the first time. T.J. Hockenson caught 13 passes out of 16 targets for 109 yards and two touchdowns.

When Duke Shelley examined his NFL team’s preseason itinerary, he was scheduled to face the Giants in Week 4. The Bears were scheduled to visit MetLife Stadium on that date. However, Shelley was released by the Bears on August 31, signed to the Vikings’ practice squad a week later, and promoted to the active roster on November 12.

Shelley, who led the Vikings with nine solo tackles against the Giants in December, had only six starts and two games with more than seven combined tackles prior to this season. Due to Cameron Dantzler Srinjury, .’s Shelley has made five starts since November 24. Due to Dantzler’s ankle ailment and a personal situation, he will have another potential opportunity this weekend. Shelley, who got his first interception of his career in Week 18 against Chicago, tweeted later that day, “First INT of my career against the team that didn’t believe in me wow thank god.”

After season-ending injuries to backup center Austin Schlottmann and right tackle Brian O’Neill, the offensive line for the Minnesota Vikings has experienced significant reshuffling over the past several weeks. Schlottmann replaced Garrett Bradbury, who is expected to return this weekend after suffering a back ailment.

If Bradbury (who was listed as a tight end during his redshirt season at North Carolina State before converting to offensive line his senior year and not surrendering a sack) is hindered in any way, Minnesota’s third-string center Chris Reed will likely play a significant role in the second straight game. Reed, an undrafted free agent from Minnesota State, was inducted into the USTFCCCA NCAA Division II Track & Field Athlete Hall of Fame after earning 11 All-American awards for indoor and outdoor track & field throwing events during his school career, according to the USTFCCCA website.

The Giants avoided a one-possession game on December 24 at U.S. Bank Stadium, which is the key to upsetting Minnesota this season. The Vikings finished 11-0 in one-possession games and 8-1 at home throughout the regular season, with their one defeat coming against the Cowboys. According to NFL.com, this season has the most victories by a single touchdown in league history.