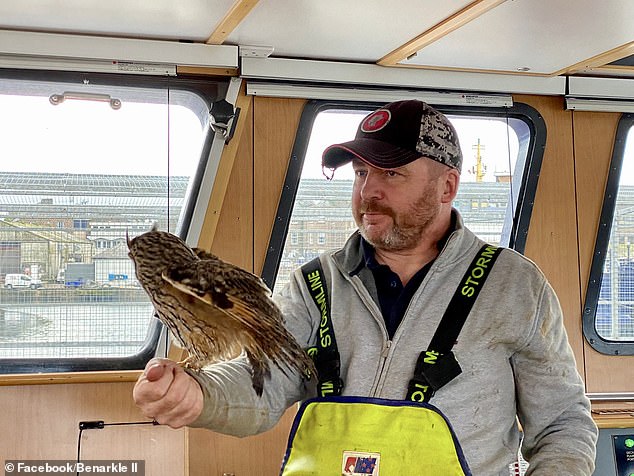 After being blown off course and assaulted by seagulls, a lost owl was found 100 miles off the north shore of Scotland by a fishing team.

The personnel on board the Peterhead-registered Benarkle II treated the bird for minor injuries sustained during the intrusion.

Following initial medical care, the wounded owl was “beefed up” and sounding better, according to the BBC.

When the trawler arrived in Peterhead, the passengers gave the animal to the Huntly Falconry Centre, which acknowledged that it was uncommon to be located in such a remote area.

Last week, the owl unexpectedly boarded the trawler in the midst of their voyage and swiftly adjusted to its new surroundings.

The group said on social media that it had become used to the arrivals and departures of crew in the wheelhouse and had even allowed him out to spread his wings.

Although it’s not the simplest of tasks to convince a reluctant owl to return to his temporary home!

The center’s owner, John Barrie, said that the owl is just exhausted after the trip.

“They had had enough on the boat, and we’ll have plenty here.” It just needs some meat on it.

It must have just been blown off course since it wasn’t in its own habitat, the man said.

‘A few of years earlier, these same men brought in a hobby falcon from a distance of roughly 400 miles.

It’s amusing that they’ve brought in a bird twice. It’s clear that there is a bird expert on board.

When worried or alarmed, long-eared owls may lift their uniquely puffy ears, known as tufts, which are tall and thin.

The breeds are widespread in the UK, however they are less common in Wales and the south-west. In the winter, they prey on small rodents and birds.