Skip to content
Go Home «» News «» Breaking News «» First known stranding of a 6,000-pound killer whale in the southeast US results in its death 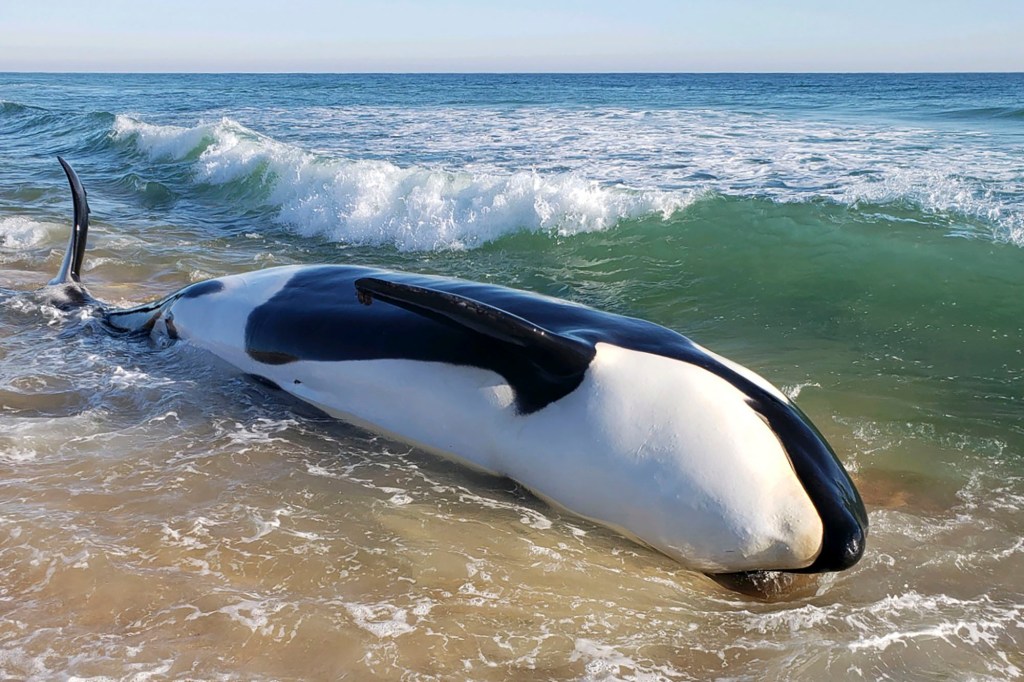 Wednesday, a 21-foot killer whale weighing up to 6,000 pounds died after beaching itself on the Atlantic coast in central Florida. This was the first stranding of its species ever recorded in the Southeast United States.

The adult female orca became stuck before daybreak on a beach in Palm Coast, located more than 60 miles south of Jacksonville, according to a statement from the Flagler County Sheriff’s Office.

Derek Pence was enjoying his customary morning stroll in the vicinity of Jungle Hut Park when he observed a huge object near offshore.

“I observed white on the bottom,” Pence told WESH. I snapped a photo and forwarded it to the biologist I was speaking with, who confirmed that it was an orca.

The eyewitness told the Palm Beach Observer separately that the biologist initially thought he was “crazy” when he stated that the whale resembled an orca.

The apex predator appeared to be alive at approximately 6 a.m., but it had dead by the time rescuers arrived.

“It was terrible,” Pence stated. I was hoping for a rescue rather than a recovery.

The sheriff’s office shared a video of a dead orca with its characteristic black-and-white corpse laying on its side while waves crashed on it.

Orcas are among the ocean’s largest and strongest marine mammals.

A man walking along the beach before sunrise stumbled upon the massive marine creature in the water and afterwards informed a biologist of his terrible discovery.

The orca weighed approximately 3,000 kilograms and displayed no visible symptoms of injury.

“This is exceedingly uncommon. Blair Mase of the National Oceanic and Atmospheric Administration stated, “We have no record of a stranded killer whale in Florida or the southeastern United States.”

Experts do not now know why the whale came up off the coast of Florida or why it perished.

According to Mase, there are no evident symptoms of trauma on the orca.

This is the first reported killer whale beaching in the southeastern United States.
AP

“It may be due to environmental variables. There may be some illness effects. “Noise could potentially affect their equilibrium,” stated Mase.

Messod Bendayan, a spokesperson for the sheriff’s office, said in an email that crews from the Hubbs-SeaWorld Research Institute, the Florida Fish and Wildlife Conservation Commission, and the sheriff’s office were present to put the carcass onto a vehicle so that a necropsy could be completed.

It may take weeks or even months to discover the cause of the whale’s death and odd beaching.

CNN was told by the administrator of the Marine Mammal Stranding Program for the Southeast Region of the National Oceanic and Atmospheric Administration, Erin Fougeres, that veterinarians, highly qualified biologists, and pathologists will be on hand to perform the necropsy.

The carcass was loaded onto a truck and transported to a location where a necropsy will be conducted.

She continued, “They will dissect the whale and examine every organ system for gross lesions or anything obviously wrong with the different organ systems, and they will take extensive samples from the whale, which will then be sent to a lab, or multiple labs, for analysis.”

According to NOAA, there are approximately 50,000 killer whales in every ocean on Earth, but they are most numerous in colder areas such as Antarctica, Norway, and Alaska.

Orcas are vulnerable to becoming entangled in fishing gear, suffering from a shortage of food as a result of overfishing, and being contaminated by wastewater treatment plants and oil spills.

»First known stranding of a 6,000-pound killer whale in the southeast US results in its death«