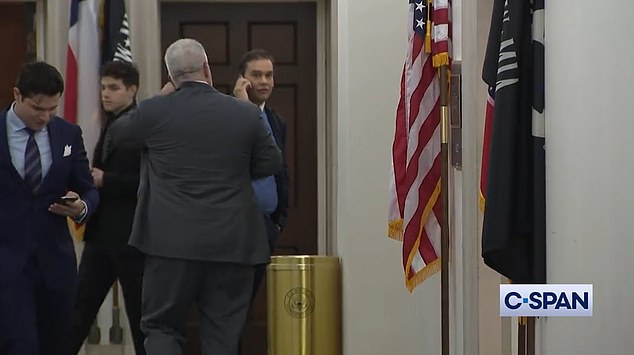 Scandal-hit Republican George Santos snubbed reporters’ queries and avoided his Capitol Hill office when he arrived at the Capitol for the first time since his web of falsehoods came to light.

The Congressman-elect, who is currently facing criminal investigations in the United States and Brazil and is already facing calls for his resignation from both Republicans and Democrats for multiple fabrications about his background, arrived sheepishly at the Longworth Building to prepare for his inauguration.

ABC correspondent Lalee Ibssa hammered him with numerous questions, including, “Are you qualified to serve in this Congress?”

As he rounded the corner to enter his office, he spotted a group of reporters and veered away from them.

Scandal-hit Republican George Santos evaded reporters’ inquiries and avoided his Capitol Hill office when he arrived at the Capitol for the first time since his web of falsehoods became known.

The Congressman-elect, who is now facing criminal investigations in the United States and Brazil and is already facing calls for his resignation from both Republicans and Democrats for multiple fabrications about his background, arrived sheepishly at the Longworth Building to prepare for his inauguration.

His fabrications and lies cover practically every aspect of his life, from his educational background to his family’s lineage and criminal history.

He has acknowledged to making false statements concerning his employment at Citigroup and Goldman Sachs, as well as his attendance at Baruch College and New York University.

Additionally, Santos was criticized for falsely claiming his grandparents were Holocaust survivors, distorting information about his mother’s employment, and failing to disclose his marriage until just before his first candidacy for Congress in 2020.

Federal and state officials are currently investigating if his lies have ever violated any laws.

ABC correspondent Lalee Ibssa hammered him with numerous questions, such as, “Are you qualified to serve in this Congress?”

The New York Times reported on Monday night that Brazil has renewed an inquiry into charges that he used a stolen checkbook to spend over $700 under a phony name.

The case was put on hold for ten years because he could not be located.

After the event in 2008, Santos apparently confessed on a Brazilian social media website the following year, writing, “I know I made a mistake, but I’m willing to pay.”

In 2022, however, the new representative informed the New York Post that he had never committed a crime.

Santos stated, “I am not a criminal here, in Brazil or anywhere else in the globe.”

Members of Congress from both parties have demanded a comprehensive investigation of Santos’ ethical conduct.

Santos must take his position because he was elected. To remove him would require the approval of two-thirds of Congress.

As Santos won a 50/50 seat that the Democrats could retake in a special election, it is possible the Republicans do not totally support his ouster.

The lies and tales George Santos has said up to this point: From faking family ties to the Holocaust, to 9/11 killing his mother, to working on Wall Street, to recuperating from a brain tumor, to being of Ukrainian-Jewish origin, to founding a charity, Trump has a long list of scandals.

His fabrications and lies cover nearly every subject, from his educational background to his family’s history.

Santos switched the New York seat from blue to red and is on course to become the first out gay Republican member of Congress.

On December 19, The New York Times was the first to break the story of Santos’ resume alterations. They noted that there was no indication that Santos had ever worked for Citigroup or Goldman Sachs and that he had never attended Baruch College.

Now, he is under investigation by both federal and municipal authorities in New York, as additional allegations regarding his past surface.

In one interview, Santos revealed that his mother’s maiden name was the historically Jewish Zabrovsky.

In February, Santos told Fox Digital that his grandfather was born in Kyiv and left in the late 1920s to immigrate to Belgium, where he met my grandmother and built a family. For many people who are descendants of World War II refugees or Holocaust survivors, many names or documents were changed in the name of survival, as was the case with our family.

After winning the midterm elections in 2022 to represent New York’s 3rd congressional district, George Santos’ pathological lying was uncovered. His fabrications and lies cover nearly every subject, from his educational background to his family’s history.

According to the Forward, there have been no successful efforts to identify Jewish or Ukrainian ancestry in his family history.

In a different interview in 2020, Santos revealed that he was raised by a white Caucasian Belgian immigrant mother. However, Fatima Devolder, the mother of Santos, was born in Brazil, according to her 2016 obituary.

In addition, recently rediscovered messages indicate that Santos, a Brazilian-American, claimed on Twitter in July 2020 that he was mixed, or ‘Caucasian and black.’

Santos asserts that his mother perished in the 9/11 attacks.

Because his mother was a victim of the terrorist attack, Santos tweeted in July 2021 that he was ‘blocking’ an account with the handle ‘9/11 was a victimless atrocity’

After the user responded to a tweet from Santos about immigration, he said, “9/11 took my mother’s life… thus I’m blocking so I’ll never have to see this again.”

However, according to her obituary, Santos’ mother passed away in December 2016, which is more than 15 years after the attack.

In a December 2021 tweet, he also revealed the actual date: ‘This December 23rd marks five years since I lost my best friend and mentor. Mom, you will always be in my heart.

Santos’ campaign website stated that his mother’survived the sad events of September 11th’ in her office in the South Tower of the World Trade Center and ‘lost her fight with cancer a few years later.’

According to a New York Times article, Santos’ mother was a domestic servant or housekeeper.

On his campaign website, his mother was touted as a prominent executive.

The website adds, “George’s work ethic comes from his mother, who rose from little to become the first female executive at a major financial firm.”

The congressman-elect tweeted in 2021, ‘9/11 took my mother’s life,’ however Fatima Devolder died of cancer in 2016, and it is unknown whether her death was related to 9/11. Also unknown is if she was an executive or a housekeeper.

Representative-elect stated that he attended Horace Mann School, a prestigious private school in the Bronx with an annual fee of $59.800.

‘He began Horace Mann preparatory school in the Bronx, but did not graduate due to financial hardships for his family,’ stated a 2019 biography during his first unsuccessful bid for Congress.

It adds, “During his senior year, he received his GED.”

CNN reports that the school stated he never went.

Ed Adler, a representative for Horace Mann Prep School, stated, “We have examined the records, and there is no indication that George Santos (or any alias) attended Horace Mann.”

Santos previously stated that he worked for Goldman Sachs and Citigroup on Wall Street, but he now claims he used a ‘bad choice of words’ when defining his association with the two companies.

Between October 2011 and July 2012, the incoming representative worked at a DISH Satellite call center.

In an attempt to support his deception, he also worked for LinkBridge, where Santos claimed he did business with Goldman and Citi and facilitated ‘capital introductions’ between clients and investors.

Santos stated that he had “never worked directly” for either company.

On New Year’s Eve, George Santos (right) poses with his then-fiancée at Mar-a-Lago.

In February 2021, Santos wrote on Twitter that’my family and I’ had not received rent on 13 houses he purportedly owned.

A study of property taxes owed or paid in the state of New York reveals no indication of ownership.

He asserted having a brain tumor.

On March 30, 2020, at the beginning of the U.S. coronavirus pandemic, a YouTube interview with Santos titled ‘George Santos: A Corona Story’ was published. Since then, the video has been made private.

In the video, Santos tells two men, one wearing a ‘Guns and Freedom’ hat and the other seated beside a ‘Don’t Tread on Me’ flag, that he “battled a brain tumor,” according to Newsweek.

Regarding his health, Santos stated, “I suffer from immunodeficiency and acute chronic bronchitis.” I also fought a brain tumor a few years ago and underwent radiation treatment, which significantly reduces your immune in general.’

Claimed to have lost four employees in the Pulse nightclub shooting.

In an interview with WNYC, Santos claimed that four ‘people who work for me’ were among the 49 victims of the June 2016 mass shooting at the Pulse nightclub in Orlando, Florida.

No connection has yet been established between Santos and any of the victims.

He claimed to be the founder of a charitable organization.

Santos stated that he formed Friends of Pets United, a tax-exempt animal rights organization that rescued over 2,500 cats and dogs.

However, neither the IRS nor the New York or New Jersey attorney general’s offices were able to locate records proving Friends of Pets United’s registration as a nonprofit organization.

However, according to public documents, Santos was previously married to a Brazilian woman named Uadla Vieira until 2019.

In 2016, Santos said he was robbed on his way to pay his Queens apartment rent.

In an affidavit opposing eviction, he claimed $2,250 was stolen. According to Gothamist, he wrote: “I was robbed at approximately 1:15 p.m. on January 15, 2016 on Queens Boro Plaza as I was on my way to pay my attorney.”

I have requested a stop payment at the check cashing location located at 31st Street and 23rd Avenue in Astoria.

‘I am unable to provide a police report today as I was requested to go back Tuesday to pick it up.’

The NYPD has no record of the occurrence, according to the news source.

Santos eventually moved out of the apartment as a result of the case and paid the rest of what he owed in rent.

»First day in Congress, Republican liar George Santos walks AWAY from his office«