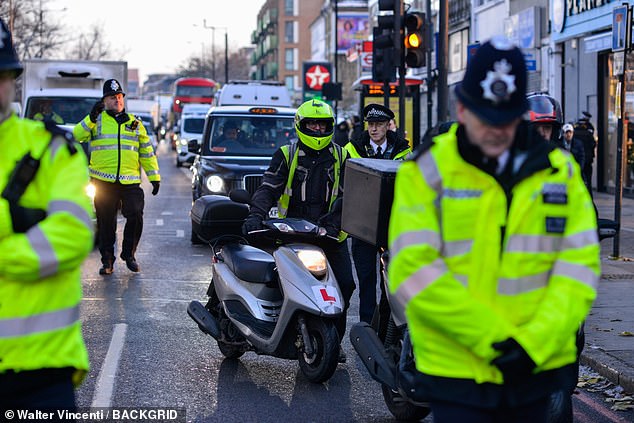 Just Stop Oil’s final demonstration before Christmas is a “slow march” through the streets of north London after a year of attention-grabbing spectacles.

Around 7.30 am, a group of 17 people left Finsbury Park near Manor House station, all of them wearing beanies, scarves, and gloves to stay warm as the outside temperature plunged to -2C.

It’s known that further protests will occur in Camden later this morning.

They trudged along the street agonizingly slowly while carrying banners sponsored by Just Stop Oil, grinding the northbound lanes to a halt behind them.

Despite two arrests on the first day of the slow marches, the group told demonstrators that their activity was lawful in an effort to persuade them to support the cause.

Additionally, a spokeswoman stated that this would be the last leisurely march before Christmas, prompting others to accuse them of ‘wanting to keep warm’ and avoiding the bitter cold.

The group is opposed to the proposed Cumbrian coalmine, which would boost carbon dioxide emissions by around 400,000 tonnes annually while creating up to 500 new jobs.

“You should be ashamed, Mr. Sunak, for enabling your administration to facilitate the expansion of the oil and gas industry and for approving a new coal mine that neither the public nor the environment require.

Shame on you for demonizing nonviolent protesters. You can forbid us, despise us, or imprison us, but that won’t stop us. We won’t participate in the eradication of everything we value.

Due to her involvement with Just Stop Oil, Ms. Shatford had previously served 13 days in jail.

The harsh reality is unsettling, according to Londoner Peter Smith, 30, of Harringey. We have no future if we keep going in the current direction.

We risk starvation, misery, and the loss of everything we value. Normal people need to stand up and support Just Stop Oil in their efforts to halt new licenses for fossil fuels and advance toward a sustainable future.

“I worry about the future of my kids.” I make decisions with both my heart and head. I am confident that politicians can act morally if they pay attention to the facts. Our lives are being burned away by their inaction.

The most recent move follows months of nonstop disturbances that enraged the public, causing road closures and causing mayhem on the streets.

In the months of October and November, there were over 700 arrests, and from the start of the protests on April 1 there have been over 2,000 arrests of Just Stop Oil supporters.

According to the organization’s statement, there are still about 24 sympathizers behind bars.

‘Just Stop Oil continues to peacefully oppose the government’s intentions to license more than 100 new oil and gas projects by 2025 and its failure to keep its commitment to assist people with their soaring energy costs,’ a representative stated.

They are contributing to the deaths of millions of people and hastening the dissolution of the orderly society that supports democracy by continuing to promote the development of new oil and gas.

Two ladies who are suspected of damaging a Van Gogh painting by hurling Heinz soup at it will go on trial soon.

Earlier today, as part of a larger pledge to alter present energy policy, HSBC disclosed it will no longer lend money or capital to new oil and gas projects.

Given the current global energy crisis, the British bank stated that it will continue to support natural gas projects that are already in the works, but it also stated that it wanted to align itself with the Paris Agreement’s net zero by 2050 or earlier ambitions.