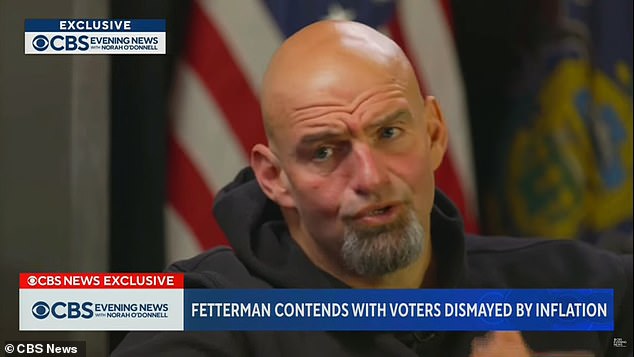 John Fetterman, the Democratic candidate for the United States Senate in Pennsylvania, has defended his refusal to reveal extensive medical records in response to queries about his fitness while he recovers from a catastrophic stroke.

Fetterman told CBS Evening News on Thursday, ‘We have displayed and disclosed more types of medical evaluation than probably anyone, unless you’re running for president.’

However, Fetterman has rejected efforts to provide extensive medical records or permit interviews with his physicians, instead pointing to a one-page doctor’s statement he released last month stating he has “no work restrictions” and “can work full-time in public office.”

Dr. Mehmet Oz, Fetterman’s Republican opponent, provided a four-page statement from his doctor in September, after The Washington Post and The Pittsburgh Post-Gazette editorial boards demanded that both candidates share their medical records.

After suffering a stroke in May that left him with auditory processing difficulties, making it difficult for him to understand spoken words at times, 53-year-old Fetterman says he is fit to serve.

“We already knew it was going to be an issue, given that the individual is recovering from a stroke. It has also been a difficult time for my family,’ Fetterman said CBS.

As he had in previous interviews and his October 25 discussion with 62-year-old Oz, Fetterman displayed the interviewer’s questions on enormous screens.

CBS also disclosed that the captions were created by a human stenographer who sits behind the scenes and types up the dialogue in real time.

Fetterman has claimed that he does not have a hearing impairment, but rather persistent difficulties understanding spoken discourse, which are aided by the written subtitles.

The consequences of Fetterman’s stroke were evident during the discussion, as he struggled to complete sentences and provided unclear justifications for his positions, such as whether he is for or against fracking.

In an interview with NBC News last month, the candidate was initially shown using written captions to better understand the questions being posed to him.

Gisele Fetterman, the Democratic candidate’s wife, deemed the comments offensive to persons with disabilities and sought apologies from media sites that raised worries about his health.

The Pittsburgh Post-Gazette, the main newspaper in Fetterman’s home county, endorsed Oz’s campaign on Sunday despite these objections.

Mr. Fetterman suffered a severe stroke in May, but his health is not the problem. The Post-Gazette said in its endorsement that his lack of transparency in refusing to reveal his medical information is disturbing. It implies a desire to conceal and mistrust of the populace.

They added, “All candidates for major public office should submit their medical records, as did Mr. Oz.” If you value your privacy, avoid running for public office.

Oz, a longstanding New Jersey resident, has been accused by Fetterman’s campaign of being a “carpetbagger,” a derogatory phrase for a candidate seeking government in an area where they have little links.

In the interview on Thursday, Fetterman also responded to Oz’s charges that he is soft on crime, a topic that Oz has used as his closing argument in the campaign.

Fetterman stated, in reference to Oz’s long career as a celebrity doctor with a history of making dubious medical claims, that there is a rule known as the Oz rule, which states that while Oz is on television, he is lying.

He stated, “I am the only candidate in this election who has got practical experience combating crime.”

“As the four-term mayor of a municipality for over 14 years, I made gun violence the focal point of my efforts,” he added.

Fetterman was born in York, Pennsylvania, although he served as mayor of his adopted city of Braddock from 2006 to 2019. He quit his position as mayor to become Pennsylvania’s lieutenant governor under Democratic Governor Tom Wolf.

Fetterman stated, “We’re going to present our case until the very end.”

Pat Toomey, a Republican, is vacating the vacant Senate seat Fetterman and Oz are running for.

As the Senate is now evenly divided, the Pennsylvania election could determine which party controls the body for the next two years.

Days before the November 8 election, the most recent poll released on Thursday showed Oz seizing the lead over Fetterman for the first time.

According to a poll conducted by The Hill/Emerson College in September, Oz’s popularity among potential Pennsylvanian voters has climbed by 5 percentage points since September, resulting in a two-point lead, 48 percent to 46 percent.

In contrast, Fetterman’s support increased by only 1 percent between September and the most recent poll conducted October 28-31.

The gap between the two candidates remains within the poll’s margin of error of plus or minus 3 percentage points.