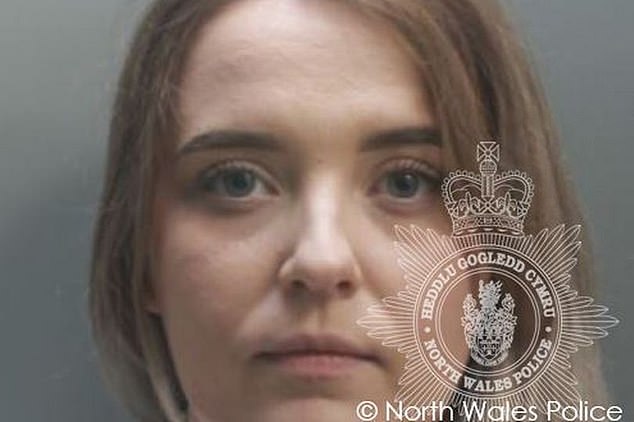 A corrupt prison officer who fell in love with an inmate at a men’s jail and sent him sexually graphic movies on a phone she smuggled in wept as she was sentenced to eight months in prison.

Jennifer Gavan, 27 years old, of Seventh Avenue, Llay, Wrexham, pleaded guilty to misconduct in public office between April and July 2020 at HMP Berwyn, a contemporary prison for almost 2,000 men in the Welsh city.

Gavin wept in court after being accused of engaging in an inappropriate connection with 25-year-old prisoner Alex Coton.

She had accepted £150 in exchange for bringing a mobile phone inside the cell and talking with him via a phone illegally held in Berwyn.

Jennifer Gavan, 27, pled guilty to misconduct in public office between April and July 2020 at HMP Berwyn in Wrexham, Wales

Judge Niclas Parry stated that she had references. However, he stated, “I am surprised that HMP Berwyn personnel are writing letters in support of her and criticizing other Berwyn employees.” I believe that this issue should be brought to the attention of the prison administration.

Coxon, of Rhys Avenue, Kinmel Bay, who had prior drug, robbery, and attempted robbery offences, was sentenced to 10 months in prison after admitting to possessing a prohibited object in Berwyn.

David Mainstone, a prosecutor at the Mold crown court, stated that prison authorities got information about a prospective link. In Coxon’s cell, a phone was discovered stashed inside a prison laptop, along with ‘explicit’ photos of a woman.

Gavan welcomed communication with the convict via Snapchat, sharing a photo of herself kissing the offender.

Mr. Mainstone stated that she refused to reveal her cell phone’s PIN. Gavan, however, has produced “sexually graphic” movies of herself. Call records revealed communication between the tattooed pair.

Alex Coxon (pictured), who had drug, robbery, and attempted robbery convictions, was sentenced to ten months in prison for possessing a restricted item in Berwyn.

The defense attorney Maria Masselis stated that Gavan, clothed in black, had brought a bag to court. She is aware of the situation she is in. She can no longer tolerate awaiting her fate,’ counsel stated.

She still has difficulty explaining why and how she began doing the things she was doing. Clearly, it was a particularly difficult time in her life. She had recently ended a very long-term relationship.

Miss Masselis stated that Gavan had “self-esteem difficulties” but was very compassionate towards convicts during Covid lockdown, when no family visits were permitted. She felt unprepared to manage a wing of 80 male inmates, sometimes on her own for extended periods.

Gavan felt “manipulated” into believing she was in a relationship with Coxon, according to the attorney, who cited “immaturity and a degree of naivete.” She had professed her love for him and sent him photos.

Gavan, a former assistant store manager, was reared by a respectable family. During the delay in filing the lawsuit, she started a new relationship and had a seven-month-old son.

Counsel continued, “She claims that her conduct in regard to these matters feels as though it pertains to a different person.”

HMP Berwyn is a contemporary prison in the Welsh city of Wrexham that houses more than 2,000 male inmates. It is shown in 2017

Judge Parry warned Gavan, who stood in the dock after Coxon had been jailed, “The courts must make it crystal clear that prison staff who engage in misconduct will almost always face immediate detention.”

He stated that cell phones endangered prison safety. Judge Parry stated that an iPhone with obscene photos of Gavan had been discovered and that £150 had been paid to smuggle it behind bars. Gavan arranged to be alone with Coxon when he was on cleaning duty, despite the fact that Coxon had done time for “serious matters.”

“You are a bright young lady.” You held a position with a position of trust,’ the judge told Gavan. Her bank account reflected two payments totaling £200 from the Coxon family.

She acted “completely out of character” and was really contrite, according to Judge Parry. However, he noted, “This matter is so grave that an immediate prison sentence is justified.”

The court heard that Coxon was captured attempting to pass a phone to another inmate by dragging it across a corridor with dental floss. Simon Rogers, the defense attorney, stated that he had since “done his best to turn his life around.”

The judge stated that Coxon’s record was “appalling.”