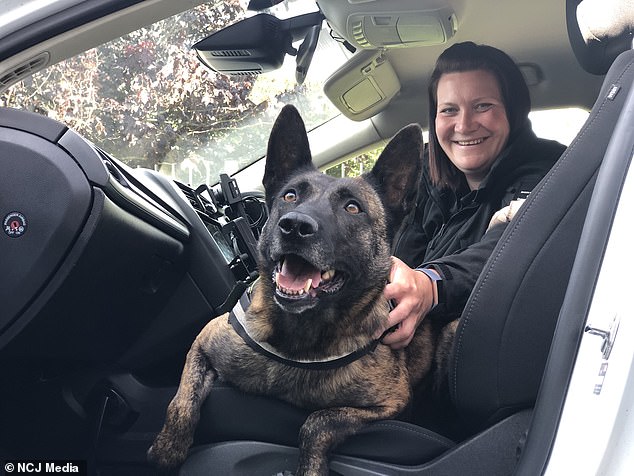 A female police officer discovered sleeping behind the wheel of a patrol cruiser while clutching a bottle of wine while over three times the legal limit for alcohol consumption has been found guilty of misconduct.

A dog walker discovered 38-year-old Northumbria Police officer Helen Kane’slumped’ against the driver’s side of a police vehicle on November 3 of last year.

The marked van with three police dogs was observed stopped in the middle of a crossroads in Whickham, close to Gateshead, with the engine running.

When the member of the public peered inside, she observed Kane with a bottle of white wine wedged between her legs.

Kane, from Belmont, County Durham, was on trial at Teesside Crown Court last week on charges of misconduct in public office, which she denied.

Friday, however, after less than an hour of deliberation, the jury found Kane guilty of the charge.

The 38-year-old Northumbria Police officer Helen Kane (pictured) was discovered’slumped’ against the driver’s side of the police vehicle by a dog walker on November 3 of last year.

The two-day trial heard that Kane was on duty when a dog walker spotted a police van stopped in the center of a daytime intersection.

Due to the ‘strange’ occurrence, the dog-walker peered inside and observed Kane’slumped’ against the driver’s side seat belt.

Robin Turton, the prosecutor, stated, ‘After repeated bangs [on the window], the female police officer lifted her head, rolled down the window, and engaged in a lengthy dialogue.

When she was told she was parked in the center of the road, she responded, “Am I?”

Between her legs was a bottle of dark wine. When the member of the public determined that the officer was okay, she went away, but not before taking a snapshot of the police vehicle and dialing 999.

Kane, from Belmont, County Durham, was on trial at Teesside Crown Court last week on charges of misconduct in public office, which she denied. However, on Friday (seen in court) after less than an hour of deliberation, a jury convicted Kane guilty of the crime.

Kane testified on the final day of the trial, telling the jury she was experiencing “personal and professional” challenges at the time and admitting she had been intoxicated on duty. Crown Court of Teesside is seen.

Later, at the Southwick Police Station in Sunderland, Kane was given a breath test and registered 117 micrograms of alcohol per 100 milliliters of breath, exceeding the legal limit of 35 micrograms.

Kane testified on the final day of the trial, telling the jury she was experiencing “personal and professional” difficulties at the time and admitting she had been drunk on duty.

She told the jury that her professional difficulties stemmed from a protest in the city center of Newcastle in which a citizen was bitten by a police dog.

She stated, “My police dog was mistakenly identified as that animal.” As a result, Northumbria Police informed me that I was at risk.

Kane stated that due to other issues in her personal life, she sought medical attention for her anxiety and stress and was prescribed antidepressants. She stated that she disliked taking time off from work and “used alcohol to cope.”

The jury was informed that Kane had been previously convicted of driving under the influence of alcohol in relation to the same incident, which she admitted. She had no additional convictions or warnings.

The sentencing date for Kane has yet to be determined, but it is believed to be in December.