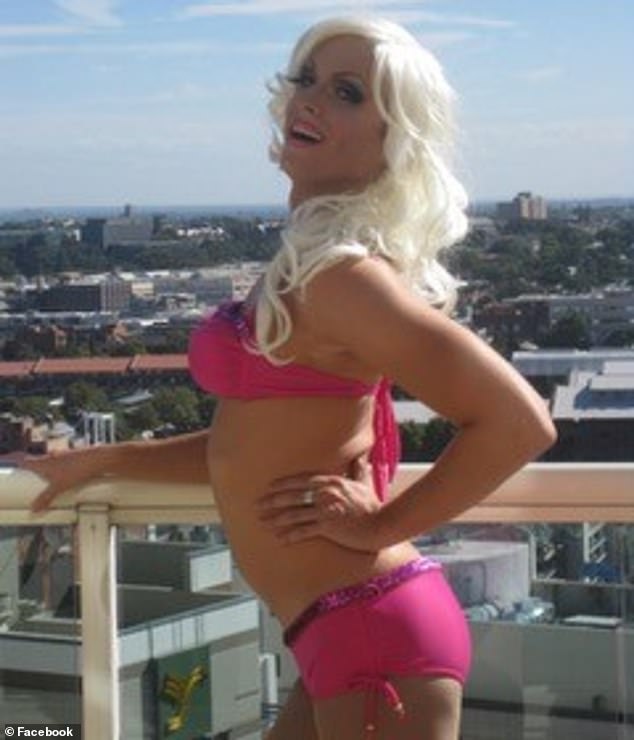 Outspoken Liberal candidate Katherine Deves – who said half of all males with transgender identities are sex offenders – has a gay brother who partied in a hot pink bikini and a blonde wig.

Daily Mail Australia can reveal pictures of Jonathan Deves, 41, dressing up in drag for Sydney’s Mardi Gras in 2010, camping it up at parties before and after the parade.

Her own brother’s cross-dressing episode appears at odds with Ms Deves’ regular online attacks on the transgender and queer movements – the candidate once tweeted that the Gay Pride flag ‘triggered’ her.

Now close friends say her emphatic views on transgender issues has caused a divide between the brother and sister, with one insisting: ‘He does not share her views. He is not transphobic.’

The controversy over Ms Deves’s views – discovered in old social media posts – has prompted some Liberals to call for her to be dis-endorsed as a candidate for ex-PM Tony Abbott’s former seat of Warringah on Sydney’s Northern Beaches.

However she has also attracted strong support from the conservative wing of the party, plus former PMs John Howard and Mr Abbott, as well as Prime Minister Scott Morrison himself.

The recently qualified lawyer was handpicked by Mr Morrison to fight to regain the beachside seat for the Liberals after it was won by independent Zali Steggall in 2019.

Her resurfaced tweets – posted right up until she was named a Liberal candidate in April – called for a ban on the participation of transgender competitors in women’s sport and more broadly criticised some trans activists and supporters.

She claimed half of all men with trans identities were sex offenders, and that what she called ‘transvestism’ was common among ‘sexual predators and even serial killers’.

Ms Deves said the Gay Pride flag ‘triggered’ her and said speaking out about the issue was akin to being part of the French Resistance that opposed German occupation during WWII.

Daily Mail Australia tried to approach Ms Deves, but she ducked questions in an ugly confrontation which saw a bodyguard drive his ute in the direction of waiting press and the police called.

When the Mail attempted to ask a question about Ms Deves’ brother in drag to her partner, David Morgan, he told Daily Mail Australia: ‘I’d rather look at that dog s*** there.’

Mr Deves was a central figure among a group of gay friends in Sydney around a decade ago, and now lives in the US where he works at a New York advertising agency.

Friends in Australia remember him as a strong supporter of gay and trans rights in the LGBTQI community.

‘He does not share her views,’ one close mate from the time told Daily Mail Australia.

‘He is not transphobic. Jonathan is a very kind person across the trans and queer community.

‘Transphobia doesn’t have a place in the politics or values of any country.’

Mr Deves refused to comment when approached by the Daily Mail outside his townhouse in Chelsea, New York.

Dressed in jogging shorts and wearing a black mask, he ran off when a reporter approached, ignoring questions about his sister’s controversial comments and his own background.

A male friend in the building told Daily Mail Australia that he and Mr Deves were both aware of his sister’s comments on transgender people, and ‘disapproved’ of them.

Mr Deves and his sister lived together in a home on Sydney’s lower north shore – owned by their wealthy Central Coast-based parents – when he returned to Australia from overseas in 2008.

He was part of a large group of friends who made no secret of their sexuality and embraced Sydney’s gay scene, with Ms Deves occasionally seen out with them.

She has recently spoken about she went to Mardi Gras but insisted that was when it ‘was still a grassroots street parade with a killer party celebrating the progress of gay and lesbian rights.’

In a podcast ‘Calmversations’, Deves revealed she started taking an interest in gender identity and women’s sports in 2015, but didn’t reveal why.

Her brother’s long-term relationship ended in January 2015 and eventually leading him to move to New York in 2017.

‘I guess you could call me a restless person.’ he revealed in an online article in 2019. ‘I’ve moved around a lot in my life.

‘Then in 2008, I went back to Australia and fell in love. It was a very happy time but the relationship ended, leading to a lot of heartbreak and confusion.

‘I remember calling my sister and asking ‘Where do I go?’ I started crying and that was the first time I had cried in front of anyone after the break-up.’

Ms Deves last week insisted to 2GB’s Ben Fordham that she was not transphobic or anti-trans, but has apologised for her comments and the way she phrased them.

‘I believe this is very much an issue of equality and fairness and I have received messages of support from all over Australia,’ she told him.

‘Australians are very much on side with my position. All I ever wanted was for this debate to be held in the public domain.

‘This argument is about women and girls.’

Ms Deves did not respond to requests for comment from Daily Mail Australia, and used a bodyguard to dodge questions at her three-bedroom home on Sydney’s Northern Beaches.

Last week she said her partner and children had been forced to leave the city after she received threats, although they were all at the family home on Tuesday.

Ms Deves faces an uphill battle to reclaim Warringah for the Liberals, with the former blue-ribbon seat held by Ms Steggall with a margin of more than seven per cent.

Ms Steggall is $1.05 favourite to retain the seat while Ms Deves is at $8.50, according to the most recent Sportsbet odds.

Ms Deves’ campaign is marked by an almost total lack of signs, posters, billboards or corflutes in support of the candidate in the constituency, amid claims local Liberal activists had refused to back her.

The electoral seat stretches from Dee Why and Manly on the coast to Cremorne and Neutral Bay on the lower north shore, but the only support seen was two posters in an abandoned pizza shop in Mosman.

Ms Deves last week accepted an offer to visit the Sydney Jewish Museum following the comments she made likening support for transgender movement to acquiescence of the German public to the Holocaust.