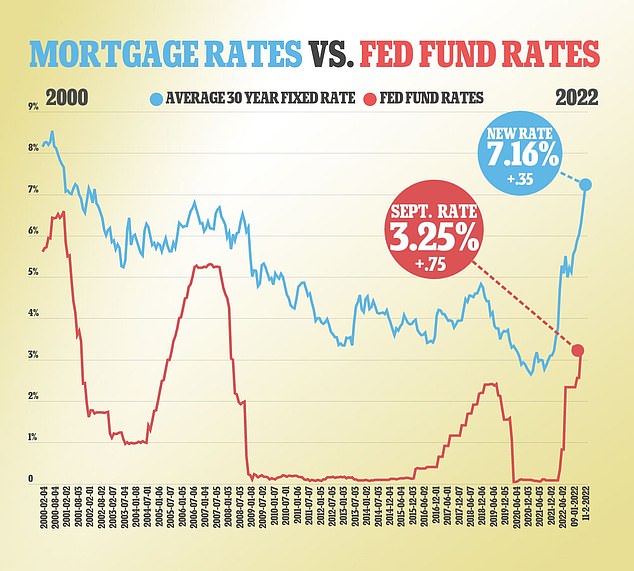 In order to combat excessive inflation, the Federal Reserve is likely to increase interest rates by 0.75 percentage points on Wednesday, marking the fourth consecutive increase.

The central bank is anticipated to increase interest rates from 3.25 percent to 4 percent, a further bold move as the inflation rate, which reached a 41-year high during the summer, continues to soar at 8.2 percent.

Despite the possibility of a decline in inflation as a result of the rate hikes, the cost of borrowing for Americans is projected to increase, with mortgage rates reaching 7.16 percent last week, much above the rates prior to the 2008 financial crisis.

Experts and lawmakers are frightened by the central bank’s determination on rising interest rates, with Colorado Democratic Senator John Hickenlooper pushing the Fed to stop before the United States enters another recession.

On Wednesday, the Federal Reserve is likely to boost interest rates by 0.75 percentage points, bringing them to 4%. It is currently 3.25 percent (above) while mortgage rates surged to 7.16 percent last week, significantly above levels prior to the Great Recession of 2008.

After leaving rates close to zero throughout the height of the pandemic, the Federal Reserve has been aggressively hiking interest rates to combat inflation.

Core inflation, which includes volatile food and energy expenses, has reached its highest level in forty years. Inflation is persistently high at 8.2 percent.

The anticipated increase on Wednesday is intended as a’restrictive’ measure, meaning it will be used to impede the economic activity and borrowing that have caused inflation to skyrocket.

During the epidemic, the Fed reduced interest rates to near zero in an effort to aid businesses and provide Americans with access to affordable borrowing rates.

The Federal Reserve began boosting interest rates to unprecedented heights in March and reached 3.25 percent in under seven months.

Although Federal Reserve Chairman Jerome Powell signaled in July that the central bank would moderate the pace of interest rate hikes, the Fed enacted a 0.75 percent increase in August and another increase in September.

During the September meeting of the Federal Open Market Committee, the majority of officials predicted that the federal interest rate would reach 4.6% by the end of the year, implying at least a 0.6% increase by December.

The Federal Reserve asserts that the economy can withstand the rate increases, citing a robust labor market with a low unemployment rate and an influx of job postings.

September’s unemployment rate of 3.5 percent was matched for the lowest since late 1969.

However, experts caution that the increasing interest rates will do more than simply cool the economy.

Diane Swonk, chief economist at KPMG, told the Wall Street Journal, “You’re trying to calm down an economy, not plunge it into a deep freeze.”

They must consider calibration throughout this conference.

Democratic Sen. John Hickenlooper cautioned the Federal Reserve to postpone its interest rate hikes in the face of persistently rising inflation rates in order to avert an impending recession.

Sen. Hickenlooper warned that the US economy was on the verge of a recession and urged the Fed to halt its planned rate hikes.

A further rate hike by the Federal Reserve could trigger a recession. Let’s wait and see what happens before hitting the economy again,’ the senator from Colorado tweeted, attaching a letter he had sent to Fed chief Jerome Powell.

Hickenlooper argued that continuing to raise interest rates when prices’might’ decline would be “foolish and harmful.”

In his letter, Hickenlooper stated, “High inflation needs a reaction.” However, there is concern that the Fed is acting too aggressively.

The Fed’s confidence to proceed with rate hikes has been bolstered by indications of robust employment growth.

Hickenlooper’s statements echo those of Senator Elizabeth Warren, who voiced concern in August that the Federal Reserve would throw the country into recession.

“What is worse than high prices and a robust economy?” It is exorbitant pricing and millions of unemployed people.’

»Fed to boost rates 0.75 percentage points to 4% for fourth time in a row«