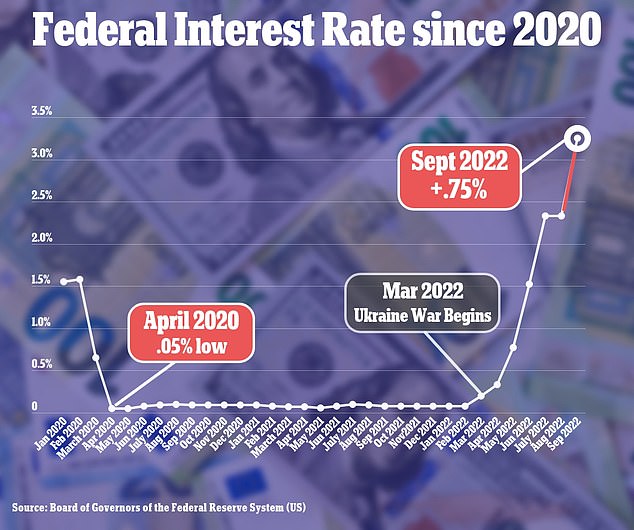 For the fourth time in a row, the Federal Reserve will increase interest rates by 0.75 percentage points on Wednesday to battle the inflation crisis.

The central bank is anticipated to increase interest rates from 3.25 percent to 4 percent, a more aggressive move given that the summer’s 41-year high in inflation rates still stands at 8.2 percent.

The cost of borrowing for Americans is anticipated to rise despite the possibility that the increases may reduce inflation. Mortgage rates this week reached 7.16 percent, which is much higher than they were before the 2008 financial crisis.

Experts and legislators are concerned about the central bank’s determination on rising interest rates; Colorado Democratic Sen. John Hickenlooper has called on the Fed to halt before the US enters a new recession.

The anticipated rate increase on Wednesday is intended to be “restrictive,” that is, it will be used to forcibly limit the borrowing and economic activity that have caused inflation to skyrocket.

The Fed cut interest rates during the epidemic in order to support companies and provide Americans access to inexpensive borrowing costs.

However, starting in March, the Federal Reserve started raising rates to record highs, which took them only seven months to reach 3.25 percent.

Despite Fed Chair Jerome Powell’s declaration in July that the bank would limit rate increases, a second 0.75 increase was imposed same month, followed by another in September.

The majority of officials at the Federal Open Market Committee meeting in September predicted that the federal interest rate will increase by at least another 0.6 percent by December to 4.6 percent by the end of the year.

While highlighting a robust labor market with a low unemployment rate and an increase in job opportunities, the Federal Reserve asserts that the economy can withstand the increases.

The unemployment rate dropped to 3.5 percent in September, which is one of the lowest levels seen since late 1969.

But experts caution that the higher borrowing rates won’t only slow down the economy.

According to Diane Swonk, chief economist at KPMG, “you’re attempting to calm down an economy, not send it into a deep freeze.”

“They have to keep calibration in mind during this conference,”

‘Another rate hike by the @FederalReserve may trigger a downturn. The Colorado senator tweeted, attaching a letter he had sent to chair Jerome Powell, “Let’s wait and observe what’s occurring before hitting the economy again.”

Hickenlooper said that it would be “foolish and destructive” to keep raising rates when prices “may” decrease.

High inflation demands a reaction, according to Hickenlooper’s letter. But the Fed is acting prematurely and in excess, which raises concerns.

While inflation is still high and eroding consumer buying power, the Fed’s policies have caused the cost of living to rise even more. The costs of the aforementioned products and services have increased, while other prices have not decreased as a result of the Fed’s policies.

Sen. Elizabeth Warren voiced her worry that the Fed might cause the economy to enter a recession back in August, and Hickenlooper’s calls reflect her prior worries.

“There is nothing in raising interest rates, nothing in Jerome Powell’s toolkit that deals directly with those,” Warren told CNN’s Dana Bash. “The causes of inflation, things like the fact that COVID is still shutting down parts of the economy around the world, that we still have supply chain kinks, that we still have a war going on in Ukraine that drives up the cost of energy, and that we still have these giant corporations that are engaging in price gouging.”

What is even worse than high prices and a robust economy? There are millions of individuals without jobs and excessive costs.

»Fed anticipates to boost rates 0.75 points to 4% for fourth time«