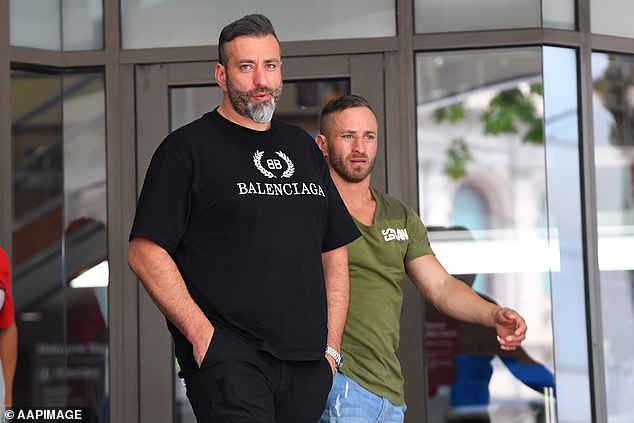 Fears that Melbourne is on the tip of a full scale gangland war have reached boiling point after another execution-style murder on the streets.

Korey Kesici, 22, was ‘prepared for violence’ when he was shot multiple times in the early hours of Thursday in what police believe was an organised assassination.

Now it has emerged police are investigating if Melbourne crime kingpin George Marrogi is linked to the brazen hit.

Marrogi was as sentenced in the Supreme Court of Victoria to a total of 32 years in jail – all of which he is likely to serve behind bars – on April 29 over the public execution of drug dealer Kadir Ors in 2016.

On Friday, the Herald Sun reported Marrogi was under investigation over Kesici’s murder despite being locked within Victoria’s maximum security Barwon Prison.

The ruthless killer has allegedly been busy maintaining control of his gang – Notorious Crime Family – from behind bars.

It read: ‘Take delight in the lord and he will give you the desires of your heart.’

The passage was accompanied with the ’11:11′ tag – the calling card of the NCF.

The shooting comes amid a surge in underworld activity not seen in Melbourne for up to a decade.

I mean they’re not going to go and get jobs at Bunnings, are they.

It was almost 11 years ago to the day when Macchour Chaouk was shot dead at his home in Melbourne’s west.

The execution of the Chaouk crime patriarch came amid a wave of gangland violence between his family and the rival Haddara clan.

It had begun in 2009 when Ali Chaouk shot dead Mohammed Haddara in a suburban street in Altona North.

Haddara, 28, was shot five times as he tried to run away from the assassin, who killed him in a dispute over a car lent for a wedding.

The war between the Lebanese crime gangs would last for years and spread fear across Melbourne’s western suburbs.

Public shootings saw members of both clans jailed as police worked to crush the bloody war.

The feud would run out of steam with the jailing of Fadi Haddara in 2015 on drug charges.

While that period was a tough slog for Victoria Police, it had been a blip on the radar compared to the carnage of the city’s notorious ‘Underbelly War’.

Between January 1998 and August 2010 36 Melbourne underworld figures were murdered.

Last month, Victoria Police Commissioner Shane Patton went on radio to play down  suggestions Melbourne was on the cusp of another gangland war.

It came following a string of high profile gang arrests and the day national president of the Comancheros, Mick Murray, was charged over the 2019 murder of Mitat Rasimi.

A close associate of former drug lord and Underbelly War survivor Tony Mokbel, Rasimi had been shot dead while in his car in Dandenong on March 3, 2019.

‘I don’t believe, at all, that we’re on the cusp of any significant gangland war or anything like that, but it does show we constantly have these criminal entities, these criminal groups that are prepared to do anything to try and make money,’ Commissioner Patton told 3AW.

‘We constantly will be targeting them, we’ll constantly be disrupting them.

‘We can’t afford to take our eyes off the ball.’

Despite the assurances, an underworld insider told Daily Mail Australia Melbourne was experiencing arguably ‘the most unstable period since the gangland war on numerous fronts’.

‘The emergence of Marrogis NCF and his prison bust on conspiracy charges has all sorts of implications. There is lot of money at stake, a lot of drugs, huge money,’ he said.

Marrogi has been investigated over multiple fatal and non-fatal shootings over the periods he has not been behind bars.

Last week it was revealed he had done little to reform his passion for crime while awaiting his latest sentence.

Well connected to Middle Eastern organised crime syndicates, Marrogi has been able to recruit prisoners and other members to NCF from inside Barwon’s top-security Acacia Unit.

Police allege Marrogi was allegedly setting up drug deals from Barwon Prison while pretending to be on the phone with his lawyer, the Herald Sun reported.

They also believe he was conspiring to murder a ‘close associate’ as the investigation into his alleged running of the drug empire from inside jail netted two more arrests.

The bust coincided with word Jesse Marrogi  – his own brother – had left the country.

When not dealing with Middle Eastern crime gangs, detectives are busy working to get a grip on the city’s escalating outlaw motorcycle gang problems.

Bikie enforcers Mark Balsillie, Sam ‘The Punisher’ Abdulrahim and Jason Addison left along with him.

Mitchell, Balsillie and Abdulrahim have been three of the gang’s most powerful members in recent years.

‘Who knows how that’s all going to end up. It’s one of the biggest bikie splits in history,’ the insider told Daily Mail Australia.

‘And with the Mick Murray arrest, where does it leave the Comancheros?’