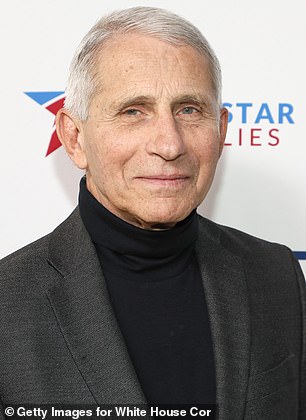 Dr Anthony Fauci has criticized the decision to hold last week’s maskless White House Correspondents’ Dinner fearing that Americans might take it as a sure sign the pandemic is over and Covid no longer a serious threat.

The nation’s top infectious disease doctor shared his frustrations on a phone call with public health experts earlier this week saying he was ‘miffed’ stressing he was worried that people were losing sight of protecting those who are still most vulnerable when it comes to Covid.

Fauci then used the WHCA dinner, which was attended by President Joe Biden, as a prime example.

Thousands of guests including dozens of other administration officials all attended the event which was held at the Washington Hilton ballroom.

Yet just hours earlier, Fauci was spotted cozying up to CNN host Don Lennon at a White House Correspondents’ Dinner pre-party without a mask in sight.

‘Fauci bailed on attending the White House Correspondents’ Dinner because of ‘individual assessment of my personal risk.’ …..so he just went to the [crowded] pre-parties #WHCD,’ Former Donald Trump political advisor Sean Spice captioned the photo.

Fauci’s attendance at the indoor-outdoor pre-party took many by surprise after the 81-year-old had informed ABC News, the news organization that invited him to the WHCD, he would not attend the 2,600-people event due to his own assessment of personal risk.

During the off-the-record call, which was heard by at least four other people, and reported to Politico, Fauci wondered aloud why so many felt comfortable gathering maskless indoors as a fresh surge in Covid cases continues to surge.

Fauci who did not attend the main dinner out of concern for his own health, did not criticize Biden or the other officials directly, but rather the points were made during his appeal for health experts to emphasize that the fight to control the pandemic fight is still continuing.

But Fauci’s assessment stands in direct contrast to the far more relaxed approach held by White House and Covid-19 Response Coordinator Ashish Jha who was both at the dinner and on Fauci’s phone call.

Jha made no comment in response to Fauci’s remarks.