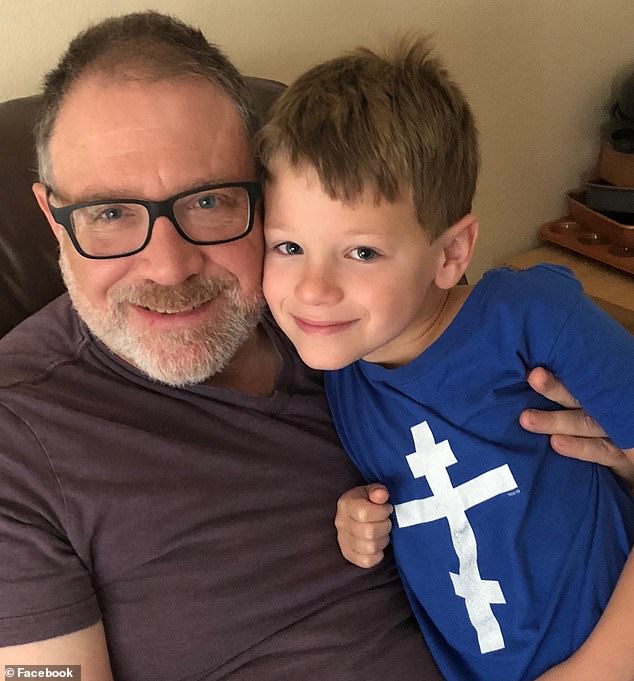 After moving to California from Texas, where chemical castration is permitted, a desperate father has pleaded with his wife not to chemically castrate his son.

Jeff Younger of Texas revealed on Tucker Carlson Tonight a video of his nine-year-old son, James, claiming to be a female.

In the video, when questioned whether he was a male, James said, “No, I’m a girl.”

The little boy said that his paediatrician mother informed him he was female because he ‘loved girls’ and would wear ‘dresses.’

Younger said that his ex-wife, Dr. Anne Georgulas, intended to chemically castrate their son by his present age of nine. According to the Cleveland Clinic, chemical castration may be accomplished using injections, implants, or oral medication to suppress the production of sexual hormones.

‘My blood ran cold when I realized what she had planned for that boy,’ Younger told Carlson.

‘She started transitioning him when he was two. She tried to enroll him in a gender clinic when he was five – the Genesis Clinic in Dallas, Texas. Pediatrician records show that she intended to chemically castrate him at age eight or nine, his current age.

‘And then he magically moves to California? I don’t think this is an accident.’

He said his ex-wife divorced him so she could castrate the boy without his permission and even got a temporary court order that forbade Younger from ‘even telling my son that he was a boy,’ he said on the show.

‘I had to present him to the world as a girl,’ he said. ‘His twin brother [Jude] got completely confused by all this.’

In 2019, Younger was granted 50/50 rights to his children to help block his wife’s advancements toward the medical procedure, but the case was eventually transferred and Judge Mary Brown stripped the father of his rights, he claimed.

‘Eventually, [she] allowed my ex to move to California just a few days before the sanctuary law in California went into effect.’

California’s sanctuary law protects transgender children and their families who flee from ‘Alabama, Texas, Idaho or any other state criminalizing the parents of trans kids for allowing them to receive gender-affirming care.’

‘If these parents and their kids come to California, the legislation will help protect them from having their kids taken away from them or from being criminally prosecuted for supporting their trans kids’ access to healthcare,’ State Senator Scott Weiner said in a statement.

The sanctuary law went into effect on January 1, 2023.

The father took his case all the way up to the Texas Supreme Court in an attempt to block his wife, but in an 8-1 decision, they ‘absurdly’ rejected his petition, saying she was ‘no more likely to transition my son in California under the sanctuary laws than she would in Texas.’

The 9 states where chemical castration is legal

Texas also permits chemical castration, but it lacks a sanctuary statute that would prevent other states from blocking the transfer.

Younger further alleged that James’ school system “tried to secretly transition” him and pressured his father to dress him in feminine attire.

The father of two said on Carlson’s show, “I’d bring my son to school in boy’s clothes and they’d give him a dress and make him use the girls’ restroom.”

Younger claims that Georgulas enrolled the boy as a female at school.

In October of 2019, Georgulas won a court challenge that granted her permission to provide James hormone treatment to prevent puberty.

Georgulas, a doctor, maintained for a long time that James is transgender and wanted her son to transition to Luna.

However, her ex-husband did not accept that James had gender dysphoria and instead believed that his son was just suffering gender confusion.

He accused Georgulas of forcibly socially transitioning James into a female by forcing the boy to wear dresses. She claimed, however, that three mental health doctors had diagnosed James with gender dysphoria and that therapists had suggested they begin using the name Luna instead of James.

Georgulas and Younger were Orthodox Church members at the time of their 2010 wedding.

Before the 2012 birth of their twins, they asked that their gender be male via IVF.

However, disagreements regarding their child’s gender arose when Georgulas brought James to a gender therapist at the Children’s Hospital Center.

The therapist suggested that James begin his social shift by wearing dresses to school and adopting the name Luna.

Younger asserts that his ex-wife has been pressing the shift since their divorce and has accused Georgulas of beginning to brainwash their kid when James was just three years old, accusing her of shutting their son in his bedroom and telling him that “monsters only eat boys.”