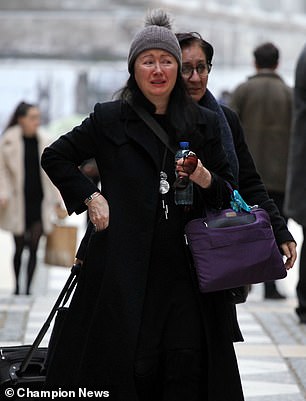 After being brought into court for ‘baring his fangs and snarling’ at a high-flying couple who refused to return his son’s ball when it fell over their fence during a neighbours’ dispute, an angry parent risks costly damages and legal fees.

In May of 2018, Chaim Adler rushed into the backyard of his parents’ next-door neighbors, attorney Warren Bergson and his psychologist wife Dr Edel McAndrew-Bergson, after they stole his son’s football.

The’mature’ couple in Golders Green, north London, was reportedly annoyed by the loudness of the ball being repeatedly’smashed’ against their fence.

The court was informed that Mr. Bergson seized the ball when it rolled into their garden in May 2018 in order to get calm.

Dr. Edel McAndrew-Bergson (left), Esther and Zavy Adler, and their son Chaim stand in front of the Mayor and City County Court

But Mr. Adler stormed into the couple’s garden, enraged that his kid was in tears.

He insulted and threatened Mr. Bergson while dancing on one foot and used “aggressive body language,” causing him and his wife to dread an assault.

This includes knocking on their door and forcing his face against their window while ‘baring his teeth and snarling’ at them.

Zavy and Esther Adler had lived in their home for 40 years, bringing up their children there, the court heard – pictured Esther and Zavy Adler and their son Chaim

Now, after being sued for harassment by the Bergsons, the 34-year-old CEO of a fire alarm firm, Mr. Adler, risks paying damages and a possibly enormous legal expense.

Judge Stephen Hellman KC of the Mayors and City Court determined that although Mr. Bergson should not have confiscated the ball, Chaim Adler had overreacted and harassed the newlyweds.

The parents of the irate father, Zavy, 72, and Esther Adler, 68, who own the big £1 million-plus home next door to the Bergsons’ then-apartment, may also have to make settlements as a result of the disagreement.

After the Bergsons moved in next door to Mr. Adler’s parents in 2017, the judge ruled that the court conflict was a “unhappy situation with an out-of-control neighbor quarrel.”

The court heard that Zavy and Esther Adler had lived in their house for forty years and raised their children there.

But problems arose after Mr. Bergson and Dr. McAndrew-Bergson, both 56, relocated to London and rented a one-bedroom garden flat adjacent to their previous residence.

The initial conflict occurred in August of 2017 when Dr. McAndrew-Bergson was hanging out his laundry and water suddenly began leaking onto his neighbor’s garden.

In their testimony, the pair stated that Mr. Bergson had confronted the neighbors, but that Zavy Adler had become enraged, charging at him and pursuing him back to his garden.

The senior Mr. Adler had been “ranting and raving” and “dancing around in a fury,” assaulting Dr. McAndrew-Bergson with an especially nasty Yiddish phrase.

Although Mr. Bergson and Zavy Adler eventually shook hands, the Bergsons alleged that the encounter marked the beginning of a “harassment campaign.”

They complained about the continual noise of construction, which also obstructed the entrance to their apartment, and the frequent loud family gatherings next door.

As a form of ‘intimidation,’ a football was ‘cracked’ repeatedly against the fence dividing the gardens every weekend, and they resorted to purchasing British Library subscriptions in order to have a tranquil place to attend.

In May 2018, the Bergsons said that the purported campaign against them culminated in two encounters with Chaim Adler over a long weekend.

The Adler children’s football was at the center of the dispute, as the Bergsons grew annoyed with its repeated kicking against the fence.

When Dr. McAndrew-patience Bergson’s ran out, she grabbed it when it entered her garden and threw it over another neighbor’s fence.

Mr. Bergson then decided to confiscate it, bringing it back to his apartment on the same weekend on another occasion.

The Bergsons stated that Chaim Adler became upset about the football dispute and twice entered their yard, one with a “small army” of Adler family members who had planned to use them as “evening entertainment.”

The first conflict occurred in August of 2017 when Dr. McAndrew-Bergson was drying his clothes and water suddenly began leaking onto his neighbor’s garden.

On the first time, he was’snarling’ and taunting Mr. Bergson; on the second, he allegedly attempted to force his way into their apartment while ‘aggressively’ demanding the ball back.

Dr. McAndrew-Bergson stated that they had locked the door on Chaim Adler, but Adler was enraged, hammering on the door, forcing his face against the window, “baring his fangs and snarling” at them.

In what the judge termed “haunting” testimony, she stated that her husband had also been besieged during the weekend, with Chaim Adler jeering at him and repeatedly kicking his right leg in the air.

Esther Adler went to the Bergsons at one time and told them they had no right to reside next door and should leave if they didn’t enjoy the noise, she claimed.

The apartment was located in the grounds of the house next door to the Adlers, which belonged to a member of the extended Adler family who had rented it to the Bergsons.

Chaim Adler denied any wrongdoing in the witness box, stating that he was only a father defending his kid, who had been yelled at and reduced to tears when he asked for his ball back.

He claimed to have engaged Mr. Bergson in a “back and forth” in the entryway of his apartment, but Mr. Bergson closed the door and did not return the ball.

Judge Hellman heard the case in March of this year, but did not provide a decision until last week due to the death of Mr. Bergson, who was ill and could not attend the hearing.

The court stated that conflict between the neighbors was always a possibility because they were such diverse individuals with varied life goals.

He stated, “The Adlers relished weekend family reunions and religious festivals, whereas the Bergsons were a mature couple who appreciated solitude and quiet.”

The fact that they lived next door to one another was always going to be a potential cause of conflict.

He noted Dr. McAndrew-‘distress’ Bergson’s over what transpired, Esther Adler’s ‘bitterness,’ and Chaim Adler’s ‘rage’ as evidence of the case’s negative impact on all those involved.

He stated that there was validity to both sides’ accounts of the paddling pool event, that Mr. Bergson ‘overreacted’ by yelling at and frightening the children, and that Zavy Adler ‘overreacted’ by following him next door.

He decided that the Bergsons’ depiction of Zavy Adler’s behavior was mostly correct, but because the episode was an isolated occurrence, it could not be termed harassment.

As a family residence, weekend noise in the Adlers’ yard was likewise totally typical and not part of a “harassment campaign.”

Even though the football may have been kicked loudly and frequently against the fence, he discovered no indication that the Adlers were informed that the Bergsons were annoyed by it.

However, he determined that the allegations against Chaim Adler following the occurrences that occurred during the May 2018 weekend were well-founded and that he had harassed them and entered their property.

He stated, “He was outraged because they had twice brought his eight-year-old kid to tears.”

The intensity of his fury was readily apparent during his testimony.

But, despite the fact that Mr. Bergson should have returned the ball when asked and that Dr. McAndrew-Bergson should not have tossed it over the other neighbor’s fence, his reaction was not warranted, he added.

Mr. Adler was enraged because his kid had shed tears during the football incident.

It was expected to generate fear and concern, and it did.

“I acknowledge that he was furious because they offended his son, but he has not demonstrated that his behavior was justified, and I am certain that it was not.”

He claimed that Mr. Adler had trespassed on the Bergsons’ property and led them to fear an assault by displaying “aggressive body language.”

The judge further determined that things left on the route leading to the garden flat by builders working on Mr. and Mrs. Adler’s property constituted an interference with the Bergsons’ right of way, as the workers must have been aware of the path’s condition.

The judge adjourned the case until a later date, at which point he will decide how much Dr. McAndrew-Bergson should receive in damages from Mr. and Mrs.

The judge will also decide who is responsible for paying the attorneys’ fees, which are likely to be substantial given that the trial lasted three days and another hearing is scheduled.

However, he advised the parties to attempt to settle the amount of damages and who will pay the case’s costs outside of court.

“It is unfortunate that things have reached this point,” he remarked.

‘It is possible that, at one second to midnight, the parties can overcome the remaining issues.

Everyone is highly encouraged to aspire to achieve that.