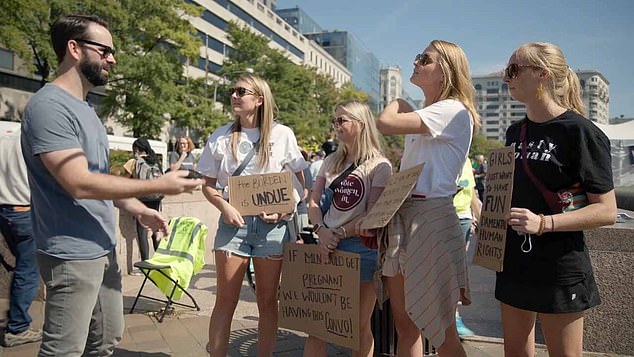 ‘What is a women? Can one person tell me what a woman is?’ Walsh asked protesters as he walked along the route with a megaphone at the Women’s March last year.

One protester yelled back, ‘If you’re not here for women, we ask you to leave!’ Others remained silent.

The protesters’ reactions are the center of a new Daily Wire documentary, ‘What is a Woman?’ that is set to be released on June 1. A book with the same title is set to be published on June 14.

The trailer was released Saturday – the day hundreds of thousands are expected to march in Washington, D.C. and across the country for a ‘Bans Off Our Bodies’ Day of Action for Abortion Rights rally.

The event, organized by Women’s March, comes after Politico published a leaked draft opinion that suggests the Supreme Court is set to overturn Roe v. Wade.

On Saturday, Walsh told Dailymail.com that while he won’t be making an appearance at the march today, he said his message will be clear in the form of billboards along the route.

‘We thought it would be important for the folks marching today to see this message,’ Walsh explained.

A billboard promoting the show has been set up along the route of the Washington DC march, along with another in New York City.

‘If you ask this question – what is a woman – they become uncomfortable and they simply cannot answer it,’ Walsh told Dailymail.com.

‘Some of these activists we’ve encountered become militant, vicious, when we ask this question,’ he said.

Walsh said asking the question is just the beginning, a ‘door to a broader topic of gender ideology’ and how it affects our children.

In the trailer for the documentary, Walsh speaks to pediatrician Dr. Michelle Forcier about the puberty blockers used to help teenagers transition to a different gender, which the doctor explains are completely reversible.

Walsh then asks her specifically about the drug Leuprolide acetate, also known as ‘Lupron’, which he points out is also used to ‘castrate sex offenders.’

In the trailer, Dr. Forcier then appears to shut down the interview.

The drug is also used to treat symptoms associated with advanced prostate cancer, to treat endometriosis and is used, along with other medications, to treat anemia.

I am not referring to an individual person as if she is two people,’ Walsh wrote in another tweet. ‘Everyone else can run around sounding like maniacs if they want but I will not be participating. No thank you.’

Walsh appeared on Tucker Carlson just minutes after being suspended.

‘I just found out five minutes ago, just before we went on the air, that I just got suspended on Twitter because I pointed out that biological males are men,’ Walsh said. And, this to me is all part of the game here. That this is what leftism is and if you criticize it then they’re gonna shut you down because they realize—it’s not like they can engage intellectually. It’s not like they can defend, intellectually, any of the examples that you just played.’