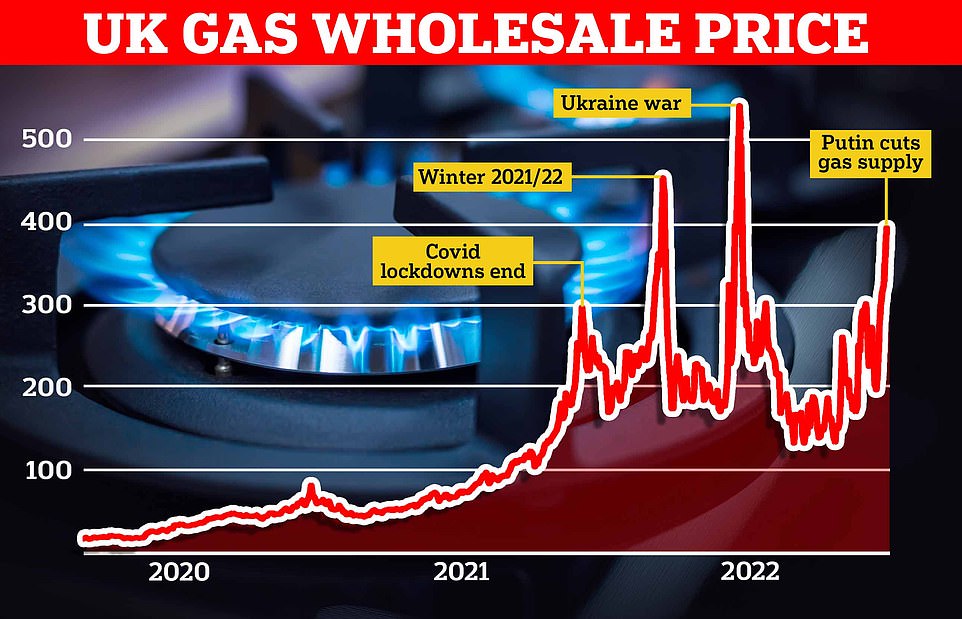 According to the bleakest projection yet for struggling families, the limit on energy bills might surpass £5,000 next year. Ministers are preparing to ‘bang heads together’ in an emergency Downing Street meeting of fat cat utility CEOs.

At yesterday’s energy costs, experts at energy consultancy Auxilione estimate regulator Ofgem to set the limit at £5,038 per year for the typical home in April.

It also estimated that costs would hit £4,467 in January, £200 more than Cornwall Insight’s already bleak projection.

As families consume more gas in the winter, this projection may scare energy customers more than April’s higher amount.

A typical home would spend £571 on energy in January under the worst scenario.

Rishi Sunak and Liz Truss face questions about how they will aid struggling families. Labour has urged for a ‘loophole’ in the oil and gas windfall tax to be plugged to obtain extra support monies.

Martin Lewis called growing energy costs a ‘catastrophic’ financial disaster that endanger lives. Before today’s meeting, the Chancellor told reporters, ‘I believe it’s crucial we all come round the table. I will continue to do my job as Chancellor, but I also want to push them: are you investing?’

How can you assist clients? Can we do more? The meeting’s purpose.

Yesterday in Belfast, he said, ‘I want to understand further how they’re dedicated to that gas investment, because whatever happens we need energy security and Kwasi and I will continue to press hard.’

If you look at renewable energy producers, their pay is connected to gas prices.

So, they haven’t altered anything, and their input costs haven’t gone up, but they’re making more money because to Putin’s high gas prices.

James Cleverly said, ‘The Chancellor and the Business Secretary are summoning in the chiefs of those large energy corporations to pound some heads together and make them accountable about what they’ll do with those earnings.’

He told the BBC it would be his’moral obligation’ to assist seniors and others on welfare with bills if he became prime minister.

Ms Truss seemed to shy away from her former stance of no more ‘handouts’, telling GB News she would ‘do all I can to help working families’ if chosen prime minister.

The Foreign Secretary said she will move ‘as quickly as feasible’ with an emergency fund to support people through a harsh winter.

When asked whether she would remove VAT off energy bills to save households £210, she answered, ‘There will be an urgent budget to deal with the difficulties we confront.’ These considerations must be considered.

Miss Truss wouldn’t say how much help she’d provide, but she promised to decrease taxes to enable people retain more of their money.

Labour wants the government to fix a ‘loophole’ in the energy earnings windfall tax to assist families pay their bills.

Rachel Reeves, the shadow chancellor, claimed the Tories are giving oil and gas companies billions in tax benefits to pass on to shareholders. The government should be embarrassed of this loophole.

This isn’t right when individuals are anxious about paying expenses.

Mr Brown told the Guardian that the government should ‘halt any future bill ceiling increases’ and negotiate lower rates with each firm after evaluating their financial statements.

He said Britain should lead an emergency G20 summit to address the problem.

Mr Brown has urged on the Tory leadership candidates to collaborate on an emergency plan with Boris Johnson. A chief at one of the UK’s leading energy businesses has joined his requests.

Philippe Commaret, EDF’s general director of consumers, said, ‘We’re urging the government and the two Conservative candidates to collaborate with industry to help people in need this winter.’

Customers must know assistance is coming. Delaying a decision would generate concern for millions of people.’

Martin Lewis, a consumer advocate, told broadcasters: ‘I agree that Boris Johnson is running a zombie administration and can’t do much, but the two contenders – one of them will be our prime minister – need to tell us the very minimum of what they would do.’

Liz Truss yesterday in Bedford, Greater Manchester. She and Rishi Sunak are under pressure to cut energy costs.

A government official stated, ‘We’re working with the electrical industry to promote changes and improve the market’

As declared in May, the government continues to analyze the unusual profits in specific sections of the power production industry and the relevant and proportional actions to take.

Yesterday, consumer advocate Mr Lewis claimed the cost of living issue was turning into a ‘national disaster’ and accused governments of behaving like ‘zombies’

Millions of homes won’t be able to pay this devastating increase.

‘We’re confronting a financial emergency that threatens lives,’ he warned.

I agree that Boris Johnson is leading a zombie government and can’t accomplish much, but the two contenders need to tell us the very minimum of what they would do.

If they can’t agree, we need correct plans because millions of people are terrified.

Uswitch found that families are already in debt to energy providers before the price ceiling is abolished.