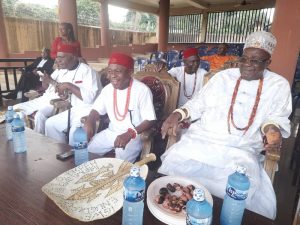 The event, held in Obu Umunri Enugwu-ukwu, with villagers and friends in attendance, was organised to enable members of the community display their farm produce for the farming year and get support.

Declaring the event open, the Traditional ruler of Enugwu-Ukwu, Igwe Raph Ekpeh, praised the farmers for their hard work and dedication to producing food, and encouraged them to do more to sustain the drive for food sufficiency.

He also presented a motorcycle to the farmer with the highest seed harvest.

A farmer, Nze Joe Anaelom, said farm work has been helpful to his family, and thanked Igwe Ekpeh for the opportunity given to farmers in the community.

Other farmers, Mr. Obioma Amalaha and Mrs Beatrice Nwuzor, appreciated the Traditional Ruler of Enugwu-ukwu for his support.

Correspondent, Amarachukwu Okafor, reports that in the past seven years, the community has also used the agric exhibition to herald new yam festival of the community called “Olili Onwa Asato”, which is performed first by the Traditional Ruler of the community before other members of the could join.