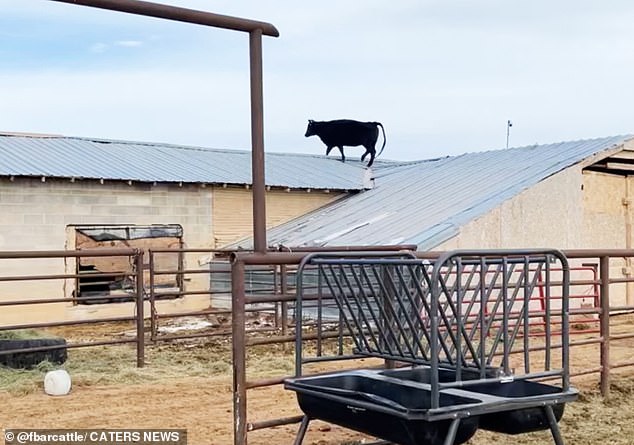 A farmer has released hysterical video of a cheeky cow that climbed onto the top of a barn.

Brady Farnsworth discovered the misbehaving cow on the top of his father-in-law’s Utah farm and wanted to share the amusing picture with everyone.

The 26-year-old farmer from Altamont said that he had seen cows performing all sorts of bizarre things, but never a cow on a roof.

The cow can be seen trotting around the roof before gazing at the camera and trying to walk down the other side in the footage.

The farmer can be heard yelling “Where the f*** is she going?” as the cow trots along the other side.

He next demonstrates where the mischievous cow leapt onto the roof, then strolling through the barn to the other side to demonstrate where she descended.

He then directs the camera to the snow-covered barn roof, which is covered with hoof prints.

Mr. Farnsworth then pans the camera to a herd of cows and zooms in on him as they all gaze in his direction.

He added: ‘I took the videos because I have not seen a cow on a roof and wanted to show everybody.

‘It was something you don’t see every day so I wanted to capture the moment.

‘The cow is a six-year-old Sim-Angus. She did not have a name but since she is becoming famous I will have to find a suitable name for her.

‘People have said all kinds of things about the video. Most of them want to know how it happened and say how funny it is.’