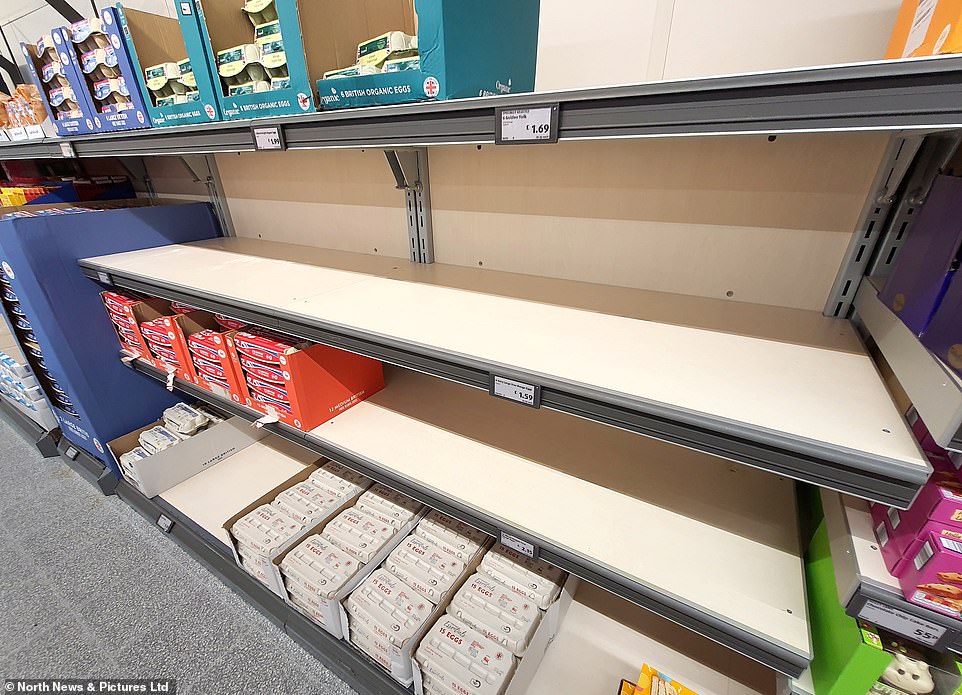 Today, supermarkets were accused of contributing to the disruption in the egg supply chain by refusing to pay farmers a “fair price” to produce eggs.

In a series of videos, the Instagram-famous Welsh egg farmer Ioan Humphreys raged against supermarkets, blaming them for much of the sector’s disruption.

Photographs of empty shelves at supermarkets across the United Kingdom, including Tesco, Lidl, and Aldi, reveal the magnitude of the crisis overtaking the sector as millions of birds are slaughtered or placed under house-arrest to prevent the spread of the country’s worst-ever bird flu outbreak.

Asda and Sainsbury’s have now instituted rationing in an apparent effort to prevent panic shopping due to concerns that supplies could run out before Christmas.

Have YOU observed a dearth of eggs in stores and on menus?

Wetherspoons has provided breakfast alternatives due to egg shortages, while a prominent bakery in Norwich that relies on eggs described the supply chain interruption as “catastrophic.”

Although he acknowledged that the spread of avian flu had exacerbated the situation, Mr. Humphreys stated that the majority of the disruption was due to the refusal of supermarkets to pay more for eggs from British farmers experiencing a significant rise in the cost of production due to factors such as the Ukraine War.

The outspoken farmer said to MailOnline, ‘It’s not because we don’t want to produce eggs; it’s because we can’t afford to produce eggs. Simply a reasonable price to pay our costs so we can continue producing British eggs.’

The Old Catton-based owner of The Baking Addict, Kaysie Davidson, told local media: ‘In order to keep my costs the same, I’m using cheaper ingredients, which happily hasn’t affected the flavor. Everything is becoming increasingly costly.

And Steve Magnall, co-owner of Two Magpies Bakery in Timberhill, adding, ‘Energy is our worst rising expense; it will cost us over £200,000 this year. The price of dairy has nearly doubled, and the price of flour has increased by 25 percent…. This year, we anticipate being completely wiped out and, at best, breaking even. We cannot always pass on the costs to the consumer.

The British Egg Industry Council stated that it is unaware of any egg shortages, but noted that supply and demand might fluctuate and that availability is currently tight.

Some egg department shelves at the Aldi in North Shields, North Tyneside, are empty today.

Welsh egg farmer Ioan Humphreys slammed supermarkets in a series of social media videos, blaming them for most of the turmoil in the industry.

Andrew Opie, director of food and sustainability at the British Retail Consortium, stated, ‘Retailers have long-standing, established connections with their suppliers, and they understand how essential it is to retain these partnerships for the sake of their customers and businesses. During a cost-of-living crisis, supermarkets are limited in how much additional cost they can pass on to consumers, while sourcing the majority of their food from the United Kingdom and knowing they must pay a fair price to egg farmers.

He continued, “While avian flu has impacted the supply of some egg varieties, merchants are masters at managing supply chains and are working diligently to minimize customer harm.”

To assure availability for everyone, some businesses have imposed temporary limits on the quantity of boxes that can be purchased.

There is no “immediate threat” to the food supply chain, including eggs, according to Defra. MailOnline has sought more feedback from Tesco, Sainsbury’s, Asda, Lidl, Aldi, Morrisons, Iceland, Waitrose, and the Co-op.

Asda said that it has been impacted by the disruption, and even Waitrose, which is owned by John Lewis and boasts a robust egg supply, is monitoring the issue. Signs have also been observed in Sainsbury’s and Lidl locations in Wales and Wokingham, respectively, asking consumers not to purchase excessive quantities of cartons for fear of causing extra turmoil.

Yesterday, a snapshot of empty egg shelves at a Sainsbury’s was published on Twitter.

YESTERDAY, a notice in a Lidl in Wokingham urged customers to restrict eggs to avoid the store from running out.

LAST WEEK, the Sainsbury’s in Dorking, Surrey, ran out of eggs.

PRIOR WEEK: “We are currently having supply challenges with our fresh egg selection,” a sign at Sainsbury’s in Dorking informed customers.

The sale of eggs has been restricted to two per client at an Asda supermarket in Cardiff, with one woman taking a photo of a sign at her neighboring Coryton branch claiming the restriction was due to “poor availability.”

Helen Watts, from the wholesale supplier Freshfields Farm Eggs in Cheshire, stated that avian flu had impacted supplies as a large number of birds had to be culled and that the situation was “gradually deteriorating.”

In the 12 months leading up to the end of September, food inflation reached 14.6%, which contributed to the shortages.

Have YOU observed a shortage of eggs in stores and restaurants? Email jack.wright@mailonline.co.uk