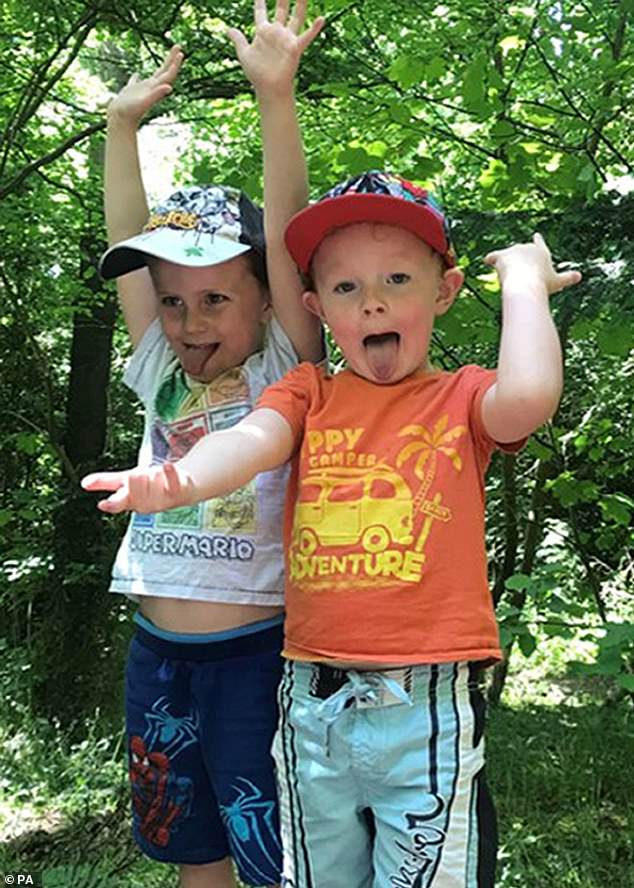 Four youngsters, including two brothers and their cousin, were playing in a park in Solihull when they fell into an ice lake and perished. Their names have finally been revealed.

It’s believed that on Sunday afternoon, Finlay Butler, 8, his brother Sam Butler, 6, and their cousin Thomas Stewart, 11, went to feed ducks at Babbs Mill Lake when the ice broke way and they fell into the chilly water.

Ten-year-old Jack Johnson became the fourth casualty at the Kingshurst beauty spot when he rushed to attempt to aid the other victims and also fell into the lake.

Finlay, Thomas, and Jack all passed away on Sunday, but Sam fought for three days to stay alive in critical care before succumbing to his illness yesterday. It is believed that all four of them had cardiac arrest.

Daniel Butler and Gemma Haran are the distraught parents of Finlay and Sam. Two years ago, the boys were seen in a photo beside a river with their father and a beloved dog.

Thomas was related to the brothers via his mother Rebecca, who is a sibling of their father Daniel. Richard Stewart is her partner and Thomas’s father. They’re all locals.

The lads were being pulled out of the lake by courageous bystanders, including heroic Jack who had hurried to aid after hearing cries, but the three and then Jack too were overcome by the frigid water.

Then, police, firefighters, and paramedics fought to save the children’s lives.

‘The boys had gone to the park with their cousin Thomas to feed the ducks,’ a family acquaintance told MailOnline.

They stepped out onto the ice, and as one fell through, others who were attempting to aid fell through as well.

Finlay, Thomas, and sad Jack all passed away on Sunday. Sam went away yesterday, after that. Gemma, his mother, is devastated. They are all. Simply said, it’s sad.

Josh Butler, a relative of the three boys, expressed gratitude to the Kingshurst neighborhood’s well-wishers for their assistance in the wake of the unfortunate event.

‘I don’t even know how to even start this or even put it into words but as we know have lost 3 beautiful children but I’m unfortunately too [sic] inform other family members and friends who may[be] don’t know but that was [sic] our beautiful kids [.] we have lost 2 and 1 is still fighting strong,’ Josh wrote in a Facebook post before Sam lost his battle for life.

“The affection and support from the community are much appreciated,”

We appreciate all of your messages and have seen them all, however right now we need some time and space.

‘This is a great shock to everyone but also a larger shock to my family..

Once again, I want to thank everyone for their support and affection. Also, don’t forget to embrace and kiss your loved ones.

I’m going to miss you forever and always, boys.

It’s unlikely that Jack was acquainted with the other three.

A six-year-old was among the three other kids who were on the frozen lake when the ice cracked, according to Jack’s aunt, who wrote on Facebook that he “rushed and attempted to rescue” them.

Days before Christmas, the terrible occurrence rocked the neighborhood to its very core.

The six-year-old in the hospital has lost his battle for life, the police agency said with “heartfelt regret.” Our hearts go out to the friends and families of those who were affected by this tragedy.

“Our hearts go out to them,” we say, “for the magnitude of the suffering they must be experiencing.”

The statement continued, “Specialist officers continue to speak with the family, and we will provide further details as soon as we are able.” The lake incident area will be cleared this evening when the searches are finished.

Within 16 hours of its creation, a fundraising campaign for the “Babbs Mill Princes” garnered more than £10,000.

A Gofundme website was created by friends to collect money for the bereaved family.

The boys had fallen through the ice after “forgetting the risks taught by their parents,” according to the event’s organizer Sharon Doyle, before courageous little Jack attempted to rescue them.

“Our hearts are torn for the four Little Princes,” she added.

“On Sunday, December 11, 2022, several kids had some playtime at a neighborhood park next to an open lake.

Being young and daring, they disregarded the risks their parents had warned them about and took a chance by entering the freezing lake.

Four lads entered the lake after falling through the ice. One of the boys’ panicked fathers and a dog walker dove into the water to attempt to save the youngsters.

No parent wants to lose their kid at such a young age, and tragically, no amount of money could ever bring them back to us. However, with our assistance, we can maybe lessen their anxiety about the expenses they will have to cover.

This tragic event has united a community and broken the hearts of individuals all across the globe.

We send our sympathies to the members of all three families.

After many members of the public unsuccessfully attempted to assist the kids, about a dozen emergency response cars rushed to the nature area.

13-year-old Oliwia Szewc was one of the first to run to the boys’ rescue. She attempted to pull the boys out of the water using tree branches, but they were too short.

After they were transported to shore, she and her buddy subsequently gave up their outerwear to help raise their temperatures while “praying” they would be okay.

She told ITV News about her first thoughts as she arrived at the scene: “I was just trying to think of other methods to at least aid them or do anything for them to float on the top of the water so they wouldn’t die.”

She claimed to have known she would have to hold off until emergency services arrived before a guy who she thought to be a relative of the boys dove into the river.

He plunged into the freezing lake and slashed up his legs, but Oliwia said, “He couldn’t really do anything since he was endangering his own life.” The cops stopped him, so he didn’t go forward.

The mother of one of the boys came, the youngster said, and was “in a panic,” while police officers broke up the ice while consoling her.

After dialing 999, the little girl gave West Midlands Police instructions while characterizing the call as a “total panic” since she was “still in shock.”

She said that ambulance staff ‘were asking for jackets and coats to attempt to get the boys, like, temperature back up’ when the youngsters were hauled out.

“I donated my coat, my buddy gave her jacket,” she continued. We were only sort of hoping for the boys’ well-being. To save any one of them, I would have been ready to sacrifice everything.

“It was really horrible,” I said, “and I had no idea what to do. I wanted to assist, but I couldn’t, but I tried.”

Tyrone Mings and John McGinn, footballers with Aston Villa, visited yesterday to see the carpet of flower tributes to the youngsters.

Mings, who has 17 England appearances and plays center defense for the Birmingham-based club, said: “It was a personal choice to express our respects.”

“I believe the whole city has been affected.”

We believed it was crucial to go personally to express our support.

“There are sometimes things more important than football, as we’ve seen with other things that have transpired around the city.

“We thought it was necessary to come here, pay our respects, and demonstrate that we were thinking about all that had occurred and the parents who are impacted by it,” they said.

A vigil for the gang who are being identified as the ‘Babbs Mills Boys’ is arranged at the lake on Saturday at 4pm.

Thomas was mentioned further in the message, saying, “You were like a brother to me. I really miss you.

Members of the emergency services, the NHS, politicians, the local football club Marston Green FC, and friends of the lads have all placed memorials at the site.

There were many flowers with cards for Jack.

Children’s toys, including many teddy bears with the words, “RIP lovely angels,” were also positioned at the improvised monument. I adore Siena.

To get to the lads, one police officer used his bare hands to break through the ice. Even though the student cop was cold and had minor injuries, they refused to take a break.

He is unquestionably a hero and placed his own life in danger, not only for him but for all the police who sought to aid, according to Rich Cooke, head of the West Midlands Police Federation, who spoke to the Daily Telegraph.

They managed to rescue the youngsters and give them the greatest chance of surviving.

Another cop needed medical treatment for hypothermia in the meantime. He was eventually let go.

Witness Sandra Colley, 52, told the Daily Telegraph that following the rescue, one of the cops was “trembling” and “silent,” and they sat together.

She said that she could see blood pouring from his hands and that he was hurt.

The witness described how she went and bought him a hot, sweet drink since he seemed shocked and traumatized.

The affected cops are receiving assistance.