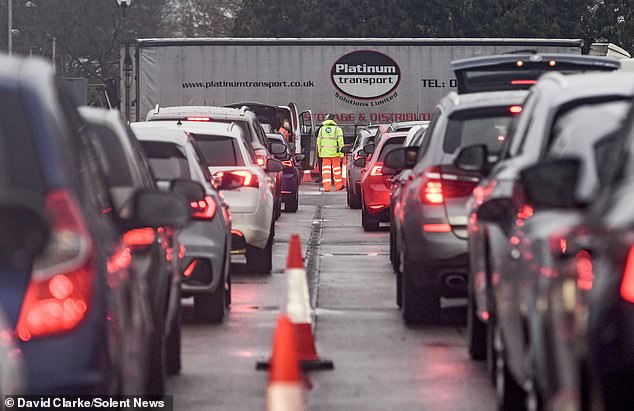 Families were left wondering if their Christmas plans could go when burst pipes left tens of thousands of households without running water as a result of the extreme weather.

Some have even used snow to flush their toilets and collected rainfall to do the dishes.

Homes in the south of England, including Hampshire, Sussex, and Kent, have been damaged by burst pipes caused by subzero temperatures.

However, Southern Water announced today that water supplies are beginning to increase to a point where they can satisfy demand.

Yesterday, there were lengthy lines at a bottled water station in Eastleigh, Hampshire.

Residents have been using bottled water for cooking, washing, and even toilet flushing.

In a statement, the business added, ‘Our water supply works are stable and our reservoir storage is full. This means that we can now enable water to flow via our network, and customers will have water within the next several hours.

We will progressively increase supplies as we repressurize the network to prevent pipe bursts.

This implies that it will take some time for all of our customers to be supplied again, and for some it might be as early as this evening. Customers who leave their homes today before their water is restored should ensure their faucets are turned off to prevent flooding.

We apologize for the inconvenience this event has caused and appreciate the consumers’ understanding.

Local neighbors waited in line for bottled water after being cut off by a burst pipe.

One father with a young child reported that he lost water “suddenly” on Wednesday afternoon.

Rob Barber from Southampton, Hampshire, reported on BBC Radio 4’s Today program that his Christmas plans were ruined because a broken pipe cut off his water supply.

He stated, “I have a small family at home, including a newborn who is still in diapers, and not being able to flush a toilet so close to Christmas is a terrible circumstance to be in.”

On Thursday, there was a line for bottled water at a station in Eastleigh, Hampshire.

If we don’t see an end in sight, we’ll have to seriously consider whether or not to spend Christmas at home.

Four water stations containing bottled water have been established in the affected area, with daily hours of 8 a.m. to 10 p.m.

However, yesterday there were reports that bottled water supplies were running low at one station, and there were large lines of people waiting to get it.

Mr. Barber said, “From what I gather, Southern Water ran out of water at some of these stations and had to close to refill.

There was a one-hour delay at one of the stations, which is obviously awful.

Long lines of hundreds of motorists developed to obtain bottled water at stations put up throughout Hampshire.

Angie Perkins of Tunbridge Wells, Kent, reported that her South East Water-supplied water had been inconsistent and stopped off since December 15.

The mother, like thousands of others in the region, collected water from bottled water stations in order to shower and clean herself.

She stated on BBC Radio 4: ‘Everyone is quite anxious about the Christmas issue.

Everyone has contingency plans, plan Bs. I was going to host Christmas for eight people at my home.

Families have waiting for water after approximately 20,000 houses in the south of England were cut off by ruptured pipes just before Christmas.

Southern Water stated that there would be a limited water supply for at least 48 hours as they were under’significant pressure’ due to burst pipes caused by rapid thawing from recent low temperatures.

A few days before Christmas, it is believed that at least 24,000 households are impacted by poor water pressure or no water at all.

In the affected districts, emergency water stations have been established, and the water supplier has offered to deliver water to those who are unable to obtain it.

This station was established because two water collecting locations in Winchester were too distant for some Southampton residents to travel.

Residents who were left without access to water in their houses owing to a burst pipe were given bottled water.

South East Water’s Incident Director, Douglas Whitfield, stated, “The vast majority of our customers in Kent have had their water restored, however we are aware of a few smaller, isolated problems that our team is working diligently to resolve.”

The situation in Sussex is also improving as our system made a significant comeback overnight.

Customers in Crowborough and Ashdown should have had their supplies restored, and we are working diligently to restore supplies to other affected areas by late this morning.

“We are continuing advising consumers to conserve water to help us maintain supplies for everyone and to check for leaks in their homes and businesses. Any water leaks should be repaired as soon as possible to prevent water waste.

As water returns to its source, it may seem discolored or foggy. This is totally natural and can be eliminated by running cold water from the faucet.

Please keep in mind that discolored water can be utilized for toilet flushing.

Ofwat, which governs the industry, stated: ‘Freezing temperatures followed by a rapid thaw have resulted in broken pipes and water supply problems.

We require water companies to stand up, respond immediately, and offer help and compensation where necessary during a difficult time.

A representative for Water UK stated, ‘Last weekend’s dramatic transition to milder weather resulted in the rapid thawing of burst plumbing in homes and businesses as well as an increase in leaks from buried water mains.

Water firms are working around the clock to increase supplies until the network’s levels return to normal.

We do not anticipate any additional freeze-thaw events during the Christmas season, as the temperature is expected to remain constant.

Water companies are working diligently to restore normal water service to affected homes and businesses as soon as possible, while supplying bottled water to families in the interim. Customers who are concerned about their water supply are urged to contact their local water provider.