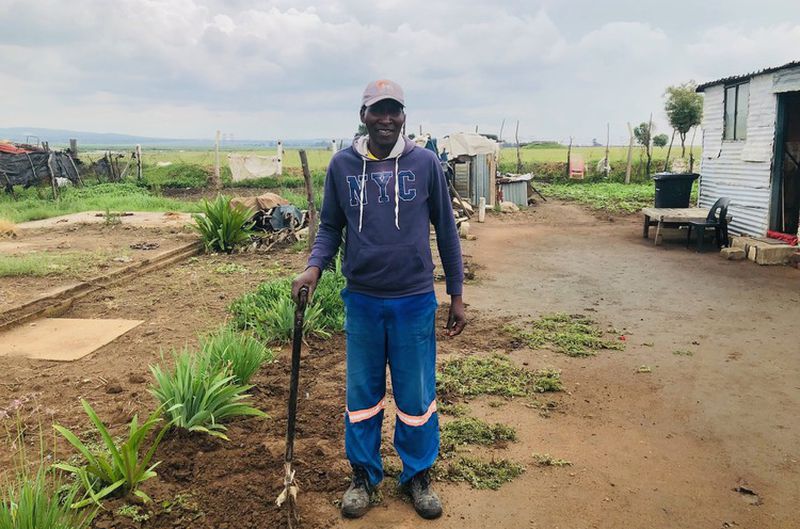 Since 2018, GroundUp has tracked the issue of the evacuation of people from the Marievale military base outside Nigel, Gauteng. In September 2021, we last reported on the evacuated community. We returned last week to check on their progress. We discovered that after years of litigation, court orders, and pledges by numerous governmental actors, little has been resolved.

Shalin Ruiters and her eight children have lived for the past five years in a dangerously constructed shack in Marievale’s Happiness Village. At night, it is impossible for them all to sleep so closely together. There is scarcely enough room for them to sit together indoors throughout the day.

The South African National Defense Force (SANDF), which owns the property, prohibits the expansion of structures in the village.

In 2017, the SANDF forcibly evicted more over eighty respondents from their residences on the Marievale Military Base. Ruiters is one of the respondents.

Some had lived in separate homes, bungalows, and dormitories on the base for decades. Up to three families shared some of the dwellings in the military camp. There was also a community center.

Soon after being evicted, the families constructed shacks on property just meters from their former residences and named it Happiness Village.

The community is struggling despite having overturned the SANDF’s wrongful eviction and getting an order for suitable alternative housing and services. They still lack toilets, and more than eighty houses share a single water tap.

The army and the City of Ekurhuleni attempted to move the people to temporary emergency housing in Duduza’s Zamani informal colony. Those that qualify will be considered for permanent accommodation in the John Dube housing project, which is now under development. However, the City claims that it is unable to predict when the housing project would be completed because it is dependent on money from the Gauteng Province, and the province keeps mute on project timelines.

There are also immigrant families living in Marievale that are extremely unlikely to be approved for public housing.

A few families consented to relocate, but Ruiters and others declined, citing the informal settlement’s overcrowding and dissimilarity to Happiness Village, as well as the necessity of migrating from Zamani at a later date. They desire to move directly into “permanent homes” and avoid having their lives uprooted twice more.

The occupants were served with a final eviction order in September 2021, subject to the provision of a relocation plan. Nonetheless, many Happiness Village households have maintained their fight.

The municipality submitted their relocation plan to Lawyers for Human Rights (LHR) in December 2022. LHR has defended the family in multiple legal cases.

The City still provides Zamani and corrugated iron constructions with steel-framed doors, windows, and a cement floor (24 square meters) that have a lifespan in excess of five years. It is stated that the constructions can be disassembled three times, are simple to transport, store, and assemble, and may be adapted to local requirements. The SANDF would furnish relocation trucks.

The City guarantees access to water, chemical toilets, community waste containers, and electricity with prepayment meters. Those who are employed and not impoverished would pay for fundamental services. Those who qualify will be considered for permanent housing, while others will be relocated to an area of Zamani chosen by the municipality for a new development.

Chris Koetsioe, one of the Marievale family litigants, stated, “It appears that our position has not changed.” “As a precaution, the residents wish to remain in Happiness until they can receive a house.”

People should be relocated to a location where they would receive tenure security or title deeds.

“There are so many people waiting for housing in informal settlements near Nigel,” explains Ruiters.

“At one time, the residents of Zamani protested because they did not want Marievale citizens to seize their homes. Additionally, the environment is hazardous and crowded. My family and I will stay at Happiness Village until we purchase a home.”

The past year, according to Hendricks Makua, who maintains a vast garden in Happiness Village, has been rather tranquil. The soldiers have ceased their brutality against the community. If we attempt to enlarge [our shacks], however, they will come and stop us, indicating that they do not want us here. “Getting a house is the only thing that will bring me peace.”

“If they offer us an RDP home, our hens, dogs, and garden may not have enough room. Where will we go hunting if we are never hungry here? We also collect firewood from adjacent forests. “It’s unfair that they are moving us to a random informal settlement,” Giyana stated.

“I am certain that I would miss Happiness Village terribly,” she stated.

»Families expelled from Marievale Army Base are still in limbo«