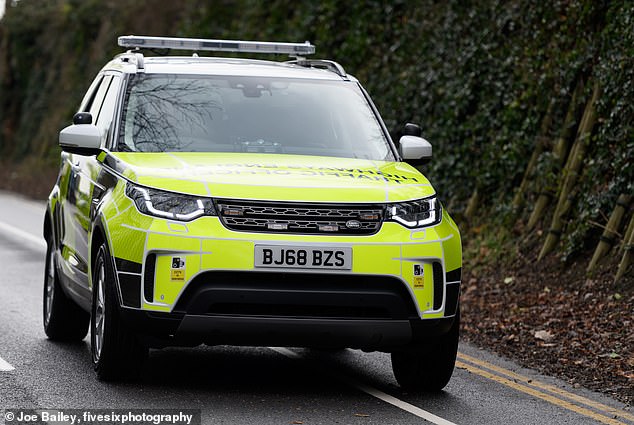 Families have been told to leave early for their Christmas vacation as National Highways employees begin their strike today, ushering in several days of transport havoc.

In a dispute over wages, employees of the government company that runs and maintains the largest roads in the United Kingdom have walked off the job and will not return until Boxing Day.

Despite the fact that national strikes do not begin until Christmas Eve, industrial action by union members will cripple the rail network, with some trains scheduled to stop running on Friday.

In addition to the turmoil on the roads, individuals attempting to enter or exit the nation during the holiday season will have difficulties, as Border Force employees will be on strike for eight days before the New Year beginning tomorrow.

National Highways traffic officers are on strike till after Christmas due to a pay disagreement.

In the coming days, millions of Britons will take to the roadways to visit family and friends throughout the holiday season.

The combined actions are expected to make the upcoming days exceptionally challenging for millions of travelers traveling to visit family for the holidays.

It follows a week in which nurses and ambulance workers went on strike due to a dispute between their unions and the government over pay, causing more disruption to the National Health Service.

Experts on travel have recommended people to begin their Christmas travels as early as possible in order to minimize disruptions.

Simon Calder stated on Good Morning Britain, “I’ve never had a Christmas with so much travel stress.”

My recommendation is to begin as early as possible.

“By the end of the week and on Christmas Day, the roads will be extremely congested and extremely difficult to navigate.

The railways, however, will cease operations either Friday night or early Saturday morning.

Traffic cops and regional operational centre employees in London and south-east England have walked off the job as a result of today’s action by the Public and Commercial Services (PCS) union.

National Highways, formerly known as Highways England, develops, designs, constructs, and maintains the busiest routes in the United Kingdom, including motorways and a number of A roads.

The AA predicts that 20 million automobile trips will be made in the days leading up to Christmas Day as a result of strike action on the railroads.

Mark Serwotka, general secretary of the PCS, stated, ‘We are aware that our action is likely to inconvenience travelers, but even as we escalate it before Christmas, we remind people that this dispute could be settled today [yesterday] if the government offers more money.

Our members inform us that they must reduce their Christmas spending since they are running out of money. They have been offered a pay raise below inflation at a time when inflation is above 10%.’

After Christmas, National Highways strikes will continue on December 30, when traffic cops in the West Midlands and south-west England engage in industrial action. On January 6, it will hit the East Midlands and eastern England.

On January 3 and 4, all PCS members who work as traffic officers on National Highways will go on strike.

The AA forecasts that 20 million motor trips will take place in the days leading up to Christmas Day, causing considerable disruption on the roads. The M25 in Dartford, Kent, is pictured.

People traveling via airports in the coming days may encounter significant delays due to a strike by Border Force personnel.

RMT members, pictured here in front of Euston Station, will go on strike on Christmas Eve.

Tomorrow, Border Force employees represented by the PCS union will go on strike, adding to the pandemonium.

Approximately 1,000 employees at Britain’s airports, ports, and Channel Tunnel will go on strike from December 23 to 26 and again from December 28 to 31.

The government has drafted members of the Armed Forces to fill in during the strike, which will impact Heathrow, Birmingham, Cardiff, Gatwick, Glasgow, and Manchester airports, as well as the port of Newhaven, East Sussex.

Despite this, travelers are still advised to anticipate disruptions and delays on their journeys, with passport control lines possibly becoming so long that people are delayed on planes.

Steve Dann, chief operational officer of the Border Force, stated, ‘Border Force’s first priority is maintaining the safety and security of our borders, and we will not compromise on this. It cannot be negotiated.

Border Force has been conducting considerable planning in anticipation of the strike action for a number of months. We have been working with the travel sector and continue to work closely with all UK ports to assess the impact of the news on the traveling public.

We have solid systems in place to minimize delays for passengers, but we’ve made it abundantly clear from the outset that individuals must be prepared for disruptions and take proactive steps to plan ahead.

On Christmas Eve, they will be joined by bus drivers and rail employees, the latter of whom have already caused months of disruption in their dispute with the government.

In addition, rail workers are scheduled to go on strike from December 24 to 29 over their ongoing salary and benefits dispute.

Rail workers will go on strike from December 24 to December 29 as they continue to demand inflation-beating wage increases and assurances on working conditions.

As early as 8 a.m. on Christmas Eve, the Rail, Maritime, and Transport union (RMT) strike will cause some trains to stop running.

In some areas of the country, rail executives are recommending families to leave the day before Christmas if they want to guarantee seeing their loved ones.

It disproves the assertions of RMT chief Mick Lynch, who stated that his union’s strike on Christmas Eve would have little effect on travelers because it wouldn’t begin until 6 p.m., when numerous engineering works began on the network.

Members of the union will go on strike from 6 p.m. on Christmas Eve until 6 a.m. on December 27.

Andrew Haines, the CEO of Network Rail, stated: “RMT claims that their planned strike action during the holiday season is “not targeting Christmas” would be ridiculous if the repercussions weren’t so unpleasant for so many people.

“I am very sorry that our passengers must suffer the burden of the RMT’s unnecessary strike action when a fair offer is on the table and just one-third of the workforce has rejected it. Two of our three unions have already accepted, therefore the RMT must reconsider.