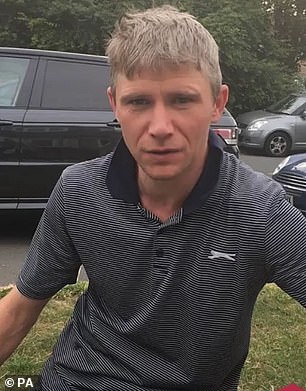 Two males have been identified as the victims of a double homicide described as “very brutal.”

Adam Fanelli, a 39-year-old father of three, and Patrick Howard, a 27-year-old man, were murdered on November 13 in Houghton Regis, Bedfordshire.

A third individual was severely injured and remains hospitalized with stab wounds.

Mr. Fanelli’s bereaved family eulogized him as a ‘larger-than-life personality with a heart the size of a house’

The relatives of Mr. Howard stated, ‘Patrick was the most charming and mischievous man you could ever meet. He would have done anything for anyone and had the purest of hearts.

Nicholas Papworth, 31, and Curtis Long, 32, have been charged with two charges of murder and one count of attempted murder.

One count of perverting the course of justice has been filed against Papworth.

A third man in his forties was detained on November 16 and remains in detention on suspicion of murder.

Adam Fanelli, left, and Patrick Howard, right, were slain in the attack in Houghton Regis, Bedfordshire, on November 13th.

At 1:18 a.m. on Sunday, Bedfordshire Police officers were dispatched to Tithe Farm Road after receiving allegations that a man had been struck by a vehicle.

When emergency personnel arrived, they discovered three individuals with stab wounds; two were pronounced dead at the site, while the third required immediate medical care.

In a heartfelt homage to the father of three, Fanelli’s family stated, ‘Words cannot express the impact this tragedy has had and will continue to have on our family and community forever.

Our thoughts and prayers of encouragement are with the other affected families. Adam was without a doubt a devoted and caring father to his three amazing children.

‘Despite his diminutive appearance, he possessed a larger-than-life personality and a heart the size of a mansion.

He embodied the maxim “once met, never forgotten” in every possible way. He will be dearly missed, leaving a vacuum that will never be filled.

The family would like to thank everyone for their condolences and touching tributes to Adam and Pat.

Nicholas Papworth, 31, and Curtis Long, 32, have been charged with two charges of murder and one count of attempted murder. Pictured at the scene are officers.

Bedfordshire Police stated that officers were dispatched to a report of a man being struck by a vehicle, but upon arrival discovered three men who had been stabbed. A third individual has been apprehended and is being held by police.

The relatives of Howard stated, ‘Patrick was the most charming and mischievous man you could ever meet. He would have done anything for anyone and has the purest of hearts.

He was the heart and spirit of the village, and no one did not adore him. Patrick will be greatly missed and has left a void in the hearts of far too many people.

Patrick would have lived forever if love could have saved him. We will always keep Adam’s family in our thoughts and prayers.

Additionally, we wish the third victim a swift and complete recovery. I would like to extend my gratitude to everyone who has provided information thus far.

“Our inquiries into the events before this fatal stabbing are ongoing, and we are eager to hear from anyone who may assist our inquiry.”

This is a particularly violent incident that has occurred in a severely afflicted community.

We are determined to bringing to justice those responsible for this terrible attack.

»‘Extremely vicious’ stabbing kills a man, 27, and a 39-year-old father in Bedfordshire«