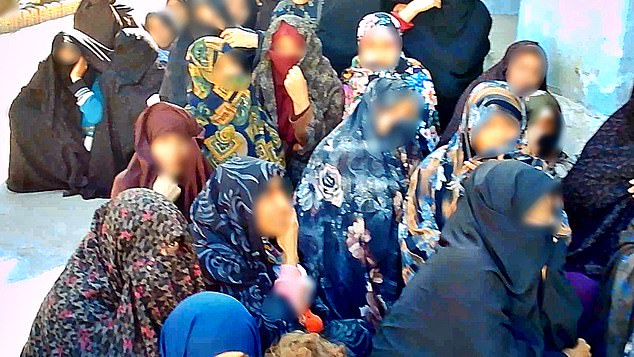 Afghan women are being jailed by the Taliban for ‘immoral behaviour’ – including travelling in a taxi without a male relative or appearing in photographs with male classmates.

Scores have been imprisoned without being charged or tried in court in a shocking breach of the promises made to the outside world.

Footage taken by an undercover camera crew inside Herat’s central jail found all the women interviewed had been incarcerated for minor infringements of strict Islamic law.

Some claimed they had been tasered and beaten, while others told how they were being pressurised to marry members of the Taliban in exchange for their freedom.

The footage, filmed by British Iranian journalist Ramita Navai for an ITV documentary, revealed dozens of women huddling in courtyards and more than 50 others locked up in nearby cells.

It comes despite promises that the Taliban had changed and its Afghan government would uphold the rights of girls and women.

The documentary, Afghanistan: No Country For Women, also uncovered stories of Taliban fighters abducting young girls off the street and forcing them into marriage.

One Taliban commander is said to have demanded that a father consent to his daughter’s marriage by putting a gun to his head.

The film crew found some women had committed suicide by setting themselves on fire or drinking bleach to escape domestic violence after the Taliban, which swept back into power in September last year, closed refuges and charities.

‘We’re entering a world where women are disappearing, where they’re jailed without trial, their fate unknown; where girls are abducted from their homes and forcibly married; where women live in hiding, hunted and in fear of their lives and those who speak out risk imprisonment,’ Navai said.

‘This is the Afghanistan the Taliban don’t want the world to see.’

She investigated the fate of Afghanistan’s women in November for ITV’s Exposure series.

She followed the story of one girl, ‘Maryam’, who dreamed of being a film director, but disappeared.

Navai found that she was incarcerated by the Esteghbaarat intelligence service in Herat’s jail. In a letter smuggled out of prison,

Maryam said her friends had been arrested for taking a taxi without a male relative. When she went to the police to help she was arrested.

Maryam wrote. ‘There were three people interrogating me. They kept tasering me.’ Describing how a Taliban official went through her mobile phone, she said: ‘He saw pictures of my classmates.

‘He started swearing, telling me I’m a whore. Why else would I have photos taken with boys? They tasered me two or three times.

They beat me with a gun, then held it to my head saying, “Tell the truth”.’

She and her friends were released after family members pulled strings. She then fled to a safe house.

‘I’m not sure what the future holds for me,’ she said. ‘Everything has been ruined. I don’t see much hope.

‘If I can’t leave Afghanistan, I’ll have to find a corner and stay there and then kind of fade away.

‘If the government remains as it is there isn’t a single ray of light here, just darkness.’

Bilal Karimi, the Taliban’s deputy chief spokesman, dismissed all the allegations as ‘lies’.

Exposure – Afghanistan: No Country For Women, will be screened on ITV at 10.15pm tonight.