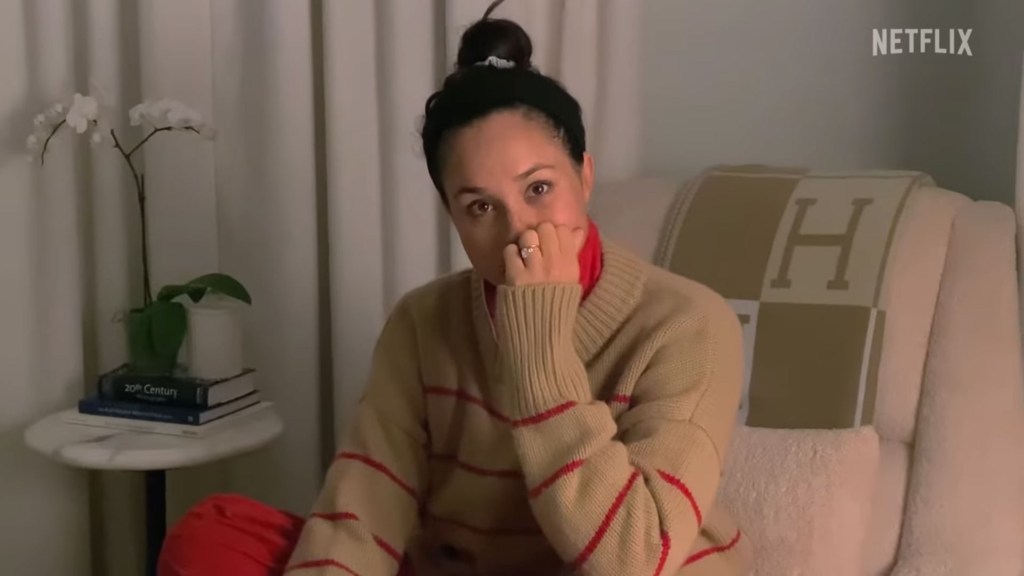 The first palace rule is to never mention it.

A former Buckingham Palace staffer alleges they were bullied by the Duchess of Sussex. On Wednesday, they called on the British monarchy to respond to the docuseries “Harry & Meghan.”

The staffer, who no longer works at the Palace, told The Times UK that removing the NDA is the only way to clear up the charges.

“The only way to end it once for good is for us to be allowed to speak, and for the palace to firmly reject their lies,” said the ex-staffer.

However, Buckingham Palace has been steadfast in not responding to any claims made by the couple. The former worker told The Times they think the silence is a mistake and the palace should “step up” and “publicly respond to [the Sussexes’] attacks.”

“It’s emotionally draining,” the anonymous ex-employee added. “It feels like there’s no end to it.”

Netflix dropped the one-minute trailer for the six-episode docuseries on Monday featuring Harry, 38, and his wife Meghan, 41, talking about the challenges of living in the firm.

“There’s a hierarchy of the family,” said Prince Harry in the video. “You know, there’s leaking, but there’s also planting of stories. No one knows the full truth. We know the full truth.”

The former Palace employee claimed to The Times that Markle often calls upon journalist Omid Scobie to convey her side of the story.

“They always use vague terms ‘the truth,’ ‘my truth,’ but nothing concrete is said,” they told the newspaper.

The employee, who no longer works at the Palace, said that the only way for the allegations to be set straight is to remove the restrictions of the NDA and allow staff members to speak freely.Netflix

While all palace staffers sign strict confidentiality agreements in order to work there, the former worker claimed to The Times that Markle is pushing buttons, alleging that she’s hoping they break NDAs.

“She knows we can’t financially protect ourselves by going to court, so she keeps pushing. It’s all a game for her. And she is loving it,” they said. “I certainly have chosen to remain silent out of respect for the crown, but if they keep attacking us and our characters, reputation etc we need to feel we are equally supported by the royal family.”

Another source told the British paper that palace insiders were “seething with rage” at allegations made in the forthcoming docuseries.

Netflix dropped the one-minute trailer for the six-episode docuseries on Monday featuring Harry, 38, and his wife Meghan, 41, talking about the challenges of living in the Windsor Corporation.Netflix

The trailer was also slammed by online trolls who called the series “hypocritical.”

“I love the part where Harry and Meghan write a letter making it clear that the monarchy is a horribly oppressive system,” one user mused. “Right before signing their letter « The Duke and Duchess of Sussex ».”

“I love the part when after spending 39 years in the royal family, Harry suddenly realizes that there is a hierarchy,” they wrote

The first three episodes of “Harry & Meghan” are set to make their debut on Netflix on December 8, 2022, with the final three dropping on December 15.

»Ex-palace staffers’seething with wrath’ over ‘falsehoods’ in ‘Harry & Meghan’«