Skip to content
Home » News » News » Every parent’s dream: Expandable children’s shoes that fit long enough to be worn out are on the way 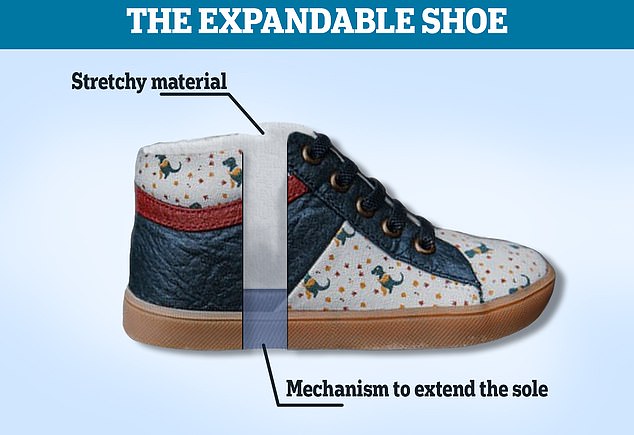 An extendable children’s shoe that can stretch a size and a half could soon appear in British stores.

Shoe brand Pip & Henry is developing the new invention for under-sevens, the age where children’s feet grow most quickly.

Ms Doodhmal, 38, told The Guardian: ‘I think we’re about a year away from it being in the shops.

‘We have to test the prototypes and then take it to industry experts for their feedback … then come up with a final concept that’s ready for commercial launch.’

‘It is my ambition to keep the cost down as much as possible’, she explained.

The entrepreneur got the idea while watching Blue Planet with her baby daughter.

She said: ‘On the one hand I was showing her Blue Planet, and trying to get her inspired by nature, but on the other, she was outgrowing clothing and footwear faster than I could effectively recycle it.’

Design proposals include an extendable sole with an interlocking, jigsaw-style mechanism.

‘The funding is substantial enough to take us all the way,’ Ms Doodhmal added.

‘I feel very confident we will be able to come up with something really valuable and robust.’

Brits purchase 80million pairs of shoes each year – including 60million for children.

More than 85 per cent end up on landfill sites, Ms Doodhmal said.

She said: ‘We won’t move the needle on that 85 [per cent] if we don’t take this concept to the mass market.

John Lewis sustainability director Marija Rompani said the Circular Future Fund, which has also given money to Scottish libraries and the University of Leeds, could have ‘real impact’.

She said: ‘Our throwaway culture, and the waste it generates, are unquestionably among the biggest challenges we will face in our lifetime and tackling them will require a different kind of thinking.’