Skip to content
Home » News » Breaking News » Evan Neal hopes to play against the Cowboys if he is “100 percent.” 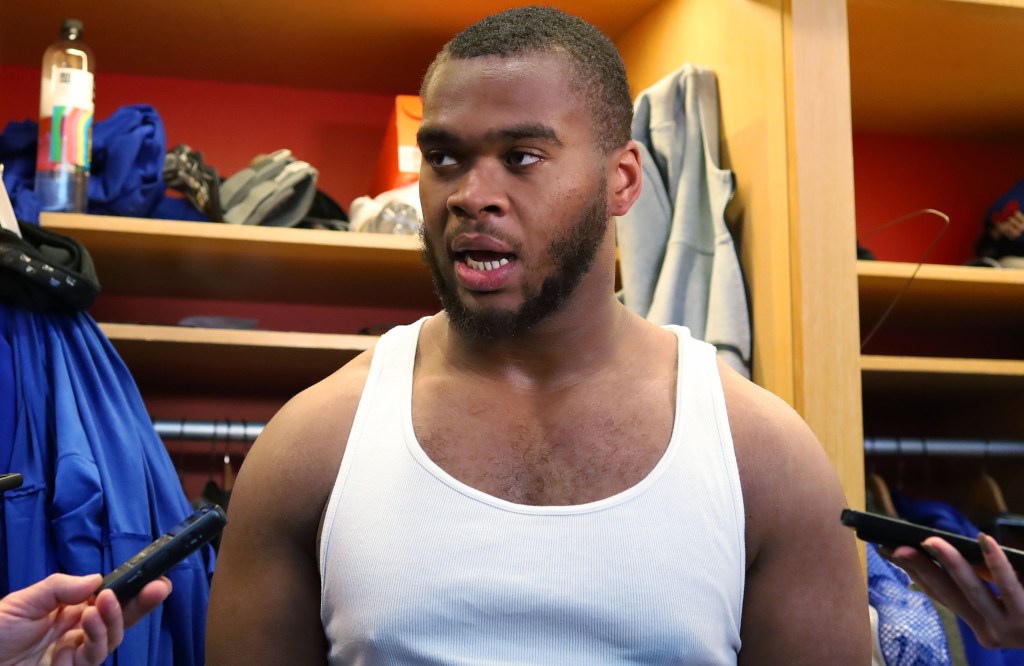 Thanksgiving for Evan Neal was intended to be more about a measuring stick than a drumstick.

It may still be the case if the Giants’ rookie right tackle recovers from a three-game injury hiatus and starts against the Cowboys. He will likely be a game-time decision.

Neal said on Tuesday with tempered optimism, “I’m just making sure that whenever I do return to the field, I’m 100 percent ready to go.” “I don’t want to leave any stone unturned and make a hasty decision that leads to a negative outcome. I’m essentially dotting every I and crossing every t.”

Neal’s rookie season reached its low point on September 26 when he allowed three sacks and five pressures to Giant killer Demarcus Lawrence. Thursday’s rematches between the Giants and Cowboys, as well as the rematch between Neal and Lawrence, felt like an opportunity to demonstrate the improvement demonstrated by allowing just one sack and six quarterback hits over the next four games.

Neal stated, “I’d love to be in this game.” “However, we are fortunate to see them twice yearly every year. It will be great.”

The Giants are capable of starting any one of three right tackles. If Neal is unable to continue, Tyre Phillips (neck) is next. Matt Peart, who finished the game on Sunday, could return to the starting lineup for the first time since last season, before a torn ACL sidelined him until recently, if Phillips is unable to play.

According to Neal, the Cowboys lead the NFL in defensive alignment movement.

Neal stated, “Regardless of whether I play this week or not, I will have another opportunity to compete against NFL competition.”

Peart has never allowed a sack in 72 career snaps against the Cowboys over three games. Neal stated that he is close to a return, but there are other concerns on the offensive line, where four starters (with the exception of right guard Mark Glowinski) and two key reserves are injured.

“Until you take those live reps, you’ll never know for sure,” Neal said. “I can do side drills and pass sets and go on the boards, but that is not blocking an NFL defensive end in a game situation.” I won’t know until I return to the field.”

With only four walk-throughs and no actual practices scheduled this week following Sunday’s loss to the Lions, it is difficult to determine how much progress Neal made.

“Obviously, Evan wants to return to the field,” said head coach Brian Daboll. “I’d say that what’s challenging is how we’re preparing to play this game. It is not always, “Go outside and run around.” It is treatment, so speak with the trainers and the player. Then we will reach a decision.”

»Evan Neal hopes to play against the Cowboys if he is “100 percent.”«