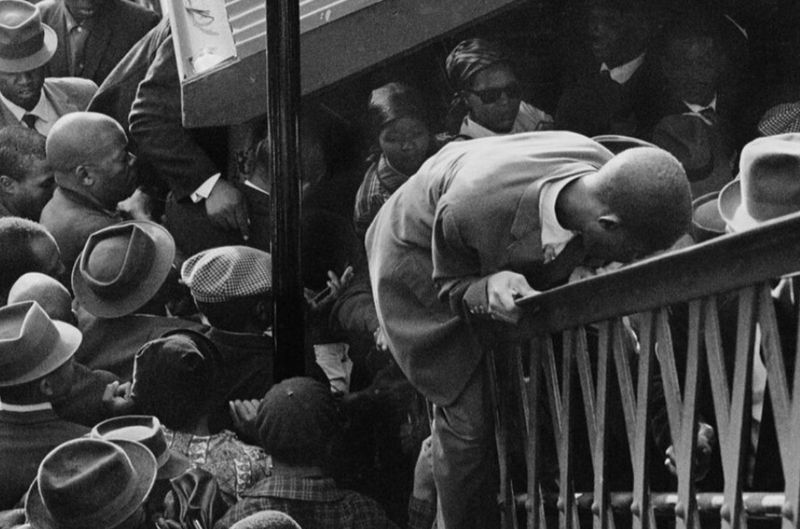 In 1940, photographer Ernest Cole was born in the township of Eersterust in Pretoria, South Africa, before apartheid was fully instituted in 1948.

When he was 20, thousands of people gathered outside a police station in Sharpeville township to protest the white minority government’s requirement that they carry pass books. At least 69 people were shot and killed on that date, and a state of emergency was established. The Sharpeville Massacre is considered a turning event in the South African independence fight. It marked the beginning of decades in which pictures of human rights violations in South Africa were rarely absent from worldwide news coverage.

This coverage featured significant photographs of Cole. In contrast to many of his colleagues, he did not concentrate on documenting protests.

Cover of a book bearing the words Aperture Foundation
Instead, Cole made thousands of images that depicted apartheid’s structural cruelty in exquisite detail. He intended to publish these photographs in a photobook that he would distribute abroad. Cole fled South Africa with an exit permit in 1966. He was never to return.

Cole’s scathing and thorough critique of apartheid, House of Bondage, was published in the United States and the United Kingdom in 1967. The photobook was first banned in South Africa, but some of its photographs later made their way back into the nation via opposition publications.

Cole continued to work as a photographer in the United States and Sweden after leaving South Africa. House of Bondage was out of print by the 1980s. Unknown was the location of the images he created in the United States during the 1960s and 1970s, some of which were commissioned by the Ford Foundation and the United States Information Agency. In 2017, a portion of Cole’s archive was located in Sweden and restored to his family.

The Aperture Foundation has published a new edition of Cole’s seminal book as a result of the rediscovery of more than 60,000 negatives and other papers, including notebooks.

It has three new introductory articles, but the body of the book, a deliberate, unrelenting tour through the fractured society apartheid created, remains untouched. It is divided into 15 sections, such as The Mines, Police and Passes, Education for Servitude, Heirs of Poverty, and Banishment, all viewed through Cole’s unblinking vision.

The new edition also includes a segment of previously unpublished photographs that Cole may have meant for House of Bondage but withheld so as not to detract from the major message of the work. This section, entitled Black Ingenuity, contains thirty photographs of musicians, dancers, artists, and boxers. They illustrate how social and creative spaces were established despite apartheid.

The Photography Legacy Project and the Historical Papers Research Archive have digitized and made accessible online a selection of the materials returned to the Cole family.

Among Cole’s hundreds of letters and press clippings is a worn notebook containing handwritten reflections on the difficulties of black living under apartheid. In this little book, Cole describes the stories of those he encountered on his attempt to fully document the dehumanizing “crucible of racism” in South Africa.

The story of a family’s struggle to send their sons to school is written in neat cursive script on an ancient notebook with a spiral binding.

Cole reveals himself to be a talented journalist with an eye for detail, and the House of Bondage archive demonstrates the significant research that went into its creation. His meticulous notes include the accounts of mothers, employees, and educators… How a young man lost his passbook and was too terrified to disclose it, preventing him from taking his examinations. Why are there no desks and chairs in the school for the children? How a woman has only purchased one skirt for herself during her whole working life.

A police officer in an outdated outfit places his hand on the shoulder of a young man dressed as a laborer. Suit-clad men observe with their hands in their pockets.

Cole was stateless for decades and experienced mental breakdowns because to the racism he encountered in South Africa, the United States, and Europe. Beginning in the mid-1970s, he was homeless and spent time in New York City subways, as well as shelters and friends’ homes. In 1990, he died of pancreatic cancer while in exile.

Anti-apartheid activist and poet Mongane Wally Serote observes in his essay for the new edition of House of Bondage:

The urge to create a better world is the crux of Cole’s endeavor, which he elucidates with precision. Seeing these photos, he believes, is not only to be reminded of the cruelty of apartheid, but also to be stunned into seeing how the structural violence of the past continues to exist.

Seeing the suffering represented in Cole’s images begs the obvious question: why, if people are living in horror, haven’t these conditions been questioned and altered? Why, why do these conditions endure for so long?

At least a portion of Serote’s regret can be explained by the reality that no one has ever been held accountable for designing and administering the unjust apartheid regime. The book by Cole is a striking reminder not just of what apartheid was, but also of the work that must be done to bring down the house of slavery.