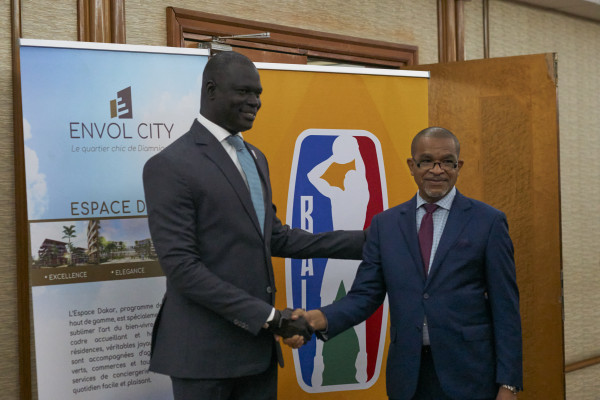 The BAL (theBAL.com) and Envol City to Engage Fans in Senegal Beginning Next Season; top Eight BAL Teams to Compete at BAL Playoffs and Finals in Kigali, Rwanda from May 21-28.

The Basketball Africa League (BAL) and Envol City – an innovative real-estate project in the upscale district of Diamniadio in Dakar, Senegal – today announced a multiyear partnership that makes Envol City an official partner of the BAL and the league’s Country Partner in Senegal.

Beginning with the 2023 BAL season, the BAL and Envol City will collaborate on fan engagement initiatives that showcase the convergence of sport, music, food, art, and fashion, including at BAL Fan Zones during games in Dakar.  The first BAL Fan Zone was held in Dakar from March 5-15 and featured a DJ, live musical performances, concession stands, merchandise sales, opportunities to meet NBA and basketball legends, and more.  Envol City branding will also be visible on the BAL court and broadcasts during the 2022 BAL Playoffs, which will feature the top eight teams from the league’s Sahara and Nile Conferences competing in a single-elimination tournament and Finals at Kigali Arena in Rwanda from May 21-28.

“We are pleased to partner with Envol City to engage the passionate BAL fans in Senegal while shining a light on Africa’s capacity to be a global leader in sports and entertainment,” said BAL President Amadou Gallo Fall.  “Envol City shares our commitment to a future for Africa based on modernity and innovation, and we look forward to working together to use the convening and transformative power of sports to provide memorable experiences to BAL fans and guests.”

“Envol City is an innovative and modern real estate project, firmly focused on the future,” said Envol City CEO Moctar Thiam.  “Our vision for Africa in the future is one that is ambitious, innovative and a symbol of excellence.  It is therefore only natural for us to establish a partnership with BAL, a well-established brand on the continent and beyond.  Through our strong partnership with BAL, we want to be an example for pan-African youth and create bridges that build the path towards a common vision for Africa’s future.”

Winners of the quarterfinal matchups will meet in the semifinals on May 25 for the chance to advance to the 2022 BAL Finals, which will be held May 28 at 12:00 p.m. ET / 6:00 p.m. CAT and will air in Africa on ESPN, Canal+, VisionView TV and VOA radio, and around the world on AFN, ESPNews, NBA TV International, Tencent Sports, TSN, the NBA App, NBA.com and NBA.com/BAL.

About Envol City:
Located 30 km from Dakar in the heart of the Diamniadio urban center, Envol City, “Diamniadio’s Chic District,” is more than a real estate project: it is a vision of the Africa of the future based on excellence and innovation. Three interconnected areas offering housing, high-end residences and top-notch services – Espace Dakar, Espace Timbuktu and Espace Lagos – surrounding the United Nations House, a hub of openness to the world. Between modernity – through its programmes and services – and tradition – through the materials employed and respect for the environment – Envol City offers you the best of both worlds. Characterized by its modern, sustainable and timeless bioclimatic architecture fully adapted to the tropical climate, Envol City builds a perfectly harmonious relationship with its existing environment. Envol City Video: https://bit.ly/3FHt1K8

About the BAL:
The Basketball Africa League (BAL), a partnership between the International Basketball Federation (FIBA) and the NBA, is a new professional league featuring 12 club teams from across Africa.  Headquartered in Dakar, Senegal, the BAL builds on the foundation of club competitions FIBA Regional Office Africa has organized in Africa and marks the NBA’s first collaboration to operate a league outside North America.  Fans can follow the BAL (@theBAL) on Facebook, Instagram, Twitter and YouTube and register their interest in receiving more information at NBA.com/BAL.