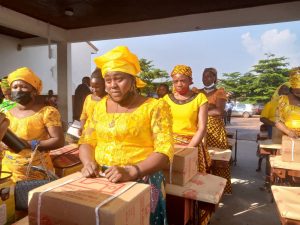 The wife of Nigeria’s Inspector General of Police and President of Police Officers Wives’ Association, POWA, Hajiya Hajara Usman Alkali Baba, has donated empowerment tools to over fifty wives of Police officers who died during the EndSARS protest and unknown gunmen attacks in Anambra State.

Hajiya Alkali Baba donated the tools alongside the wife of Governor of Anambra State and founder of the charity organization, Caring Family Enhancement Initiative, CAFE, Dr Ebelechukwu Obiano and other high ranking Police officers wives in Awka, the State capital.

Correspondent, Daniel Ezeigwe, reports that the IGP’S wife was in Anambra State in continuation of her tour of States across Nigeria, aimed at promoting her POWA vision, which dwells on welfare and education of Police officer’ wives and children, and most importantly, to reach out to wives of Police officers who were affected during the nationwide protests.

Equipment given to the fifty widows included sewing machines, multipurpose grinding machines, industrial hair dryers and food stuff, even as the IGP’s wife also made donation to one of the community children’s homes in the State.

In her address before the empowerment, Hajiya Alkali Baba, said the visit was to rebuild relationship and boost morale of members of POWA in the State and those at the national level, noting that with the difficulties that come with national service with regards to the Nigeria Police Force, the onus lies on the wives to give their husbands support to serve better.

The IGP’s wife, while explaining her three-point POWA vision which centres on education, welfare and health, said she looks forward to seeing Police wives and children live better, pledging to check up on those empowered to ensure that they use the equipment to help their families

In her speech, the Anambra State Governor’s wife, Dr Obiano said the intervention could not have come at a better time, noting that what happened to the Nigeria Police Force during the ugly EndSARS time actually demoralized both Policemen and their families.

Dr Obiano, who said that the empowerment would go a long way in emboldening Police families and encouraging the women, commended the IGP’s wife for taking a different step in her capacity to motivate and change the face of the organization.

Relating the IGP’s wife’s gesture to her CAFE’s accomplishments, the Governor’s wife said that her interest in children, women and youths, especially the less privileged has yielded great results, with over five thousand women and youths trained and empowered by her NGO, over twenty eight free houses built for indigent widows in Anambra State, among others.