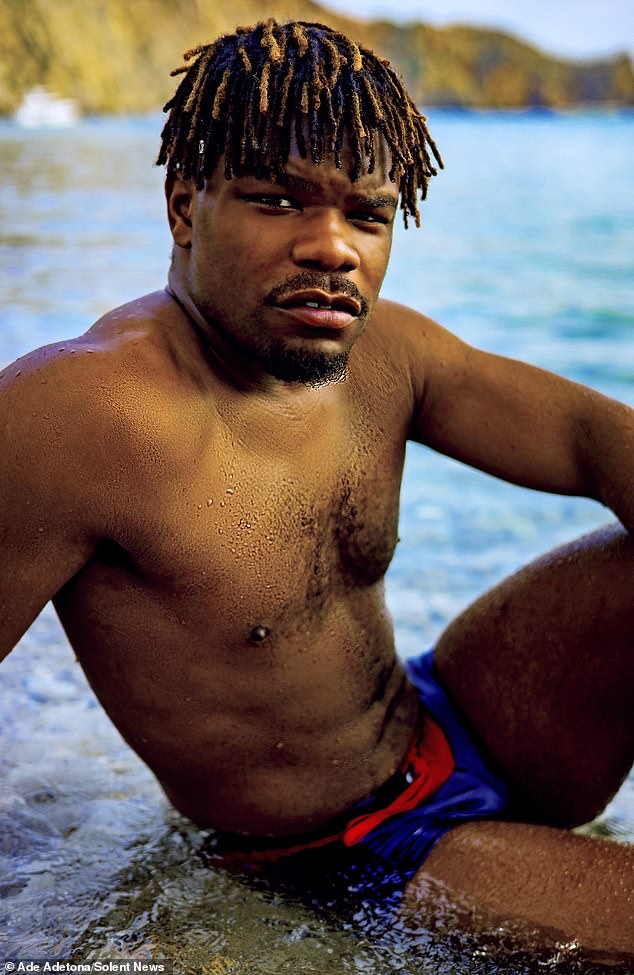 Today, the mother of missing rugby star Levi Davis wept as she recalled the last time she held her son before he disappeared from Barcelona nearly three months ago.

Julie Davis stated on Good Morning Britain that never hearing from Levi again was her “worst nightmare,” adding that her “mother’s instinct” advised her to embrace the 24-year-old at their last meeting “because you never know if this is going to be your last.”

Susanna Reid then reached across the desk to grasp Ms. Davis’ hand as she grew obviously emotional while explaining the ‘frustrations’ of attempting to acquire updates from the Spanish police and the British consulate.

Private investigators are already investigating a ‘£100,000 debt’ Levi may have owed to a Somali gang, while Ms. Davis has urged authorities to explore Barcelona’s port following reports of a person in the water the morning after Levi vanished.

Levi Davis poses on a beach in Ibiza in what is believed to be one of the final images ever taken of the 24-year-old rugby player before he vanished from Barcelona on October 29.

Susanna Reid went across the desk to grasp Ms Davis’ hand as she grew visibly distraught when detailing the ‘frustrations’ of attempting to acquire updates from the Spanish police and the British consulate.

Ms. Davis said on GMB this morning that potentially crucial CCTV footage had been deleted by the time the courts in Spain allowed investigators permission to access it, while the ‘linguistic barrier’ created delays in collecting case-related material.

Susanna told Ms. Davis that it was ‘encouraging’ that’so much effort’ was still being devoted to locating Levi, including posters, podcasts, and investigators, and added, ‘Our hearts are truly with you.’

Ed Balls was spotted sitting alone at the desk when the program returned following a commercial break. He then revealed that Susanna had left the studio to console Ms. Davis.

Levi, a former Bath rugby player, went missing on October 29 after leaving a buddy in Ibiza to take a ship to Barcelona by himself. Since leaving the Old Irish Pub on the city’s busy La Rambla, the Celebrity X Factor competitor has not been spotted.

At 10:05 pm, security cameras saw him exiting the bar where he had consumed a pint while watching football. He walked the short distance north to the Hard Rock Cafe, where the route had become inactive

In the nearly three months that he has been gone, Levi has not used his phone or either of his two bank accounts, according to the police.

There have been no credible sightings of him, and his passport was discovered by authorities in November, so he is unable to travel, rent housing, or book a hotel room.

It was disclosed today that his family has hired private investigators to investigate a £100,000 debt Levi is said to have owed to a Somali gang.

An alleged insider from the investigating team led by Gavin Burrows told the Spanish daily La Vanguardia: ‘Davis was in a precarious situation. He believed they were after him.

In fact, he believed they attempted to poison him on one occasion.

Ms. Davis (pictured) stated on GMB this morning that potentially crucial CCTV footage had been erased by the time Spanish courts allowed investigators permission to see it, while the ‘linguistic barrier’ created delays in collecting case-related material.

Levi’s mother Julie Davis (shown with a photo of herself and her son) is encouraging authorities in Barcelona to investigate the water near the city’s port after a guy was spotted floating in the ocean just hours after her son went missing.

Mr. Davis took a ship from Ibiza to Barcelona, where he disappeared.

On the day he vanished, Levi had only been in Barcelona for three hours, having arrived at the ferry dock at 7pm after an eight-hour voyage from Ibiza, where he had been on vacation with friends.

Mr. Davis visited the Old Irish Pub for only 35 minutes. The last time his phone signal was picked up was at the city’s Sants mainline train station overnight on October 29. This location is little over three miles from the pub.

A guy was spotted floating in the water just hours after her son’s disappearance, prompting Ms. Davis to request that police in Barcelona search the water near the city’s port.

The crew of an Italian cruise ship spotted a person in the water at 6:30 a.m. the morning after Levi was last seen and threw a life ring into the water to assist them.

Today, a growingly anxious Ms. Davis reported that nobody had been found.

Levi, who also appeared on Celebrity X-Factor, was spotted exiting an Irish pub on La Rambla near Barcelona’s harbor.

Former Bath rugby player Levi, 24, went missing on October 29 after leaving a buddy in Ibiza to take the ferry to Barcelona by himself (seen in September 2019).

In an attempt to locate Levi Davis, missing posters have been posted all throughout Barcelona.

Three weeks after her kid was reported missing, Ms. Davis told MailOnline that her son’s passport was located in the port.

She now requests that police bring in dive teams to scour the seafloor off the coast of the capital of Catalonia to determine whether her son’s body is there.

Ms. Davis stated, “At 6.30 a.m. on October 30, the cruise ship Bellissima reported a person in the water as it entered the port of Barcelona.”

The ship reported to the Civil Guard that a passenger or crew member had fallen overboard, but a subsequent review of the ship’s cameras and sensors did not detect anyone falling into the ocean.

‘Several boats and a helicopter were despatched to search for the missing individual, but no one was found and the search was eventually called off. The life buoy that had been put into the water for the individual to cling to eventually washed ashore.

The night before, Levi had been drinking in a bar on La Rambla, Barcelona’s main street near to the port. A few weeks later, it was discovered at the harbor.

“Although there was no description of the person in the water, we urge the police to send in divers to ensure that there is no undiscovered body beneath the surface.”

At that time of year, it would still be pretty dark at 6:30 a.m., and because it is a busy shipping route, people do not swim there.

Levi’s family does not believe he traveled to Barcelona with the intention of self-harm, and they worry he may have been tossed into the water by another individual.

MailOnline disclosed that a private investigator assisting police in their hunt had been contacted by an unknown source two weeks prior, claiming that London criminals may be responsible for his disappearance.

Ms. Davis continued, “Levi sent me a video message from the pub where he was last seen, and he appeared to be in excellent spirits.

If that was him in the water, I don’t believe he put himself there on purpose. I feel someone else may be accountable.

‘Two years ago, when he played for Ealing Trailfinders, he had a run-in with some bad individuals in London, and it has been suspected that London gang members may be behind his disappearance.

As a mother, I only desire my son’s return. Not knowing what happened to him is the most difficult thing to bear.’

New photographs of Levi, taken just one week before his abduction, have emerged. They are considered to be his last known images before he vanished.

The photographs were taken by his photographer friend Adetodkunbo Adetona to accompany the November release of Levi’s second single, Los Angeles.

Mr Adetona, from Hammersmith, London, today said: ‘They were taken in Ibiza on the 20th, about a week before he disappeared. He asked me to take photos for his upcoming single.

New images of Levi have emerged (shown) which were shot just a week before his abduction. They are considered to be his last known images before he vanished.

The last known photos of Levi (pictured) were captured by his photographer friend Adetodkunbo Adetona, to go with Levi’s second music single – Los Angeles – which was due to be released in November

‘I met him when he released his debut song because I took the press pictures for it. We became friends, and he asked me to come and do this shot.

‘So I got on an airplane – I was only there for approximately five days.’

Julie, the mother of Levi, had stated that he was contemplating abandoning rugby after suffering a ligament injury and was dealing with mental health concerns two weeks prior to his disappearance.

Mr. Adetona, however, stated, “While I was there, he was OK. He was in excellent health. His second single was about to be released, and he felt optimistic about the future.

‘He had underlying issues – I mean, who doesn’t after a pandemic? However, he was training, healing from a knee injury, and becoming extremely ripped.

‘He was learning Spanish and how to DJ, and I believe he had stopped drinking. He seemed wonderful.

I don’t believe he planned his vacation to Barcelona because he didn’t mention it. I just had a FaceTime call from him when he was on a ferry; I assumed he was headed to a nearby island. In Ibiza, using a ferry is routine.

‘I thought it was weird that he was alone, but he’s a boy, he’s 24 years old, and he wasn’t doing anything I wouldn’t do. There was nothing extraordinary about it. During the session, we simply conversed about lighthearted topics, the sort of things you say to make someone shine. We then ate lunch.

He was optimistic towards the future. I only knew him briefly, but we were quite close. Knowing these may be the last photographs taken of him before he disappeared is horrifying. It’s distressing.

‘I lost another friend to a heart attack over the holiday season, but at least I was able to say goodbye. With Levi…things are dreadful.’