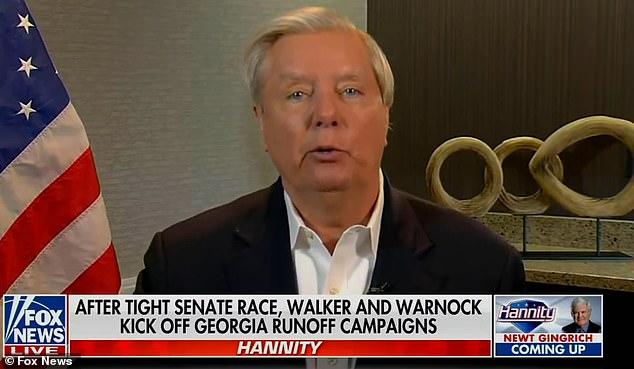 US Senator Lindsey Graham stated that leftists are attempting to ‘kill’ Georgia Senate candidate Herschel Walker to prevent people of color from joining the Republican Party.

The rematch between Walker and the current Democratic senator, Raphael Warnock, is slated for December.

As both parties vie for control of the Senate, the contest is one of the most watched in the country, with Walker’s personal life making headlines after two women accused him of forcing them to get abortions.

Graham of South Carolina became upset as he asserted that Democrats were trying all in their power to dig up dirt on Walker and ensure he loses because of what he stands for.

Graham told Fox’s Sean Hannity on Thursday evening, “They are attempting to kill Herschel to discourage young men and women of color from being Republicans.”

“They’re attempting to destroy Herschel to dissuade men and women of color from joining the Republican Party,” alleges Lindsey Graham, who eventually reaches the verge of tears. pic.twitter.com/feNlNIQpzk

US Senator Lindsey Graham (above) asserted that leftists were ‘trying to destroy’ Herschel Walker because he represents a’movement’ of people of color joining the Republican Party.

Graham stated that Democrats are trying to destroy the life of the former collegiate football star after two women accused Walker of forcing them to get abortions. Walker is pictured campaigning in Georgia as his election heads into a December runoff.

Senator from South Carolina became upset when urging Georgians to vote for Walker.

Georgia, Arizona, and Nevada remain as the only uncalled Senate races. The outcome of the races will determine which party will control the United States Senate.

Graham asserted that Walker’s campaign was so crucial that he was willing to relocate to Georgia in order to assist his fellow Republican in winning the election.

He ultimately labeled Walker, a former collegiate football star who won the Heisman Trophy, as a “nightmare for liberals.”

Graham’s voice trembled as he told Hannity, “If Herschel wins, he will encourage people of color all over Georgia to join Republicans, and I repeat all over the United States,” if he wins.

During this time, Herschel was campaigning in Canton alongside Senator Ted Cruz, who urged Georgians to vote for the Republican candidate in December.

Cruz stated, “I want to inform the men and women of Georgia that the eyes of the nation are on you.” There is a strong likelihood that Georgians will determine who controls the Senate.

Cruz was the first prominent Republican to visit the swing state within two days of Election Night.

Georgia is anticipated to be the important state in determining which party controls the Senate, hence the Republican Party is likely to campaign vigorously there.

Graham referred to Walker (above with supporters) as a “nightmare” for liberals attempting to combat a purported flood of people of color driven to join the Republican Party.

Sen. Ted Cruz of Texas joined Walker on the campaign trail in Georgia on Thursday night after learning that the election would go to a runoff.

Cruz pleaded with Georgians to vote for Walker (pictured)

On Wednesday, the Republicans inched closer to a majority in the House, while the Senate race relied on the outcomes in Arizona, Nevada, and Georgia.

Due to the sluggish vote counting in the West and the Democrats’ unexpectedly strong performance in numerous difficult House districts, the composition of the next Congress may not become evident until the following week.

Republicans are within nine House seats of the 218 required to win, with several West Coast elections still being tabulated, two days after Americans went to the polls.

Republicans inched closer to a majority came the House, while Arizona, Nevada, and Georgia will determine who controls the Senate. To take the House majority, Republicans need 218 votes.

Democrats or Republicans could take control of the Senate if they win two of the three remaining races.

Next month, though, there is a significant potential that, for the second time in two years, the Senate majority will hinge on a runoff election in Georgia.

Neither Warnock nor Walker received the required fifty percent of the vote to be declared the winner.

In Arizona, Democratic Senator Mark Kelly has a five-point lead over Republican Blake Masters, according to the Secretary of State’s office, but the race may still go any way as more than 600,000 votes remain to be counted and Kelly’s lead has surpassed 100,000 votes.