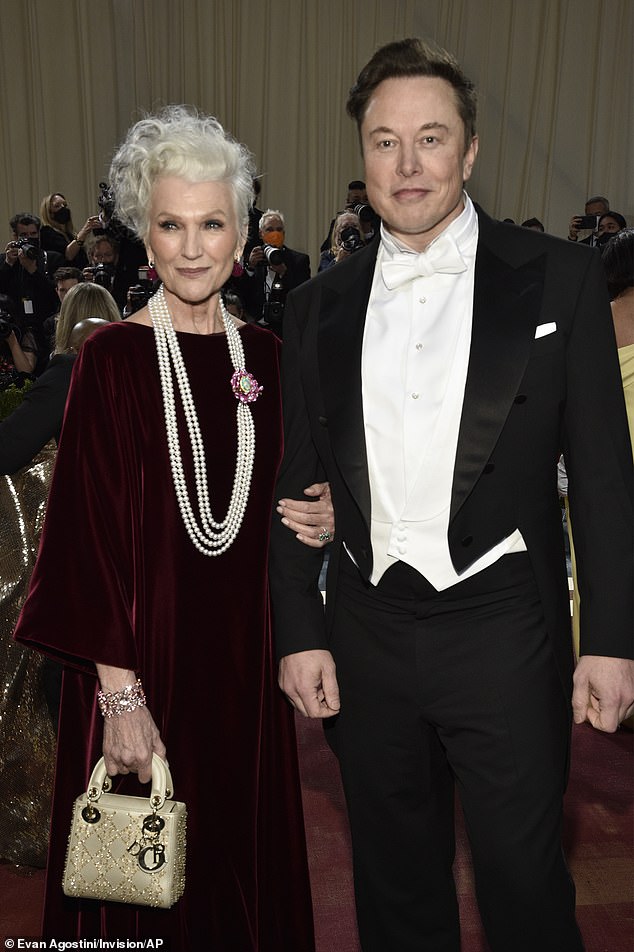 Elon Musk has stepped out for the first time since sealing his $44 billion deal to buy Twitter last week, accompanying his mother Maye on the red carpet at the Met Gala.

Musk, 50, was asked by La La Anthony, interviewing guests as they arrive, about his plans for Twitter.

‘My goal, assuming everything gets done, is to make Twitter as inclusive as possible and to have as broad a swathe of people on Twitter as possible,’ he said.

‘And that it is entertaining and funny and they have as much fun as possible.’

He was also asked about his outfit for the event, which was staged with the theme Gilded Glamor.

His mother, 74, was wearing a crimson velvet Dior dress, with Chopard jewelry.

When Vogue tweeted the news of his arrival, the new Twitter owner replied: ‘How do you do?’

Maye Musk has been a working model since she was 15 in South Africa and continues to be in demand.

Both she and her son have attended the gala several times before.

Asked to describe her son, Maye said: ‘From the moment he could speak, he could discuss.’

In 2018, he used the event to make his relationship with singer Grimes ‘red carpet official’, wearing a white tuxedo jacket, with white script on the back which read ‘novus ordo seclorum,’ meaning ‘new world order’.

In 2021 the event was staged in September, rather than on its traditional May date, due to the pandemic.

Musk was asked on Monday night what he made of the soiree, and how it felt to be there.

‘It’s exciting to see all these looks.

‘And what we have here is the most talented people in style and fashion – and it’s the pinnacle of their work.

Hours before the gala began, it emerged that Musk is in talks with large investment firms and high net-worth individuals about taking on more financing for his $44 billion acquisition of Twitter and tying up less of his wealth in the deal, Reuters reported.

Musk is the world’s richest person, with Forbes estimating his net worth at about $245 billion.

Yet most of his wealth is tied up in the shares of Tesla, the electric car maker he leads.

The new financing, which could come in the form of preferred or common equity, could reduce the $21 billion cash contribution that Musk has committed to the deal as well as a margin loan he secured against his Tesla shares, the sources said.

Musk has also pledged some of his Tesla shares to banks to arrange a $12.5 billion margin loan to help fund the deal.

Investors have been fretting over whether Musk will complete the Twitter deal given that he has backtracked in the past.

In April, he decided at the last minute not to take up a seat on Twitter’s board.

In 2018, Musk tweeted that there was ‘funding secured’ for a $72 billion deal to take Tesla private but did not move ahead with an offer.

Twitter shares ended trading up 0.2% at $49.14 in New York on Monday, closer to the $54.20 per share acquisition price, as investors interpreted the news on the new financing discussions as making it slightly more likely that the deal will close.

Musk would have to pay a $1 billion termination fee to Twitter if he walked away, and the social media company could also sue him to complete the deal.

Musk, who calls himself a free speech absolutist, has criticized Twitter’s moderation policies.

He wants Twitter’s algorithm for prioritizing tweets to be public and objects to giving too much power on the service to corporations that advertise.