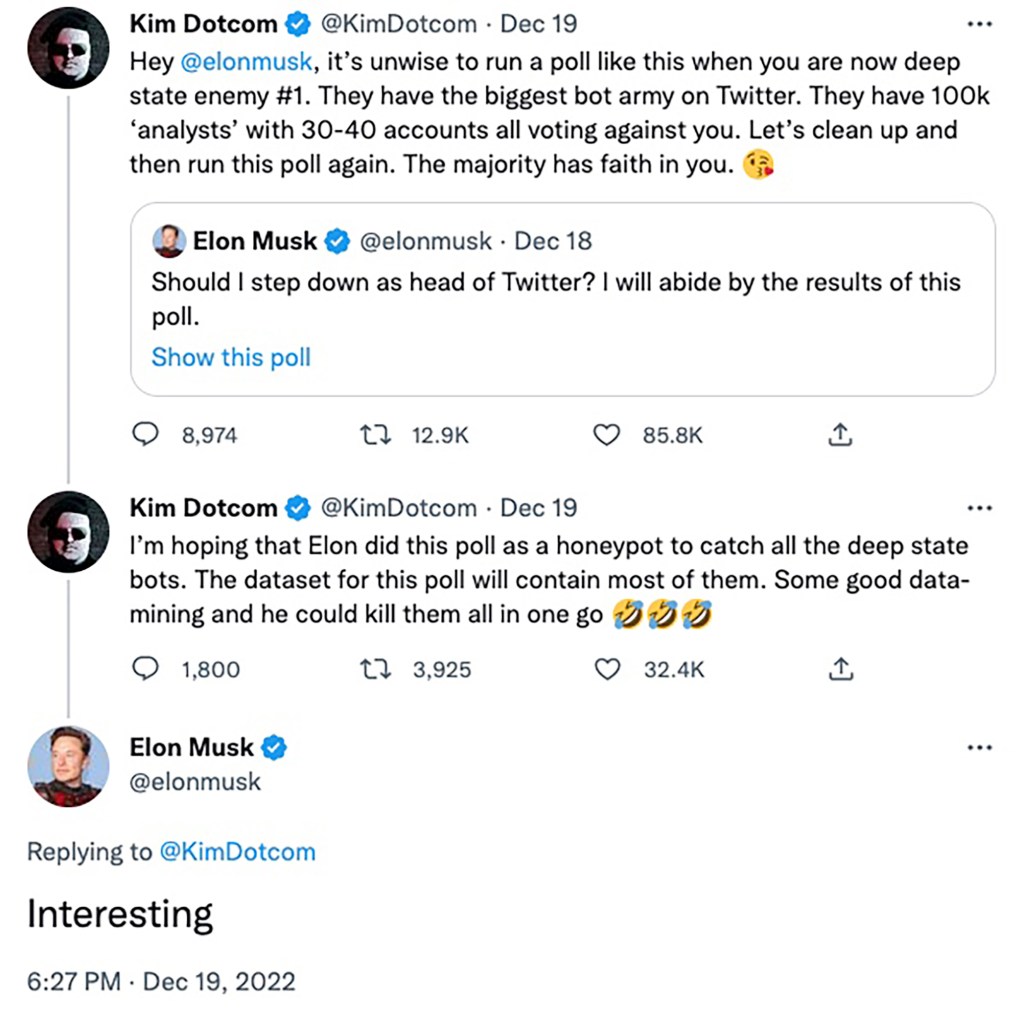 Elon Musk stated that he will only allow paying Twitter Blue subscribers to vote in future polls about how his $44 billion social media company is run, speculating that a “bot army” may have been responsible for the results of a poll asking for his resignation.

Musk, 51, had yet to openly address the vote asking on him to “stand down as CEO of Twitter” more than 24 hours after the poll closed early Monday morning, despite his earlier pledge to “abide by the results of this poll.”

However, he responded to a number of tweets claiming that the result was unfairly influenced by bots by calling the hypothesis “interesting.”

Kim Dotcom, a renowned internet entrepreneur, advised Musk that it was foolish to conduct such a poll given that he is now the number one opponent of the deep state.

He wrote, “They have the largest bot army on Twitter.”

Elon deemed the “bot army” notion of the deep state to be “interesting.”

Dotcom tweeted, “Let’s tidy up and then run this poll again,” adding that he hoped the poll was “a honeypot to catch all the deep state bots” and “kill them all at once.”

Musk replied, “Interesting,” the same reaction he provided when someone else inquired, “Did bots dominate yesterday’s Elon poll?”

The Tesla magnate later agreed to a policy adjustment when a user suggested that “only blue subscribers should be able to vote in policy-related surveys.” We have actual skin in the game.”

When a Twitter user argued that only blue subscribers should be able to vote in policy-related polls, Musk responded, “Twitter will make that modification.”

The Twitter Blue subscription, which costs $8 per month for the key verification checkmark, was one of the actions that infuriated some users following Musk’s late-October acquisition of the network.

Musk did not hint that his vow to abide by the verdict will be challenged due to his concern concerning robots. More than 17.5 million users voted, with 57.5% requesting his resignation.

Musk has not yet responded directly to the poll calling for his resignation, which he had committed to abide by.

His silence meant that it was not immediately clear when he would stand down, as his assertion that “there is no successor” may delay his departure.