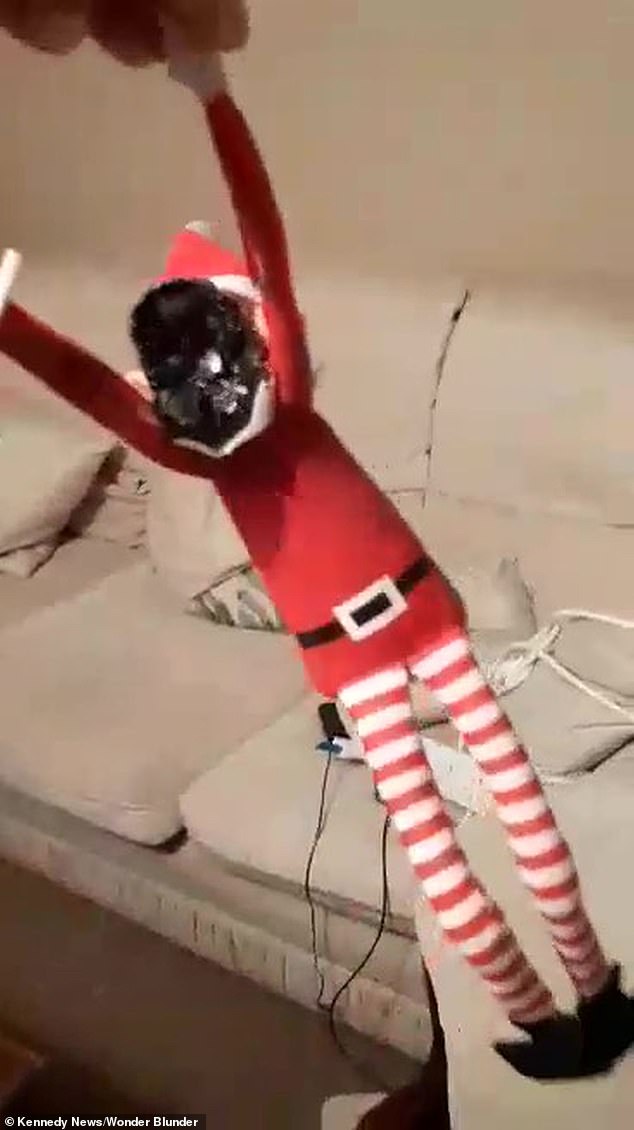 After the mother realized the burning scent was coming from her son’s “cremated” doll, whose whole face had melted off, an Elf on the Shelf almost started a fire in the family’s house.

The elf, who looked impish, had just been presented to Charlie Oliver, Max Oliver’s five-year-old son, when there was an immediate burning scent.

Her partner hurried upstairs screaming that something was on fire as the bitter scent of burned plastic filled the whole home.

Max, a stay-at-home mother, caught sight of cheeky Buddy’s stripy stockings hanging from their overhead light as the exhausted pair rummaged about downstairs checking their plug outlets for an electrical malfunction.

After hastily removing the toy from the very hot lightbulb where it had been sitting all day, Max, 27, burst into loud laughter after seeing its burnt face and fully caved-in skull.

After replacing it with a new one, she has now admitted that the deformed elf has been relegated to their kitchen cupboard for the last two years in order to prevent “scarring her kid for life.”

“It wasn’t just melted; it was incinerated, and it was black,” remarked Max, a resident of Cornwall. I was in fits of laughter and felt it was really absurd.

“My boyfriend was a little concerned that there was a fire in the home before he realized how absurd it was. It was one of those hilarious situations, and we were both wrinkled.

At the time, I laughed a lot harder than he did.

It truly occurred when we initially brought home an Elf on the Shelf. We decided to try it out after seeing it around.

Every day we took turns, so one day it was me and the next it was him.

I asked him to transfer the elf for me on this particular day since I had forgotten to do it, and he responded that he knew precisely the location.

“He went and concealed it, and we paid it no mind.” After fifteen minutes, he rushed upstairs and said, “Something’s on fire, I can smell smoke.”

We were smelling each electrical socket in the home, Max said, adding that it was amusing.

I didn’t notice the stench of the plug socket until I was downstairs in the front room and knelt down.

I saw these little legs hanging from the lightbulb as I glanced up.

The elf’s arm was still attached to the ceiling light when Max sprang up to grasp it. She then showed her horrified companion the elf’s eerie visage.

“I knew it was the elf that had melted instantaneously, but I didn’t expect it would have melted so severely,” Max added.

The light bulb was actually off, so the heat from it and the fact that it had been on all day were the only contributing factors.

He was unaware that it was hot since the light was off. The elf had wrapped the light bulb in velcro since he had little velcro-equipped arms.

About two weeks before Christmas, we reasoned that we shouldn’t show him since doing so would permanently harm him.

“I had to assist Santa at the toy store – I’ll be back in a few of days,” the elf said in a letter that was placed under the sink.

Max immediately went looking for a new elf, but because Christmas was just a week away, no place still had any.

After searching many places, she was able to locate the last one at The Range, although it “looked a little worse for wear coated with glitter.”

The elf was left with a letter that said, “Thank you, had to assist Santa Claus, but I’m back now,” beneath the Christmas tree. Here is a tasty. I appreciate your patience.

The other elf thought it was a bit strange, but Charlie didn’t seem to notice.

Two years later, Max has finally been given permission to share the hilarious gaffe online after Charlie’s stepdad initially “didn’t see the humorous side.”

My boyfriend didn’t immediately see the humor in it because he was concerned there could have been a fire and told me I couldn’t share it [online], Max said.

‘Since it’s Christmas, I begged him to publish it this year, and he agreed.

“The elf is still beneath the sink,” she said. It has remained there.

We will now keep it in the home forever and I’m placing it in a memory box.