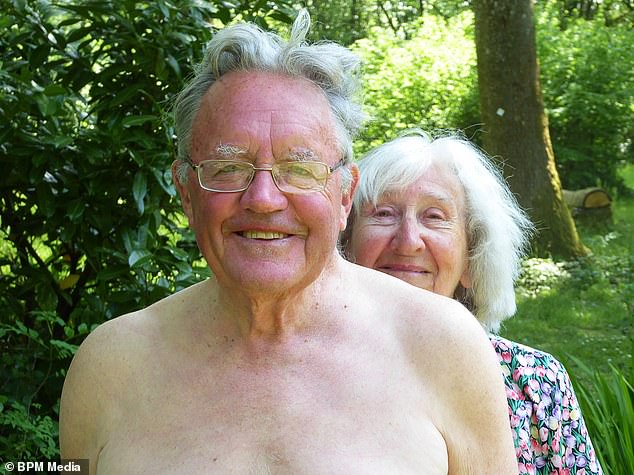 A 86-year-old naturist from South Derbyshire is hoping to rent a garden for a few hours per week so he can undress in privacy, as the 100-mile trek to his preferred nudist resort has become too far.

Stuart Haywood, from Midway, just began removing his clothing in 2008, at the age of 72, after being naked in front of his wife for more than 50 years.

Although his 91-year-old wife Rhona has not joined him in his habit, he enjoys being surrounded by other naturists.

In 2008, the retired accountant and greengrocer began stripping for the first time while attending a life sketching workshop in Swadlincote.

Upon seeing the model, he said to himself, “I can accomplish that,” and he has never looked back.

Since then, Mr. and Mrs. Haywood have spent two weeks a year at Lakeside Farm Naturist Holidays near Skegness, Lincolnshire.

86-year-old Stuart Haywood discovered his pastime in 2008, at the age of 72. Pictured with his 91-year-old wife Rhonda

The couple has been to a naturist resort in Skegness on a regular basis, but now claims the trip is too exhausting.

Even their wedding vows were renewed there. Mr. Haywood stated that even the vicar was naked during the service.

He stated how he feels when pursuing his nudist passion: “I feel energized when I remove my clothes.” It is a feeling of liberty. It is never too late to be naked.

However, the couple now finds the journey to Skegness to be “arduous” and would prefer to remain closer to home.

His own garden is unsuitable for his interest as he can be seen by others.

He stated that he hopes to utilize someone else’s, for which he will pay a fee and provide gardening advice.

He stated, “Rhona and I will not be returning to Lakeside Naturist resort this year with deep disappointment.

Mr. Haywood is looking for a remote garden to pursue his pastime in privacy, as his own is visible from neighboring homes.

“Both of us find traveling and preparation to be very burdensome. We are 91 and 86 years old, respectively.

“Rhona is not a nudist, but I would like to find someone with a private garden who would let me use it for a few hours every week so I may pursue my hobby.”

“In exchange, I am willing to impart my expertise of horticulture, roses in particular, as well as local history, sports history, and anything else that the garden owners may find fascinating.

We may be able to reach an agreement regarding financial costs.

Mr. Haywood stated that he is never naked at home: ‘We live in a bungalow surrounded by homes and with a pathway just outside our window.

‘Since our garden is also surrounded by houses, I believe that my enjoyment at Lakeside is merely enhanced.

When I remove my clothes, I have a mood boost. It is a feeling of liberty. You should never be ashamed of your body and are never too old to be naked.

He added that he would never intentionally offend those who do not share his passion for nudism.