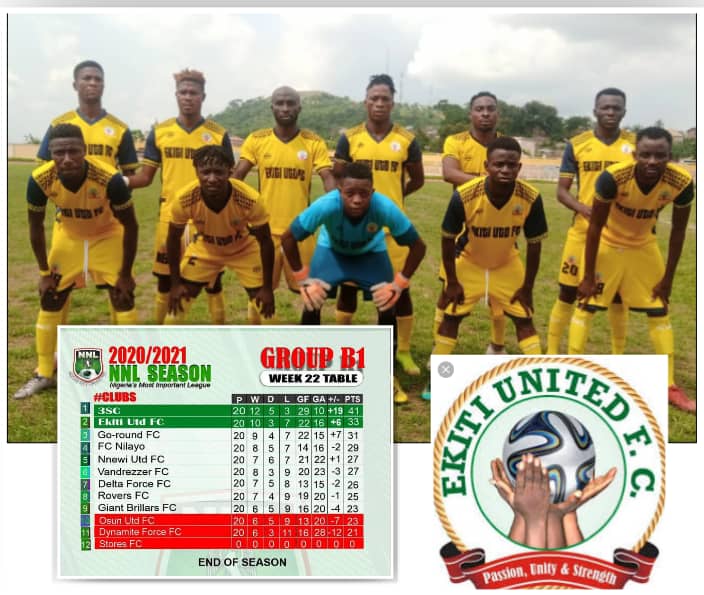 The Government of Ekiti State is pleased to announce that Ekiti United has qualified for the play-off in the Nigeria National League (NNL) for the first time, having spent the last ten years in the country’s second tier football league.

Ekiti United FC, under the guidance of coach Samson Omiponle, defeated visiting Dynamite Force FC of Iyahmo, Edo State 2-1 in the final match which capped the regular season in group B1, Southern Conference of the NNL.

The Captain of the National Beach Football side (Super Sand Eagles), Isiaka Olawale and rising striker, Kamoru Adebari scored the goals that sealed the historic feat for Ekiti United at the Oluyemi Kayode Stadium, Ado–Ekiti
The win means Ekiti United FC finished second in the league with a total of 33 points. The league leader, Shooting Stars Sports (3SC) of Ibadan m made a total of 41 points. Ekiti United and 3SC join Gombe United, Elkanemi Warriors, Niger Tornadoes, and DMD in the list of teams that qualified for the planned NNL Super Eight playoff.

Ekiti United FC is government owned and was established in 2013 as Fountain Football Club during the first tenure of Governor Kayode Fayemi’s administration.

The state government congratulates the players and staff for this historic achievement, and their unwavering passion, dedication and commitment throughout the season. We remain committed to working with critical stakeholders to increase investments in sporting management and facility in the state.