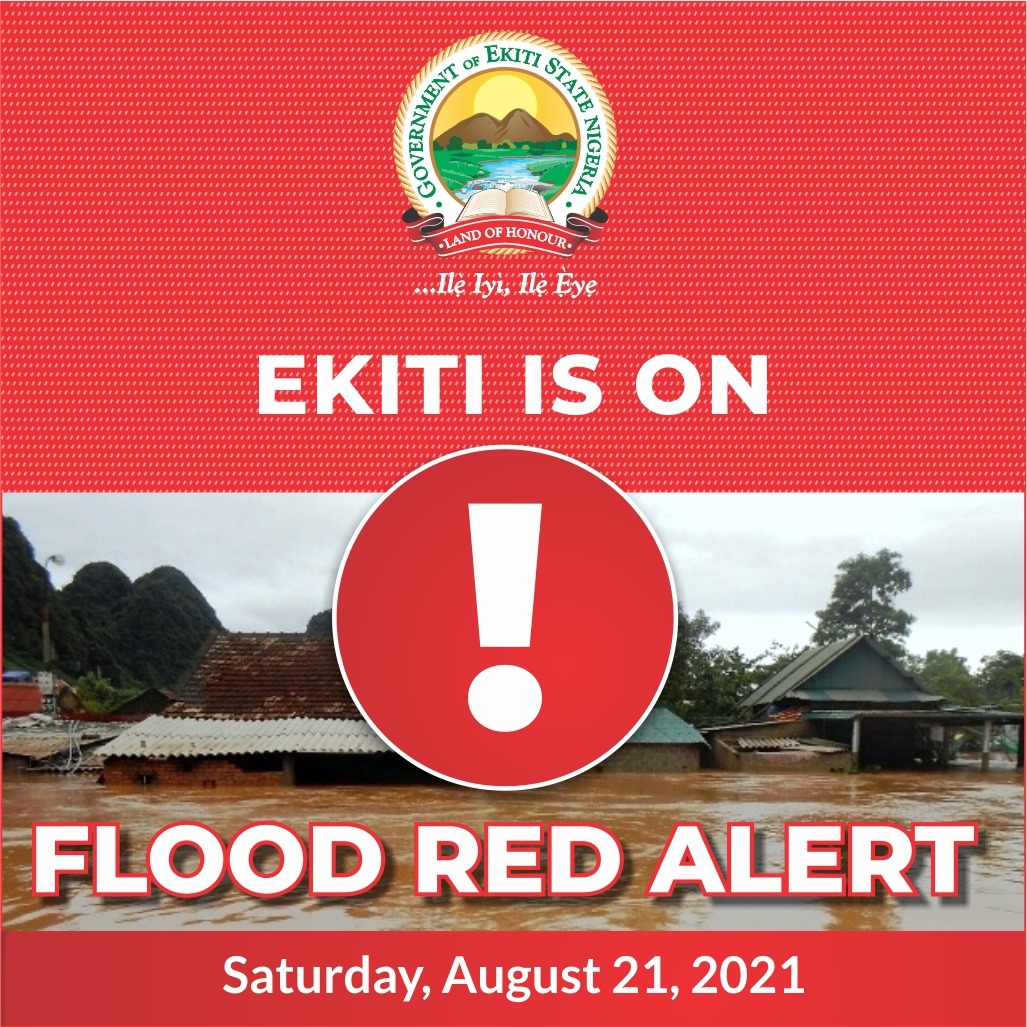 This release is an update on the issue of flooding and heavy rain as it concerns the state. The Government of Ekiti State is duty bound to inform the general public that the Federal Government has placed its response agencies on red alert in flood-prone areas of the state to forestall disaster.

Relevant federal and state government entities are being mobilised to mitigate disaster in the state, including the Federal Fire Services, the Nigeria Security and Civil Defense Corps (NSCDC), the Federal Road Safety Corps (FRSC), Ekiti State Ministry of Environment and Natural Resources and the Ekiti State Environmental Protection Agency among others.

This development was in response to the flood prediction by the Nigerian Meteorological Agency (NIMET) and the torrential rainfall and its effect on some parts of Ekiti state which could have negative impact on lives and property in various communities.

According to the Director-General of the National Emergency Management Agency (NEMA), Alhaji Habib Mustapha Ahmed, “NIMET has predicted that climate change will lead to abnormal rainfall which will culminate to flood disasters in 28 states of the federation and many local councils will be affected. The NIHA, the management of the dam predicted on May 6, 2021, in their annual flood outlook that 28 states and 121 local councils will experience flood disasters.” “All hands must be put on deck to mitigate the occurrence of flood disasters that may likely occur between September and October 2021”, he added.

Governor Kayode Fayemi’s administration has also taken proactive steps to address the issue of flooding in the state by purchasing and deploying two amphibious excavators for flood control, dredging of selected rivers and streams, as well as the widening of canals for free flow of water. Efforts are ongoing to begin the reconstruction of the Ogbomu bridge which is located between Irele and Ponyan in Kogi State, Ajolagun bridge, and drainages and culverts at Arinkin in Oke Ako and Ajolagun in Ikere-Ekiti.

The state government under the supervision of its Ministry of Environment and Natural Resources is undertaking erosion control works at Bisi Aloba avenue and Temidire road in Ikere-Ekiti. In Ado Ekiti, efforts are ongoing to address the flooding issues at Tinuola axis, Eminrin, Afao Road, Ajilosun, and Odo Ado, as well as Owode and Otete in Efon Alaaye.

The public is urged to collaborate with government in addressing the issue of flooding by keeping drainages clean and desisting from dumping refuse in water channels to allow free flow of water.