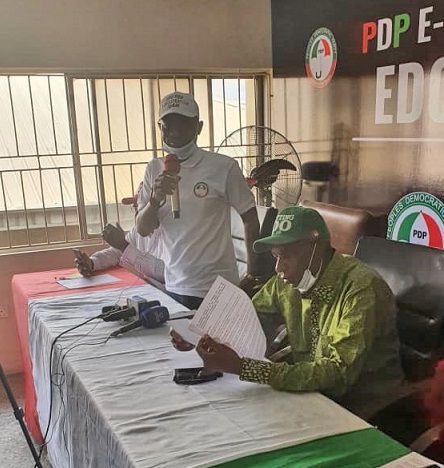 The Edo State chapter of the Peoples Democratic Party (PDP), on Monday, commenced its e-registration exercise for membership drive, with a target to register one million members for the party in the state.

Speaking at the flag-off of the nationwide exercise, at the state party secretariat in Benin City, Chairman of the Edo State e-registration committee, Rt. Hon. Kabiru Adjoto, expressed optimism that with the cooperation of party members, stakeholders and leaders, the exercise would be successful.

According to him, “the committee’s target is to register one million members for the PDP in the state. We are also setting up e-registration Technical Academy in each Senatorial District, where agents will be receiving adequate training throughout the period of this exercise.

“The exercise will be leadership-driven; party leaders are encouraged to help deepen awareness creation through diverse publicity mechanisms such as sponsorship of jingles on television and radio, as well as banners which may even bear the image of the sponsor.”

Adjoto added, “Party leaders are also at liberty to recommend individuals to us who they wish to sponsor as ward field agents for the exercise, details of such persons should be forwarded to Edo PDP e-registration Help Desk Centre, located at No. 59, Airport Road, Benin-City.”


He further stated that the party had “put all modalities in place to ensure that the exercise is all-inclusive, across various categories of party members and intending members.”

On his part, Edo State PDP Chairman, Dr. Anthony Aziegbemi, urged members and intending members to turn up for the exercise, noting that with Governor Godwin Obaseki as national chairman of the e-registration committee, the state could not afford to fail in ensuring the success of the exercise.