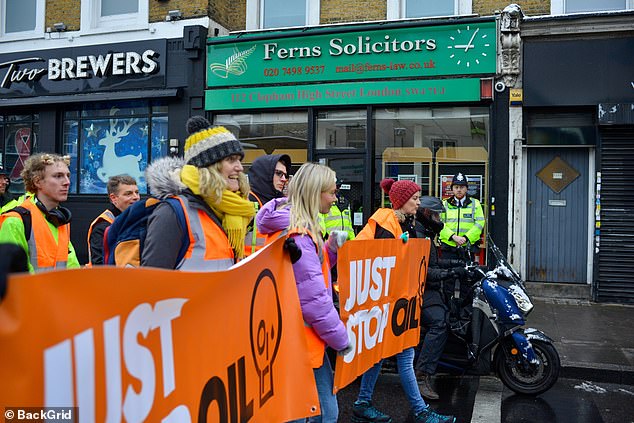 Twenty protesters crossed the A24 at Clapham South at 8:15 a.m. and proceeded up Clapham High Street “to demand that the government halts all new fossil fuel licences and consents,” and later this morning, they would go to Camden Town in north London.

The organization said in a tweet that the government will introduce new regulations before Christmas to “address loopholes” that let Just Stop Oil supporters to march in the street, supporting the belief that the only demonstrations the government would tolerate are those that no one observes.

It happens at a time when Brits are already experiencing travel mayhem due to overnight ice conditions caused by heavy snowfall, which trapped many cars in lengthy lines.

Not only are new fossil fuel licenses being granted, but a new coal mine has also received approval, producing the worst fuel possible, virtually all of which will be exported.

This reveals the enormous discrepancy between what government officials say and practice.

“Greenlighting a new coal mine implies that our Government does not care about regular people or democracy,” a spokeswoman for Just Stop Oil further said. Their endorsement and encouragement of more coal, oil, and gas is part of a scheme to undermine our liberties, rights, and the rule of law.

It is a strategy that will kill untold numbers of people and leave many more unsure of whether they should leave the places they have called home for centuries or not.

“The true cruelty sinks in when you realize that the majority of people in this nation and throughout the globe support the “no new fossil fuels” position that Just Stop Oil is advocating.”

Government is suppressing dissent by imprisoning regular citizens, demanding a stop to new oil and gas development, passing new laws, and taking away your ability to cross a public street. You cannot encourage opposition overseas while calling for oppressive measures at home.

The time to stand by is gone; we must resist or lose everything, therefore we beg that you join us.

After snow and ice caused chaos on the whole southeastern railway network and caused delays on the London Underground, commuters were urged to remain at home.

In several parts of the UK, there are yellow weather warnings for snow, ice, and fog. In eastern and south-east England, an ice warning is in effect until Tuesday morning at 11 a.m.