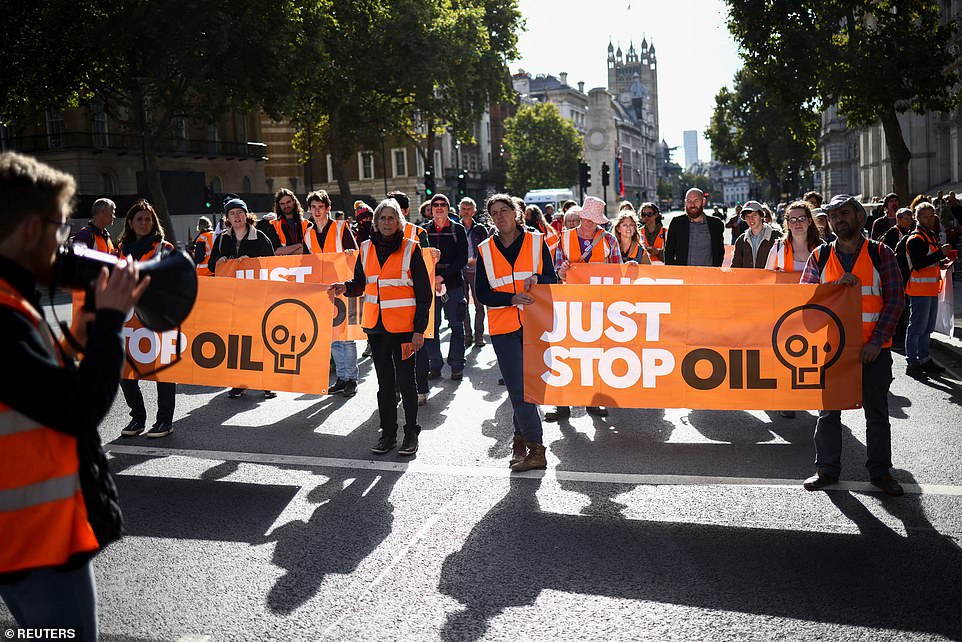 Met Police officials yesterday accused eco-fanatics of creating “unreasonable disturbance” to people’s lives over the course of the weekend in central London.

The police force said that because of the eco-warriors’ weekend roadblocks in the capital as part of a month-long climate demonstration, it was necessary to implement a “major” enforcement operation.

After two demonstrations in which milk was spilled on the store floors of upscale department stores Fortnum & Mason and Selfridges, others in the city center splattered paint over shops and restaurants.

The militant campaign organization Just Stop Oil has recently disclosed that over 100 demonstrators were detained by the Metropolitan Police throughout the course of Saturday and Sunday.

As part of their “Occupy Westminster” call to action, the eco-fanatics are calling followers to demonstrate throughout the month of October in favor of their demand that the government suspend all new oil and gas projects.

However, Friday night, Met officials turned their attention to the group, claiming that by their acts, they had caused “unreasonable disturbance” to people’s lives.

‘This weekend we observed repeated attempts to inflict damage to businesses and to unduly disturb the lives of regular Londoners by obstructing roads,’ said Superintendent Chris Green, who oversaw the police operation.

“A substantial police operation is needed to address these concerns.” In addition to the police required to process inmates and conduct investigations, it takes a lot of officers on the ground in strategic areas to convert arrests into charges and, eventually, results in court.

We strongly welcome peaceful protest and will always cooperate with organizers to ensure that demonstrations may take place safely, but the public has a right to expect us to act quickly and decisively when protests cross the line into crime.

“We have identified perpetrators, stopped additional incidences of criminal damage, and kept disruption in central London to a minimal thanks to the dynamic and efficient reaction of the devoted men and women who were on duty over the previous two days,” the statement said.

It comes after on Sunday, members of the environmental organization were seen being dragged off the roads around Westminster by enraged drivers.

In an effort to pressure the government to act on the climate problem, dozens of protestors yesterday stopped roads in downtown London near the Houses of Parliament.

One was shown on camera climbing up the side of a police truck that had come to deal with the demonstrators and attaching himself to it by the hand.

However, several drivers were irritated by the demonstrations. And they tried to remove the demonstrators off the highways by force, taking things into their own hands.

Two ladies who were detained during the demonstrations for spray painting a storefront are scheduled to appear in court tomorrow, according to Just Stop Oil.

Online video also shows a white vehicle speeding right towards the demonstrators before slamming on the brakes and halting just a few centimeters in front of them.

Protesters were forcibly shoved, pushed, and dragged toward the pavement by this motorist and others.

A motorist can be heard shouting in one YouTube video, “I have to go to the hospital… stop messing with us!”

Roadblocks will continue to occur for the remainder of the month, according to the protesters, who carried many placards and were all clad in orange jackets.

One day after taking 24 individuals into prison for producing similar scenes in Marylebone Road, the Metropolitan Police reports that 45 people were taken into custody for deliberate obstruction of the roadway in Piccadilly yesterday.

On Saturday, vegans joined the eco-fanatics in creating further scenes of havoc by painting storefronts and spilling milk all over the streets.

A guy who was seen on camera leaping into a police vehicle been arrested, according to a tweet from the Met: A guy may be seen rushing and climbing onto the top of a police truck near Piccadilly Circus in a video that was uploaded early this afternoon, according to the latest information.

“He was hauled down by highly trained cops and has now been taken into custody for criminal trespass and obstruction.”

According to Just Stop Oil, one protester required “emergency” medical attention after being forcibly pulled off the road by a driver yesterday.

The organization said in a statement, “We are not giving up.

The ninth day of the occupation of Westminster has begun. Numerous bridges and important A highways have been repeatedly stopped, causing severe disruption across the municipality.

Yesterday, a number of Just Stop Oil supporters refused to use violence in the face of the understandably irate bystanders.

One supporter needed immediate medical attention after being pulled off the road by a bystander.

When the government declares that it will cease all upcoming licences and consents for the exploration, development, and production of fossil fuels in the UK, “the disruption will come to an end.”

With a banner reading “Just Stop Oil,” one demonstrator allegedly attached himself to the roof of a police barricade. He said to onlookers, “I’m furious.” Where is the outcry, though?

‘A total of 45 individuals have been detained for intentional obstruction of the motorway following Just Stop Oil rallies in Piccadilly on Sunday, 9 October,’ according to a Metropolitan Police spokeswoman. They are now being held in jail.

Yesterday, when there was a lengthy line of angry-beeping automobiles, buses, and taxis, protestors wearing bright vests sat across Marylebone Road.

In connection with yesterday’s Just Stop Oil demonstrations, 24 people were taken into custody.

A guy who was seen being detained during the demonstrations said to the interviewer that he had just praised them for their bravery.

He claimed to the media that he lived “around the block” and had just come out to show the demonstrators his support. However, he soon found himself being held by police.

Some protesters glued themselves to the road during yesterday’s sit-in as part of the week-long action, continuing their demand that the government halt all new oil and gas projects.

Yesterday, Just Stop Oil collaborated with Extinction Rebellion’s Animal Rebellion to block off a significant portion of the capital.

As they marched through downtown London, members of environmental protest organizations dumped milk on Regent Street and St. James’s Street.

According to the organization, this is done to highlight the archaic traditions of hunting, shooting, and fishing while simultaneously demonstrating the viability of a better society.

Animal Rebellion stated its actions the day before illustrate the need for an urgent and immediate switch to a plant-based food system away from the existing one, which involves the ineffective and wasteful exploitation of nonhuman animals, even though there was no evidence of the organization yesterday.

They said that origami flowers had been used to cover the shop’s outside to symbolize the nature that would be restored and allowed to grow if we transitioned to a future based on plants and free of so-called “blood sports.”

A plant-based food system may feed more people while utilizing less space and less money, according to York resident Robert Gordon. Ranil Jayawardena and DEFRA should take strong action to help farmers in a transition to a plant-based future with a genuine and supportive subsidy system rather than keeping them in dependency on outmoded and ineffective subsidies.

It’s time for a government that supports farmers rather than abandoning them to fend for themselves.

Police also detained the vegan activists who yesterday splashed milk all over the ground at Selfridges and Fortnum & Mason.

Animal Rebellion, a group that calls itself a “mass movement employing non-violent civil disobedience to demand for an equitable, sustainable plant-based food system,” assembled hundreds of protesters at Green Park in London at 11 a.m. yesterday.

Sofia Fernandes Pontes from Madeira and Steve Bone from Essex, the pair who splashed milk over the two upscale London department shops in a protest against dairy products, were detained by police before leading a march into the heart of London.

The first of the climate group’s two demands is that the government assist local farming and fishing communities in abandoning the production of animals for food as part of an urgent and immediate transition to a plant-based food system.

Second, as part of a larger program of wildlife restoration and carbon drawdown, the group wants the government to commit to rewilding the freed-up land and ocean.

Yesterday, a spokesperson for the Metropolitan Police said: “A 40-year-old man and a 26-year-old woman were detained in Green Park on Saturday, October 8 on suspicion of theft and criminal mischief. They are being held in custody.

This relates to an incident that happened on Friday, October 7, at a business location in Piccadilly, London, W1A.

“On Saturday at 10:20 a.m., three people—a man, 26, and two women, 28, and 22,—were detained on suspicion of having items with the potential to cause criminal damage. Their detentions followed a proactive traffic stop in Berwick Street, W1, during which paint-filled fire extinguishers were discovered.

After blocking Westminster Bridge, 13 people were detained shortly after 18:00. Efforts were made to engage with the group and a number of people left voluntarily. Those who did not were arrested.’