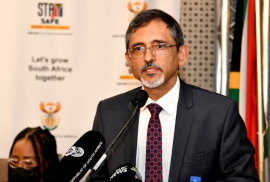 South Africa’s Minister of Trade, Industry, and Competition, Ebrahim Patel, says that international collaborations are essential for accelerating the ascent of African economies.

On Wednesday, the Minister spoke at the German-Africa Business Summit hosted at the Sandton Convention Centre in Johannesburg.

The meeting brings together corporate and government leaders from Germany and Africa in an effort to strengthen economic ties between the two regions.

Patel emphasised, however, that the continent needed “long-term partners” to help it as it evolves toward sustainable and green industrialization.

“It requires increased inward investment in productive sectors, particularly manufacturing and infrastructure; support for the transition [towards] green industrialisation; improved market access of goods and services, and [building] partnerships for skills, science, innovation and technology.

“Development can be fast tracked through new and smart partnerships. The growth, development and prosperity of nations [is] increasingly dependent on building… partnerships with other nations,” Patel said.

Patel said that the conference is essential for establishing strategic alliances that would propel African economies forward.

“The hosting of the fourth German-Africa Business Summit is an indication of the seriousness with which Germany sees Africa’s economic potential and the confidence it has in our economic prospects. It is an opportunity to discuss issues of mutual interest. That is the main objective of this summit — to build and sustain mutually beneficial partnerships between African nations and Germany.

“We see an opportunity to increase trade between… Germany and Africa. There has been some progress with deepening manufacturing exports to Germany, and we can build on the successes and be more ambitious,” he said.

“This will provide opportunities for German businesses to invest in the expanding African manufacturing sector. It will help in diversifying and de-risking Germany’s own global supply chains and sourcing markets.

“This is particularly important, given the experience of supply chain disruptions and vulnerabilities during the pandemic. An African industrialisation will also have the value and advantage of the transformation of minerals and other raw materials closer to source,” he said.

The Minister said Africa’s young and increasingly digitised population has a high ceiling for potential.

“To change that reality and address that gap… we recognise our role in promoting stability, rule of law and a conducive business environment underpinned by modern infrastructure and skills development.

“In the case for a number of countries including South Africa, it requires the expansion of reliable energy supply and improved transport logistics. It needs a capable public sectors and a relentless fight against crime,” he said.