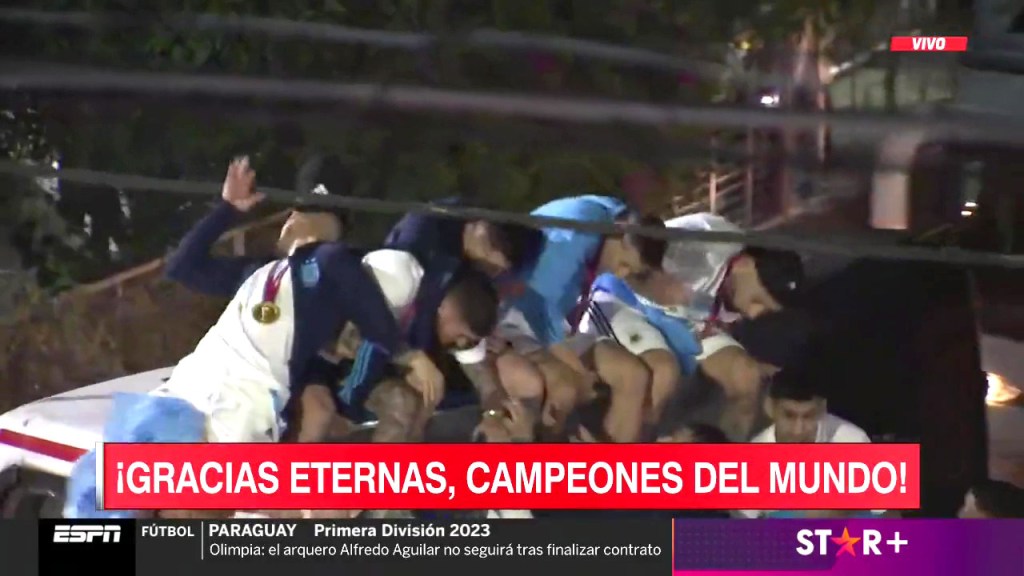 That was a narrow escape.

On Tuesday in Buenos Aires, a low-hanging power wire nearly knocked Lionel Messi and four of his teammates off of a moving open-top bus during Argentina’s 2022 World Cup celebrations.

Messi, Leandro Paredes, Angel Di Maria, Rodrigo De Paul, and Nicolas Otamendi can be seen sitting on the roof of a bus during the team’s World Cup winning parade. De Paul saw the cable and warned his colleagues to duck. The five players made it under the power line with few seconds to spare as the squad bus continued down the ceremonial route.

However, Paredes’ hat was left behind after it was knocked off his head by the power line. The incident occurred as Argentina traveled through the streets around 2 a.m. when fans celebrated the team’s World Cup victory against France.

The televised celebration parade announcer may be heard exclaiming, “What a moment! “Be vigilant, lads!”

According to the Telegraph, more than a million fans are expected to join Argentina’s World Cup parade following Sunday’s dramatic 4-2 penalty shootout victory over France.

During their World Cup parade in Buenos Aires on December 20, 2022, Argentina players climb atop a bus while ducking under a low-hanging power line.

During their World Cup parade in Buenos Aires on December 20, 2022, Argentina players climb atop a bus while ducking under a low-hanging power line.

Tuesday was apparently proclaimed a bank holiday in Argentina so that fans could attend the celebration.

»During the World Cup parade, a power line nearly takes out Lionel Messi and Argentina’s other players«