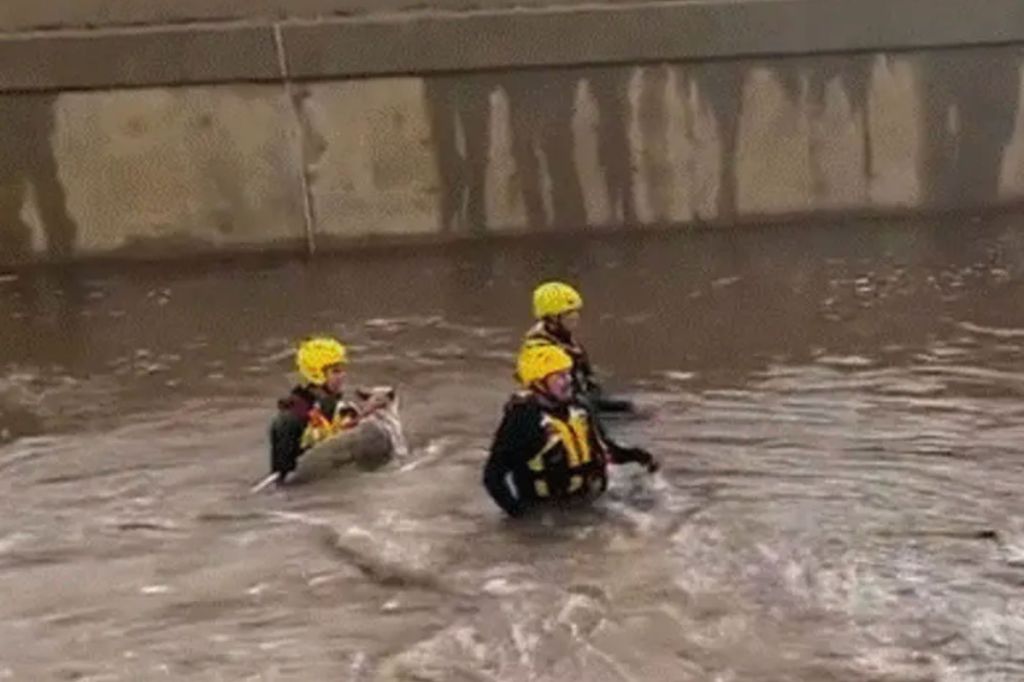 The Pineapple Express supercharged a bomb cyclone that made landfall in California on Wednesday, dropping several inches of rain throughout the state. Nearly 4 inches of precipitation have fallen in Goleta, California, causing the San Jose Creek to swell. According to the Montecito Water District, the region received days’ worth of precipitation equivalent to a year’s worth.

When firefighters arrived, they saw a dog poised on the edge of a crate. The fast water was twisting and spinning the box, causing the animal to cling to the edge and continuously readjust itself.

Due to the cement barriers along the creek, the puppy was unable to jump into the raging river and swim to safety, so it was forced to hold on.

Three members of a rescue team used ropes to pull the dog to safety. They then successfully extracted the dog from the water.

Both canines are unhurt and have been reunited with their owner. The storm event has continued to endanger creeks and rivers. Please maintain a safe distance from all waterways during heavy precipitation and high creek levels. pic.twitter.com/E8MHaaF5Fe

Firefighter footage showed rescuers using long poles to secure themselves. Two attempted to shield the third from the swift stream while holding the dog.

On January 5, 2022, a swift water rescue team guides one of the dogs to safety in a quick-flowing creek.
Scott Safechuck

They dragged it downstream so they could climb out of the creek, and as soon as the group reached the bank, the dog jumped into the arms of the man in orange.

Animal control workers dried off the thankful dog with a towel before showering the almost-dead animal with affection.

Santa Barbara Fire stated that both dogs appeared unharmed and were pleased to be restored to their owner on solid ground.