Skip to content
Go Home «» News «» Breaking News «» During an ocean battle in Western Australia, a turtle fights off a shark 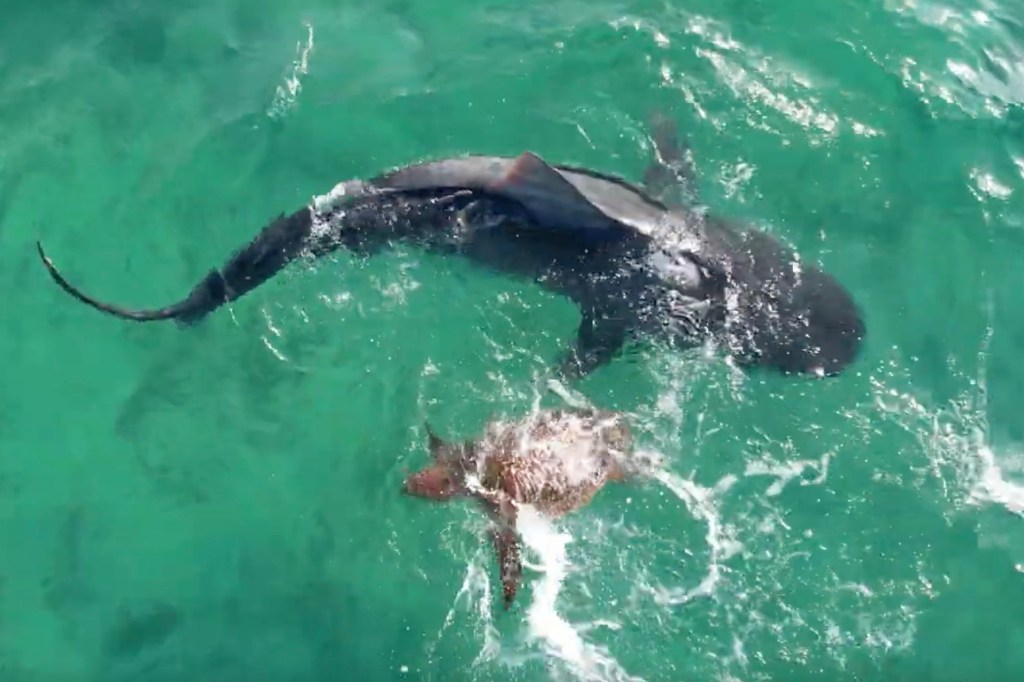 Off the edge of a beach in Western Australia, dramatic film showed the moment a loggerhead turtle defeated a tiger shark.

Jack Garnett, the pilot of the drone, told Storyful that he captured the breathtaking footage on the final day of a family holiday to the Winderabandi shore. His three adolescents had previously encountered the loggerhead and fondly dubbed it “Mr. Turtle.”

“On our last day at Winderabandi, the girls spotted some strange water splashes 50 meters off the coast, and the drone was dispatched to investigate,” he told the paper.

“Initially, I warned the children not to view the drone video link since it looked that a three-meter-long tiger shark was devouring Mr. Turtle,”

However, the turtle utilized its shell to repeatedly roll over the angry shark, so avoiding many attacks.

“Over the following ten minutes or so, our family was absolutely astounded as we clustered around the television, enthralled by Mr. Turtle’s epic struggle with the tiger shark,” Garnett recalled.

The turtle utilized its shell to perform many flips in order to evade the shark.

“A single error by Mr. Turtle would have resulted in a severed limb or lethal bite,” Garnett said. “It was a remarkable result to witness him swimming effortlessly and at maximum speed down the coast at the conclusion.”

Garnett has subsequently shared the footage to marine experts, who identified the turtle’s resourcefulness as “typical behavior” for its species. They also determined that the fortunate tortoise was a female based on the form of its tail, observing that its speed and agility were advantageous in the battle.

The Wildlife Conservation Act of 1950 lists loggerhead turtles as an endangered species in Western Australia. Often weighing over 200 pounds, they are distinguished by their rusty-brown colour.

Garnett claimed, “They had never seen film that recorded [a battle] so clearly, and turtles often don’t win.” They stated that turtles are often referred to as’sea-biscuits’ by tiger sharks since they are a preferred diet of the top predators.

The turtle was eventually recognized by specialists as a female loggerhead.
Jack Garnett through Storyful

While Garnett and his family have returned home, they will never forget their meeting with the unique turtle, with one exception. “My children have also rechristened the turtle Mrs. Turtle,” added Garnett.

»During an ocean battle in Western Australia, a turtle fights off a shark«