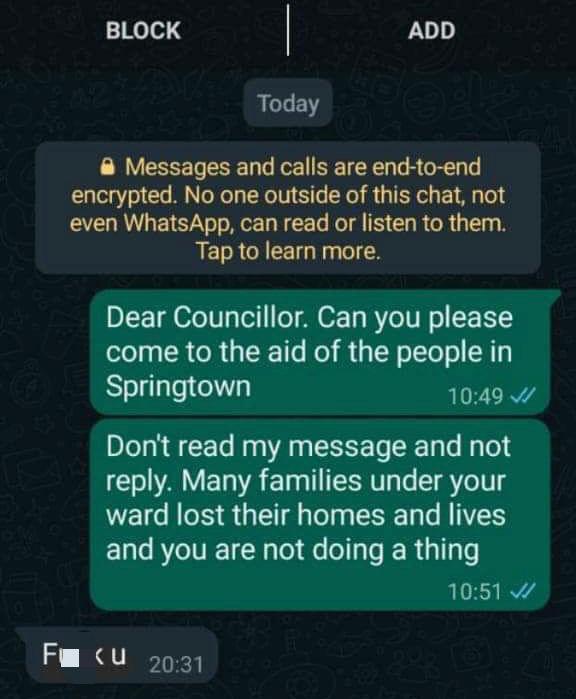 An eThekwini ward councillor has apologised for swearing at a resident who asked for assistance after devastating floods wreaked havoc in KwaZulu-Natal.

Themba Mkhize, eThekwini ward 25 councillor, texted “f**k you” to a Springtown resident who asked for assistance and intervention via Whatsapp and complained two minutes later that the councillor was ignoring pleas for help.

A screenshot of the exchange was circulated on social media on Sunday evening. In the message, the resident asked for the councillor to “come to the aid of people in Springtown” at 10.49am. Two minutes later, the resident sent another message: “Don’t read my message and not reply. Many families under your ward lost their homes and their lives and you are not doing a thing.”

About nine hours later, the councillor responded with two words.

Mkhize verified the authenticity of the screenshot, saying it was sent out of anger when he took offence to the resident’s accusation.

A Whatsapp exchange which forced a Durban councillor to issue an apology after swearing at a resident who asked for assistance. The visual has been edited to remove the offensive language.
Image: Supplied

He said the exchange was made on Wednesday after he had been out in the field.

“People died and others are missing so I didn’t have time for Whatsapp. Then I come home after a long day only to find this person saying I’m sitting down and doing nothing, but that doesn’t right what I said.

He said since then the resident and his friends have harassed and sworn at him.

“They were calling me last night around 10pm demanding I deliver water to them immediately. These people are fighting another war that I can’t entertain.”

Raeesa Joosab, who posted the screenshot on Facebook, told TimesLIVE that the community was outraged by such a response from a public representative, especially under the circumstances.

“We understand it is not government’s fault, it’s a natural disaster, but they [councillors] are elected to that position to help during our hour of need. Who else should we ask for assistance? He could have responded better, like saying they are working on fixing the situation, but to swear at a concerned citizen?” she said.

Mkhize said he would issue a public apology because he respected his position.

Residents who lost their belongings during the floods in Welbedacht East, Chatsworth claimed their councillor hasn’t provided much assistance.

Residents who spoke to TimesLIVE at the Montford Community Hall detailed their horror experiences that left them with nothing following torrential rains on Monday and Tuesday last week.

Amanda Sikhosana from the Road 745 informal settlement said her wooden shack collapsed on top of her while she was with her children, a three-month old and a six-year-old, on Tuesday evening.

“I heard the sound of the mudslide. It sounded like thunder. I could clearly hear it coming closer and closer but it was so fast that I couldn’t run outside, not without leaving the children,” she said.

All she could do was take cover under her metal single bed and form a human shield with the two children under her.

“I wasn’t even completely under it when the shack fell. The planks hit my right shoulder and my back.”

Fortunately her neighbours were able to assist.

“I was rescued from the ruins by my neighbours. I think they must have been guided by the baby’s cry because it was dark and there were many things to navigate past. The two men were crying from what they had seen.”

Peerbhay who was living on the banks of the Umlazi River after losing her job due to Covid-19, said she and her 18-year old were able to escape before her informal home washed into the river.

“I was left in a state of shock because I was asleep and the next thing everything is crumbling down. My shack is at the bottom of the slope and there are others on top so those at the bottom are buried with everything. I think if we didn’t run out of we would have been washed with into the river,” she said.

“We sat, we cried and we got over it because you can’t cry about it every day. It’s not going to bring it back or solve the situation unless somebody takes time to look into people’s lives and what they went through.”

Residents claimed their ward councillor hadn’t assisted them and that they managed to find temporary shelter at the community hall thanks to eThekwini council speaker Thabani Nyawose.

Siceliwe Ngcobo from the ward committee said: “We didn’t have the hall to house victims in 2019 [during a previous flood] or before and we wouldn’t have it now if it wasn’t for Nyawose. We finally managed to get access on Monday around 10pm.

He said Nyawose’s office, with NGOs, have helped with food and other necessities but they needed sponges and blankets.

As of Monday, the death toll from the devastating floods in the province stands at 443 with 63 people missing.