Skip to content
Go Home «» News «» World News «» Due to high demand, pharmacies are running low on supplies of cold and flu medications 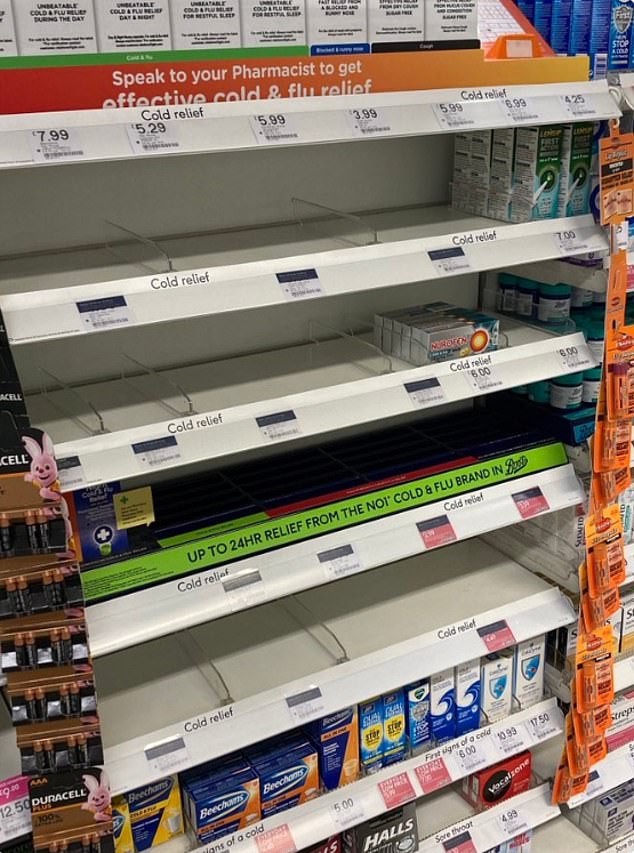 In response to a high demand for over-the-counter cures, pharmacies are running out of the most prevalent cold and flu medications.

As cases of cold and flu continue to grow, folks who are unable to see their primary care physicians are increasingly resorting to store-bought alternatives, according to one industry expert.

The ‘increased demand’ has resulted in medicines such as Lemsip, Day and Night Nurse, and other own-brand cold and flu remedies selling out, with pharmacists capturing images of their empty shelves.

Dr. Leyla Hannbeck, president of the Association of Independent Multiple Pharmacies, told MailOnline that the problem was widespread and not limited to a single product.

People have been photographing empty shelves as supplies of cold and flu medications dwindle.

Some over-the-counter cold and flu medications are scarce, as reported by pharmacists.

She described the current state of affairs as a “horror” and stated, “Pharmacists are sending me images of their empty shelves due to a lack of standard cold and flu medications.”

People are unable to obtain GP appointments and are advised to take care of themselves so as not to burden the NHS.

As a result of an increase in cold and flu instances this season, more people have purchased over-the-counter medications, driving up demand.

Dr. Hannbeck stated that a variety of cold and flu medicines, including Lemsip, Night Nurse, and store brands, were “impossible to obtain.”

Yesterday, customers, some wearing face masks, lined up outside a Boots store in west London as they awaited its opening amid concerns over the ‘twindemic’ of Covid and influenza.

They run out extremely quickly and are inconsistently available, forcing us to inform patients that we cannot provide them.

“The Department of Health and Human Services (DHHS) and the government deny the existence of shortages.” As long as this is the case, we will continue to observe this.

‘During the winter, when so many people are suffering from cold and flu symptoms, as soon as the demand increases a little bit, we’re backed up.’

She stated, ‘It is not just one brand that is unavailable, but a variety of things.

However, we are determined not to cause panic. What we are saying is that some of these essential medications are currently unavailable.

The challenges, according to Dr. Hannbeck, are caused by “problems and delays with manufacturers” and are exacerbated by the absence of solid strategy for addressing supply chain issues.

MailOnline visited Boots locations in London yesterday and discovered that Lemsip Max sachets are completely sold out, with only boxes of ‘day and night’ tablets remaining.

A Boots employee stated, “We have no Lemsip powder or cold and flu sachets of our own brand.” Only Beechams are acceptable.

We haven’t had any in the past two to three weeks. I believe that there are supply issues.

Reckitt, the manufacturer of Lemsip, stated that it was “doing everything possible to minimize the inconvenience” due to the high demand for the medicine during the cold and flu season.

A Boots representative stated, “We have witnessed a greater-than-usual demand for Lemsip.”

‘Many of our locations still have stock, and while there may be temporary shortages in a few, there are typically adequate alternatives available.

If unsure, customers should see their pharmacist for alternate recommendations.

One woman said: ‘Genuine question. Is there a shortage of Lemsip? I’ve been to around eight different stores since before the holidays, and the shelves are completely empty.’

“Yesterday, I began to feel better, and today, happily, only cold-like symptoms remain.” So much of it is present. It has apparently caused a shortage of Lemsip and paracetamol in this area!’

While one individual made light of the shortfall by writing, “Why is no one talking about the Lemsip scarcity? How am I going to handle this case of the flu?’

The DHSC and Haleon were reached out to for comment.

»Due to high demand, pharmacies are running low on supplies of cold and flu medications«