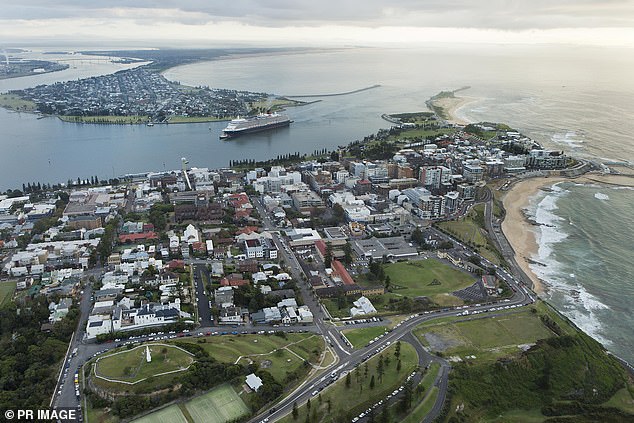 The body of a man wearing technical dive gear has washed up at a busy port with police suspecting he was trying to bring ashore a $20million-haul of cocaine using ‘old school’ smuggling tactics rarely used by modern drug syndicates.

The unidentified diver was recovered from the water along with more than 50kg of cocaine off Heron Road, alongside the Port of Newcastle in NSW, on Monday morning.

Australia’s largest coal port has long been a beacon for international drug importers, with the nation’s most lucrative market for illicit substances – Sydney – just a two-hour drive south.

The route is often referred to among seasoned organised crime detectives as Australia’s drug ‘superhighway’.

Police are now investigating the mysterious circumstances surrounding the death including which crime cartel the man may have working for as they focus in on nearby Panama-flagged ship which sailed from Argentina.

These days they send out a ‘mothership’ somewhere into the South Pacific where there’s little attention from local authorities and a vast amount of ocean to patrol,’ Mr Moroney said.

The vessel will then meet a cruising yacht and fill it up with either Colombian cocaine or Mexican meth.

Police said members of the public and NSW Ambulance paramedics tried desperately to save the man, but he died at the scene.

The drugs were bricks of cocaine covered in thick plastic in a bundle that had been secured with ropes and plastic.

He said the Australian Border Force are now closely examining a nearby ship and its crew.

‘It is a ship that is registered in Panama and it last left port in Argentina before it came to Australia,’ Detective Superintendent Critchlow said.

‘We are talking to all the sailors on board and the Captain as well as offshore authorities.’

He admitted the road between Newcastle and Sydney has become a major target of drug cartels able to hide their dangerous product amongst the constant flow of sea traffic.

‘Anywhere we have large movements of shipping it makes it really open to organised crime,’ Detective Superintendent Critchlow said.

Police are yet to reveal if the drugs were floating in the water or recovered from the hull of a vessel.

But the various packages of white powder believed to be cocaine is in excess of 50kg with a potential street value of $20million.

Police are appealing for anyone who may have witnessed something unusual in the area to come forward.

‘At about midnight on Sunday, May 8, an inflatable boat – a rubber ducky for lack of a better description and a Quintrex runabout with a green stripe – was seen in the vicinity of the ship which was a berth 2 at Heron Road at Kooragang Island which is in the south arm of the Hunter River,’ Detective Superintendent Critchlow said.

‘So we are asking anyone who may have been in the port, in the river, who saw some strange activity on Sunday evening or Monday morning to call Crimestoppers.’

Police divers will continue to scour the bottom of Australia’s largest coal port on Tuesday.